On giving the first ever technical workshop at the Harry Bayley Observatory in 1978, one of the first tasks  of attendees was to build an effective cross staff to measure angles in the sky. This ancient instrument was probably first used as long ago as 400 B.C. by the Chaldeans to make basic angular observations and computations.  One such measurement was to get the zenith distance (φ)  of the pole star, and thereby to obtain latitude. Thus, if  φ = (90 - Lat) then:  Lat =  90 - φ.


The device is relatively simple to construct, as indicated in the link below for any who might be interested:


But before one can use it one must become familiar with the system of angular measure. Say that one wishes to get the distance between the Moon and Saturn such as depicted in the star map (from my planetarium program) below:

It is useless to use a linear measure such as meters, feet or inches because these have no meaning when referred to the sky, or celestial objects in it and distances between them. So we use degrees. But given degrees are only one unit, and many objects (e.g. double stars) are much nearer, say fractions of a degree, one must be able to use smaller measures too.

As for the cross staff shown in the image above, that is mainly used to measure degrees.  For  a basic cross staff one can generally measure from 15 degrees to 60 degrees with a fair amount of accuracy.  For angular measures up to 15 degrees, and as low as one degree angular measure, one's extended hand - in addition to the stars in the Big Dipper  - provide a useful basis, e.g. 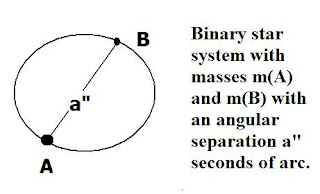 It should come as no surprise that planetary widths - given they are tiny - would also be registered in arcseconds or ". Thus, the giant planet Jupiter can be seen up to 50" in diameter. Mars will reach 24" in 2018 at a close opposition. Neptune is 2" and Uranus is 4".  (Pluto's angular width is barely 0.1").  To fix ideas, to magnify Pluto's disk to one arcminute width (i.e. 1/30 of the full Moon's diameter) would require a magnification of:

For completeness another angular measure used is the radian.

But this must be in radians before one can compute the solar constant, for example.

One radian (1 rd) can first be converted into arcsec as follows, given there are 3600 arcsec per degree.:


Problems for the budding astronomer:


1) Two observers using cross staffs obtain zenith distances from their respective locations of   φ = 45 degrees, and  φ =  35 degrees. How far apart in latitude are their locations?

3)  What telescope magnification would be required to observe the planet Uranus as a disk 2 arcminutes in diameter?

Construct your own cross staff using the directions in the above link, then use it to measure the altitude of the star Deneb in the constellation Cygnus.   Hint: see the star map at: