As They Celebrate Castro's Death, Miami's Cubans Would Do Well To Remember... 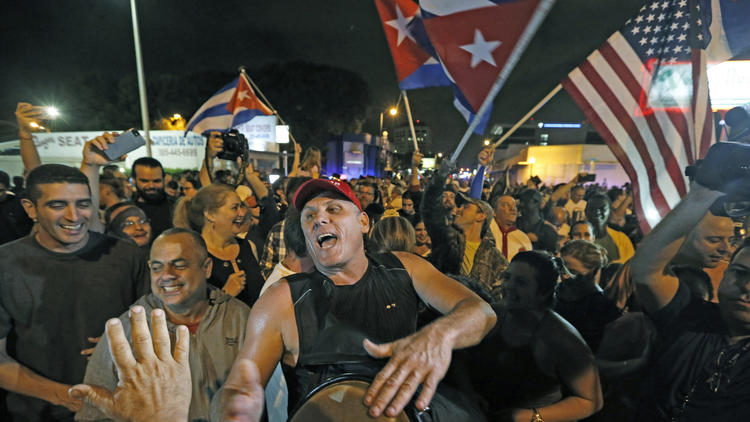 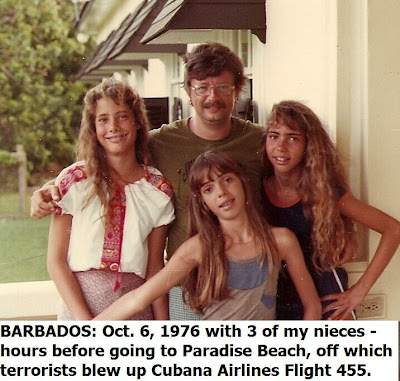 The 73 innocent souls blown out of the sky off Barbados' southwest coast on October 6, 1976. Blown to smithereens by a cabal of anti-Castro extremists - fighting for "freedom" - but taking their wrath out on the Cuban fencing team and family. All regarded as "targets of opportunity" by Orlando Bosch, one of the masterminds, and Luis Posada Carrilles.

The true fact here? Cuba was the victim of the worst state-terror attack in the western hemisphere before 9/11 and it came from the U.S. This was instigated by the CIA on Oct. 6, 1976 using a Venezuelan- based former CIA asset (Luis Posada)  to blow up Cubana Airlines Flight 455 killing all 73 on board.

Certainly the event is just as emblazoned in Barbadian neurons as the 9-11 attack for those in New York. Maybe worse,  since the scale of Barbados is radically smaller than New York, or the U.S. On a national scale of devastation, that Cubana Airline bombing took out a percentage of people equal to 0.03% of the total populace, while numerically as a %, 9-11 took out roughly 0.0001%. Thus, in purely proportionate numerical terms, Cubana 455 was much deadlier. But sadly, it's not on most citizens' radar - certainly not in the US Of A.

I was at the Paradise Beach on the southwest coast of the island with my five nieces when it occurred. We witnessed the plane come down, and wondered what the hell had happened – then watched in horror barely an hour and a half later as bloody body parts began to wash ashore. Even now, as adult women, they're unable to venture anywhere near that particular beach.

The prevailing thought at the time was some malfunction occurred and the plane just blew up more or less by accident. It was only years later that it was ascertained that the two questioned in Barbados were hired thugs commissioned by anti-Castro extremist Cubans and the CIA . As former federal agents Warren Hinckle and William Turner noted in their excellent book, ‘Deadly Secrets: The CIA-Mafia War Against Castro and the Assassination of JFK’ (p. 384, Thunders Mouth Press, 1992):

“Two men who had deplaned in Barbados, Freddy Lugo and Hernan Ricardo Lusano, were interrogated after joking about the bombing in a Barbados taxicab. The two were employed by Luis Posada…and confessed that Posada and (Orlando) Bosch had supplied them with two bombs, which they planted on the Cubana aircraft.”

Luis Posada  Carriles - state-sponsored  (by the U.S.) Venezuealan terrorist, who was allowed U.S. sanctuary by George Bush Jr. and never extradited for trial in Venezuela.


According to a secret CIA cable dated Oct. 14, 1976, intelligence sources in Venezuela relayed information about the Cubana Airlines Flt. 455 bombing that tied in  Alpha 66 terrorist Orlando Bosch, who had been visiting Venezuela, and Posada, who then served as a senior officer in Venezuela’s intelligence agency, DISIP. On his arrival, Bosch was met by a CIA operative and Posada, according to the report. Later, a fundraising dinner was held in Bosch’s honor. “A few
days following the fund-raising dinner, Posada was overheard to say that, ‘we are going to hit a Cuban airplane,’ and that ‘Orlando has the details,’” the CIA report said.

Meanwhile, those of us living in Barbados at the time had no remote notion of the bloody act to come, nor of the U.S. complicity in it, or that the same right wing Cuban renegades - whose associates conspired in the JFK assassination -  were part of it. The CIA Report went on to read:

(Note the CIA's  sanitizing of language, the use of "crash" instead of bombing, or what we call "collateral language.)

Years earlier, the U.S. had planned massive terror attacks not only on Cuban soil but in the U.S.  - to blame on Fidel Castro, in order to foment a full scale war and invasion of the island. We have the records that document  the extent of it, e.g. 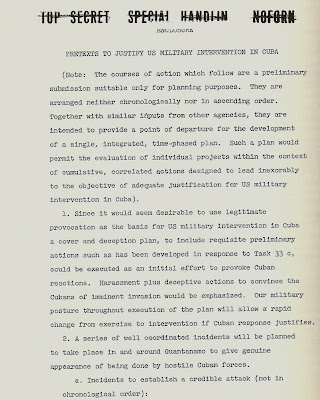 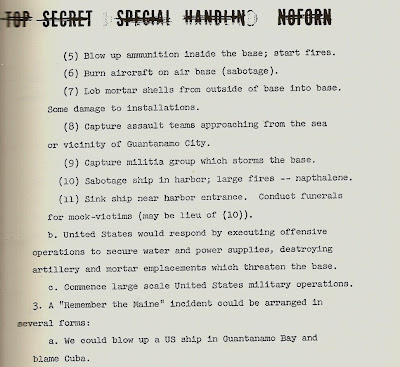 This was none other than Operation Northwoods.  In Operation Northwoods the Joint Chiefs of Staff of the U.S. military planned a campaign of terror, to include the sinking of refugee boats (carrying Cuban refugees) on the high seas, as well as the killing of innocent citizens on American cities’ streets, plus random bombings carried out in Washington, DC, Miami and other places. What was the  motivation? Author James Bamford shows (Body Of Secrets, pp. 82-83) it was to incite an invasion and war against and enable the to invade and overthrow Fidel Castro.

It is interesting, historically, to note that the bulk of Cubans who fled as refugees  after Fidel Castro overthrew the jackboots of Dictator Fulgencio Batista, were of the middle class. They fled because they were no longer able to get the easy perks they could under Batista, given Castro wanted to redistribute the island's scarce resources. And since Cuban intelligence learned of plans to try to topple Castro long before he turned to the Soviet Union, his decision was made much easier regarding which nation had his best interests at heart. Most of Miami's entitled Cubans celebrating on Calle Ocho forget that.

I  beheld these entitled Cubans when they first arrived in Miami in 1962 via "Operation Pedro Pan" - given most had been in elite Catholic schools and their parents were horrified at the prospect of a "communist education".  They arrived at my high school, Mgsr. Edward Pace, and were given free textbooks, clothing,  housing, as well as paid tuition compliments of the Miami Archdiocese. Meanwhile, I had to work after classes to pay my own tuition. Do I necessarily begrudge them? No, but I want them to stop their whining now, and disgusting celebrations on the death of a ninety year old man who - let's face it - had been literally on his death bed the past ten years. As Janice opined this morning: "Maybe if they get it all out of their system they'll behave from now on." Miami's Right Wing Cubans? No way.  They'll find some other grievance to chew on with Raul Castro, just stay tuned.

Much of the travail and Castro reprisals were due to the U.S. own attempted interventions and mischief. In each case it forced Castro to tighten the screws of security further including scoping out domestic enemies - like Orlando Bosch and cohort.  Thankfully, after the October, 1962 missile crisis, John F. Kennedy attempted to end the awful relations via rapprochement with Castro through his aide de camp Renee Vallejo and JFK's go between, William Attwood.

Attwood, a lawyer, who had earlier negotiated the release of the prisoners who was to be instrumental. He was charged by JFK with becoming the first American emissary to secure Castro’s ear and trust. In particular, to show good will and good faith, Attwood arranged for $62 million in medicines and food aid as part of the prisoner deal.

Attwood was also continually active in the spring of 1963, securing the release of other prisoners, including three CIA operatives held in Cuban jails. What derailed the effort, ending it violently with the Kennedy asssassination? Likely the CIA getting wind of the plan, especially given they were still enraged by Kennedy's reaction after the Bay of Pigs.


Probability of cross-Agency leakage would’ve occurred when ABC News reporter Lisa Howard offered herself as an intermediary, and her apartment in as the venue, for the first bilateral talks between and Cuban officials.   Certainly, the Agency’s eyes and ears would’ve been turned (tuned?) toward Howard after she did a fairly sympathetic TV special on Castro in April, 1963.   Might they have bugged her apartment and listened in? Possible, but they may not have had to – since a “high society” crowd attended and these may well have provided all the extra source leaks the Agency needed to plan ahead for what it wanted to do.

By September 24, 1963, Robert Kennedy had informed Deputy U.S. Ambassador to the U.N. William Atwood, that Jack might be able to meet Castro, but not in . may have been suggested as an alternative. By then many of us suspected that the conspirators had a plan afoot to possibly take out Kennedy in September. We didn't realize it already had been planned for Dallas in November, using at least one team composed of Cuban exiles from the Bay of Pigs with  vengeance on their minds.

With Trump now likely to assume office in two months,  all the progress toward Cuban relations launched recently by Obama will be upended and we 'll return to the same Cold War mentality as before. That is something, along with the memory of  their 73 countrymen blown out of the sky 40 years ago,  Miami's Cubans ought to weep over -   rather than celebrate.