How Did We Go From Astronomical To Atomic Time?

The Astronomical clock at the Royal Greenwich Observatory.

Me, standing astride the Greenwich meridian which separates the eastern and western hemispheres, in July, 1978.

A question that often comes up during astronomy lectures concerns astronomical time- keeping. Most educated people are at least aware that it's based on the motions of the Earth (rotation and revolution) with respect to the Sun.  For much of the past 150 years precision astronomical timekeeping has been carried out from the Royal Greenwich Observatory outside London. (See images above). This is also the venue through which the Prime Meridian (0 degrees longitude ) runs, separating the eastern and western hemispheres and which I had the honor of standing astride in July of 1978.  As we were informed by one specialist at the time, this is the location from which Greenwich Mean Time is measured and which clocks around the world have adopted.

First things first, A “time zone” is defined by taking the 360 degrees through which Earth rotates in one day, and dividing it by 24, since it requires 24 hours to make one revolution. Thus, one standard time zone would be generated via (360 deg/ 24 hr) = 15 deg/h or 15 degrees of longitude per hour - so be 15 degrees of longitude in expanse. Thus, time zones (calibrated per HOUR) were marked out by LONGITUDE differences.

In order to solve the problem of different local mean times, Greenwich Mean Time or GMT was developed, so people could compare the same clock times around the world. GMT is based on a 24 hour clock defined at the Greenwich Meridian. So, for example, if one is listening to the BBC from New Orleans and the time given is 13h 30 m GMT, then that means it’s 1.30 p.m. LMT in London. Since New Orleans is 6 hours earlier, than that means it’s 7.30 a.m. local mean time in New Orleans.

Thus, knowing GMT, one can always work out the time at one’s location if one knows the longitude difference relative to Greenwich. (Note for the purposes here, I ‘m taking London as having the same longitude as Greenwich. It's actually off by a few thousand feet but negligible in terms of computations.)

In the above discussion the key thread is that timekeeping was a more or less sensible operation, meaning it could be related to an actual object (Sun) and its apparent motions as seen from Earth. The problem is that over the centuries that followed time keeping became ever more abstract and also more refined in the sense the increments got smaller (ultimately reaching the second defined as 1/86,400 th of the time from one noon to the next.

By contrast, the fictitious Sun is not so regularized so its motion is erratic. This is also referenced to what we call "apparent solar time" or "sundial time".  Based on comparisons of the two, one can then compute what is called the "equation of time", see e.g. 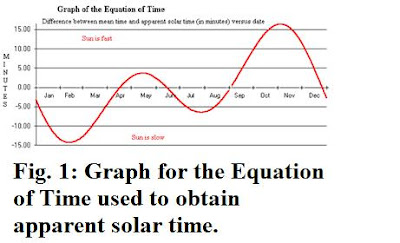 The above concepts are, of course, idealizations. In truth, the Earth's rotation rate is not stable over time, hence the lengths of time - especially the second- will be affected. Every tide that strikes the beaches of the planet takes energy out of its spin, through the combined actions of Sun and Mon.

This is good to know because it set the stage for atomic time. Why atomic time? Well, because atoms are not affected by tides.  Thus it was near the middle of the last century physicists decided that the "second" needed revision. Indeed, the second was not the second at all (1/86, 400th of an Earth rotation) but instead was equivalent to 9.2 billion oscillations of a microwave beam when tuned to the frequency of a cesium atom. The clear advantage is that one no longer needed to look at the Sun to set clocks. Thus did Judah Levine announce at one global time conference:

"I have bad news for you, Britain. We are stealing the Greenwich meridian!"

Which brings us to the singular disadvantage of atomic time: It is no longer sensible in the way that solar time had been. While one could mark the passage of time from noon on one day to noon the next and multiply by 60 minutes per hour then by 60 seconds per minute - then take the reciprocal, how could one process - far less measure - 9.2 billion oscillations of a microwave beam when tuned to the frequency of a cesium atom?.

Never mind, the accuracy is needed given much of the world (especially in the financial- commercial arena) now requires sub-second accuracy. For example, for financial clients latency is crucial. This means the time elapsed between ordering a trade and when it actually happens. Even a two second delay in the flash trade sphere could mean millions lost for some high end users.  These typically make dozens or hundreds of trades per second so even a millisecond delay is critical.

Note again, atomic time is not a system that has or needs time zones. It works on Universal Coordinated Time, or effectively GMT applied to every location on Earth.  Since the accuracy of worldwide UT is governed by atomic clocks, there is no tolerance for such things as "leap seconds". For reference, a leap second was last added to electronic clocks at midnight universal time on Saturday, June 30, 2012, with atomic clocks reading 23 hours, 59 minutes and 60 seconds before then moving on to Greenwich Mean Time. (Other leap seconds were added in 2008, 2005 and 1998.)

The leap second is added in order to compensate for changes in Earth's rotation.  But the worry of the atomic time lords is that if we get a leap second wrong it could  lead to global financial catastrophe. For example, if Tokyo markets are out of synch with New York's for even a fraction of a second and thousands of trades are delayed. Or, more technically, let's say for a 2 second period it is not possible to distinguish UTs of 00:00:00 and 00:00: 00 the next time, i.e. after a leap second is added. Then the order of trades would be impossible to decipher.  As far as any financial regulators would be concerned, causality itself would be reversed.

But Britain's time managers say 'hogwash' to this. The Greenwich Observatory position was best stated by Peter Whibberley in 2013 after a failed conference in Geneva:: "Removing the leap second would not be a minor technical change, but rather a fundamental change. Ever since mechanical clocks were created we have always adjusted to model the rotation of the Earth."

But the atomic clock masters aren't buying it, and therein lies the conflict and the basis or failing to resolve the issue.

Former British science minister David Willets, however, is unrepentant about British intransigence. As he notes:

"If we just fixed time by the atomic clock it would, over centuries, diverge from time as measured by the rotation of the Earth. The Sun would then not be at its highest in the sky at noon. The (Prime) Meridian would no longer be at Greenwich but slowly heading towards Paris. Leap seconds allow us to keep the time of day linked to the rotation of the Earth even as it slows. The purists disapprove of this but we should not sever the link between time and the pattern of our lives on Earth."


I for one believe he makes a solid point. Already technological gizmos (see previous post) have majorly impacted social areas of our lives, wreaking havoc in many as they are unable to break free of the electronic social twitter tethers. Now add in disruptions of time perception, where one might look to see an estimate of the time - say by the Sun's altitude in the sky- and behold it is totally out of synch with one's quartz watch.   All this plays into the horrific picture painted by Morris Berman in his book, The Re-Enchantment of the World, portraying a grim time when humans have lost all connections to the natural world .

Do we really want this in the interest of efficiency? At least for the time being any changes regarding the leap second will be postponed until 2023 when the next time conference meets.