"You Can Have A Good Life With Just Gig Jobs!" - More Lies From The Neolibs 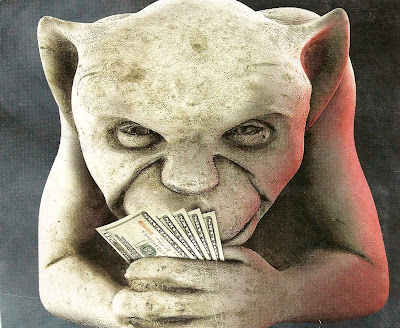 It is little wonder most citizens can't keep up with the array of interests inveighing against their welfare. They barely have time to keep up with their jobs and time demands on the home front, including caregiving for elderly parents or raising kids, far less sustain their reading. The last, especially on political and economic issues that most concern them.  Yet they are foolishly browbeaten to have more kids to keep up the necessary economic activity to avoid a low growth, flatlined GDP.  See e.g.

As I wrote in that prior post, the Neolibs are wrong  because it is just too damned expensive for most people to raise a single child (especially without full government assistance) to maturity, far less more. Ask Paul and Shannon Tweed (TIME, Oct. 24, p. 40), where we first learn they "had found an in-home child care provider who charged $500 a month. But two years later the monthly cost doubled when a second child was born."

"Now, every month the Tweeds spend $1,100 out of pocket to care for their kids while they work, just $28 less than they pay for their mortgage."

And in addition: "If their basic costs were not overwhelming enough their oldest son was diagnosed on the autism spectrum."

Of course, the Neoliberal solution to the Tweeds' plight is to offer "tax credits" which, as Shannon Tweed observed,  would barely cover one fifth of their out of pocket costs. But hey, it's a  gimmick the Neoliberal pols love and we'll be sure to see lots more if Trump somehow sneaks into office. Then he will  need plenty of tax credits to implement the 40 percent cuts to gov't programs he wants to support his tax cuts. A new iteration of "let them eat cake"? Maybe.

Enter a recent NY Times Business Section essay, 'Good Lives Without Good Jobs', in which we learn "94.6 % of jobs added from 2014 to 2024 will be in the service sector" in other words, poorly remunerated and putting more pressures on families than even the Tweeds ($72,000 /yr. earners) have experienced. Where can those families go for help? The corporations won't help, they're already cutting worker benefits, e.g. "fewer employers are providing health insurance to their workers."  Other employers are making them pay much more via higher deductibles. As finance columnist Jill Schlesinger wrote in yesterday's Denver Post Business Section:

That is the amount workers themselves will have to pay, on average, before  their insurance coughs up one thin dime for their health care. And it's getting worse.

Then we get to the nitty gritty:

"American policy makers have responded to the declines of high wage jobs and generous employer benefits by gradually expanding the role of the government in ensuring that Americans have adequate income and adequate benefits. Most of this expansion has taken place in what the political scientist Christopher Howard calls 'the hidden welfare state'".

The authors go on to assert:

"This huge government sector is made up of tax credits, federal grants in aid to the states, and low interest loan programs like student loans. Many of these indirect programs, like entitlements and tax breaks for health care, retirement and housing, are not counted as part of the conventional federal budget."

Failing to note that a good portion of military, defense spending isn't either. Indeed, the Pentagon still isn't held to regular account for its spending, or over spending, including on boondoggles like missile defense and the F-35.  Former defense analyst Chuck Spinney pointed out in a 2002 Bill Moyers interview how the Defense Dept. still can't account for  $1.1 trillion they were given in the 1990s.

At this point, let's be reminded of what the Neoliberal agenda is all about, citing the words of Baltimore Sun columnist Jay Bookman ('The New World Disorder', 1998):

"The global economy has been constructed on the premise that government guarantees of security and protection must be avoided at all costs, because they discourage personal initiative."

If this is so, then logically the Neoliberal will be foursquare against any and all government assistance or expansion of services which they call "socialization of benefits".  Playing into this meme, the authors write:

"In terms of social welfare spending, the United States seems miserly compared with many other developed nations. But according to a recent study for the Peterson Institute for International  Economics by Jacob Funk Kirkegaard, this is an illusion. When tax -favored, private social spending is combined with public spending, American public expenditures at 20.8 percent are only a little lower than the average of 21 states in the European Union."

But this mixes apples and oranges, and especially can't be trusted coming from the likes of  the Peterson Institute. As I pointed out in a post from 2013, in focusing on the 'Fix the Debt'  operation e.g.

"SourceWatch’s  site PetersonPyramid.org informed us that, in reality, the “Campaign to Fix the Debt” was just the latest effort by Peter G. Peterson and a bunch of his billionaire friends and corporate cronies to chop away at Social Security and Medicare. All in the name of fixing America’s “debt problem”.

In other words, the Peterson bunch is at the very heart of the Neoliberal program to strip economic security from citizens.  As for the quoted section above, let's be clear "tax -favored PRIVATE social spending" is just a fancy euphemism for charity. So the Peterson PR hack is comparing the likes of millions like me donating some $1,500 a year to charities with government public spending and services.  (Also, let me insert here that I - like many others - don't get anything "tax -favored" because we don't meet the threshold for charitable donations to make deductions.)   So, the correct comparison is between total American public spending, no charity component, and total EU public spending - which when done- does indeed show the American contribution is "miserly". And these two are compared on the bases of taxes paid in, not tax deductions for charity by private persons, groups,

But see, the PR machine of the Neoliberals can't afford to allow such rational, logical comparisons because it contradicts their narrative that people in this country really are on their own, and were it not for charities - like Covenant House, Salvation Army, CARE etc. as well as open soup kitchens and food pantries,  there'd be many millions more homeless and hungry each year.

The actual Neoliberal bent of the authors emerges at the very end, when we behold their prescription for the American worker:

"Until most American workers are persuaded that they will not be worse off in a system characterized by flexible work arrangements and partly socialized benefits  they make continue to make unrealistic demands .... Politicians should tell working Americans what they need to hear not what they want to hear. And what they need to hear is that it is possible for all Americans to have good lives, even if they can't have good jobs."

In other words,  lo and behold,  the "good life" is possible without having a good job. Just put together fifteen or twenty "gig" jobs (e.g. Uber, Task rabbit)  a day and you might make it too!  Oh, and just be sure you don't have more kids than you can afford, especially for child care and college. It also will help to have a list of charities ready in case you need food or services.

What these Neoliberal purveyors of bollocks- like at the Peterson Institute - always neglect to mention is that in order to have a "good life"  the nation must increase the availability of high productivity jobs that pay superior wages.  There are no short cuts here, and insisting workers suck it up and go the route of "flexible work arrangements" (Gig jobs) is an insult to working families everywhere.

What is needed then is not more trade deals to dispatch good jobs overseas, but massive capital investment in the U.S. by the same national and multinational corporations that stand to benefit from the current 'hyper-globalization".  It cannot be done by a few nips at the margins, or by tossing a few dried bones to the Plebes in the form of special job training, trade adjustment assistance or other public welfare spending.

But any success on this score implies we the people gaining control over the Neoliberal Plutocrats like Peter G. Peterson, as opposed to them running the system to our disadvantage.