Yes, College Rankings Are A Marketing Ruse - And Joke 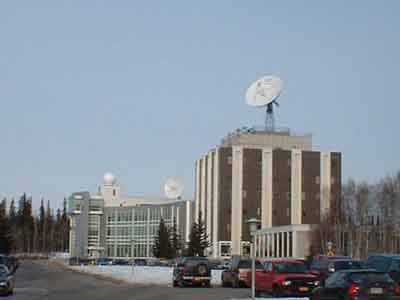 The Geophysical Institute at the University of Alaska -Fairbanks. Most likely you will not find UAF listed in U.S. News & World Report's Annual College Listings - but that doesn't mean it's not a great university.

Frank Bruni's NY Times' Review Op-Ed 'Why College Rankings Are A Joke' (Sept. 18, SR3) merits commendations for exposing the annual college rankings marketing racket.  From numerous points of view Bruni skewers the commonplace trope that a media listing of colleges, universities can provide a seminal insight into quality. And, of course, which schools always end up at the top? Well, the Ivies because they peddle their brand most ardently and invest the time in advertising, and marketing that brand to too many gullible parents- who then join battle with tens of thousands of other parents. All intent on getting Junior or Missy into the "best" school.

But most of this effort is doomed to end up merely with outstanding college debts, and the graduates will leave without having received the specific education they expected. Whereas, if they hadn't been blinded by the brand they might have made a more judicious pick.  As Bruni puts it:

"The rankings nourish the myth that the richest, most selective colleges have some corner on superior education."

Bruni's beef is that this annual high branding exercise fails to recognize excellent public institutions - especially those that may evince superiority in a specific field, discipline. A case in point was the University of South Florida ca. 1968-75 featuring the best quality work in astrometry in the nation, thanks to its Chairman, Prof. Henirich Eichhorn.    Astrometry is the branch of astronomy that deals with accurate determination of stellar positions (in Right Ascension and declination), for the purpose of creating reliable star catalogues. It also entails analysis and determination of the proper motions of celestial objects, as well as highly specific motions including: precession of the equinoxes, lunar libration and astronomic nutation. Prof. Eichhorn also brought in astronomy staff from Yale including Sabatino Sofia, James. H.  Hunter and Carol Williams, launching USF into the top tier of astronomy departments.

Flash forward to the present: if one searches the annual U.S. News rankings for the University of Alaska-Fairbanks, for example, the chances are it will not be found. The lame conclusion based on the ranking elite bias will then be it is not a place worth attending, but this would be a gross error. In terms of specific fields, atmospheric science and space physics, there is perhaps none better. We are talking here not only about the quality of the staff but the resources, e.g. available at the Geophysical Institute.

UAF, for example, has been at the forefront of Arctic atmospheric research - much of which is conducted at the Climate Research Center, e.g.


There is also Poker Flat, the world's only scientific rocket launching facility, e.g.

For space physics in general, including the study of the aurora, substorms and solar-terrestrial dynamics it has all the resources the dedicated researcher needs, see  e.g.

Given the UAF location and its facilities you won't find a better place for studies in ionospheric, infrasound and magnetospheric physics, as well as space weather. Harvard certainly can't compete in these specialized fields, nor does it have comparable resources.

All of this underscores points I made two years ago concerning a fact too many wannabe collegians and their parents overlook: it makes very little difference which university you attend (assuming it isn’t a ‘for profit’ or online version). It is more the cachet and reputation of the specific department.

From the May 2011 issue of MONEY magazine: "Don't assume an Ivy League education is better than one from a public or state university."

MONEY found that  'bang for the buck' included college graduation rates and post-college success rates - which compared favorably to - or exceeded  - what one obtained from the hallowed Ivies. Alas, this has still not trickled down into the mainstream media where we still find "Best Colleges" lists spread around with the Ivy Leagues on top - then all the rest. So no wonder students and their parents are neurotically driven to believe the Ivies are the  only route to success.

From Bruni's piece, it is highly instructive to see the assorted factors - all highly subjective- that are used to arrive at the rankings.  For example, one is how highly officials at peer institutions rank said school. But as Bruni observes, if they know little or nothing about it (especially for the specific field) why would you expect anything other than a low to mediocre rank?  In such a case it is more plausible they'd go by the "reputation" - but where does that originate? Well, usually from earlier US News rankings! So it's a case of subjective brand incest piled atop more perception incest.

In toto, the cumulative parameters drive perceptions in one direction. To quote Bruni again:

"Intentionally or not, they fuel a frenzy to get into the most selective schools. But they can't adjust for how well certain colleges serve certain ambitions."

What if a high school student then, has an intense interest to study the aurora? Maybe he saw images of it firing up the Arctic sky in a PBS documentary, and now wants to study the physical mechanisms driving it in detail. Will he be able to do this at Harvard, or even MIT? Not very likely. At least to the same extent as actually being in the Arctic and having access to resources such as provided by the Poker Flat rockets, or HAARP (High Frequency Active Auroral Research Program).  As noted in the Wiki article on the program:

"According to the HAARP team, this (research) will advance the study of basic natural processes that occur in the ionosphere under the natural but much stronger influence of solar interaction,"

My point, and I believe Bruni's, is that it would be a crime to dispatch this student to some university which would not be able to fully satisfy his intellectual curiosity, and provide him a future trajectory for productive work and research. But if his parents only go by selective US News rankings, that negative outcome is very likely.

One of the worst travesties of the annual rankings racket exposed by Bruni is that "many college presidents, provosts and deans of admissions express disdain for the rankings...but participate in them nevertheless."

The Existentialist Jean -Paul Sartre would have a precise word for that: "bad faith". At his Loyola University appearance in 1964 he defined it as a person deceiving himself into being convinced he lacks real freedom of choice, usually because he harbors a fear of potential adverse consequences. Thus, the college provosts, presidents  admissions staff etc. know the 'best college' rankings are just media branding bunkum but nevertheless kowtow to them because they believe their peers will look askance at their hostility, perhaps question their credibility.

Perceptive citizens, especially parents, shouldn't be so hamstrung because they have nothing to prove to anyone else. If they are truly dedicated to the welfare of their charges they will do what is best for them- and that means securing the best college for their particular talents.
Posted by Copernicus at 8:02 AM