Local Profs Right Not To Debate Climate Change With Students 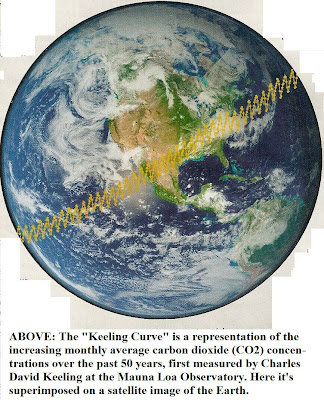 In the latest kerfuffle over climate change - under the "Specious debate" banner,  The Colorado Springs Gazette reported on an email sent by University of Colorado at Colorado Springs science faculty. The relevant portion of a copy (sent to The College Fix by a student in the course). is shown below:

"The point of departure for this course is based on the scientific premise that human induced climate change is valid and occurring. We will not, at any time, debate the science of climate change, nor will the ‘other side’ of the climate change debate be taught or discussed in this course,”

“Opening up a debate that 98% of climate scientists unequivocally agree to be a non-debate would detract from the central concerns of environment and health addressed in this course,”

Thus, despite the hysteria of the collegians, the UCCS profs' take is fully consistent with the position statement of the American Geophysical Union - the top professional organization for actual climate scientists (as opposed to chemists, economists, engineers,  philosophers, etc.) see e.g.

The 'Fix's' luminaries also published other links showing other schools (e.g. Oregon) not willing to waste time with stupid and useless debates on whether AGW is real. Like typical college "reporters" they believed they were exposing some hitherto unknown nuggets when they were really retreading old ground. In most top schools the alleged "climate debates" were deep-sixed years ago when physics and other  profs realized how much valuable class time was wasted by allowing the inmates to "run the asylum" by specious appeal to climate denier codswallop.

This morning on a local (KOAA-TV) news report that was confirmed by one of the school's physics profs. As he observed, and I agree: "If they want to debate let them find another class to take, and refrain from taking any more science classes."

“The faculty was very direct and straightforward in stating that the bulk of this course is going to be about human-induced climate change, and that’s going to be the primary subject of discussion. No differently than a math professor would say, ‘This class is about algebra; we’re not going to talk about geometry.’”

But in fact that's something of a false analogy, given BOTH algebra and geometry are totally legit math areas while any "science" that embraces  AGW debate or denial is NOT.  Thus, a more apt comparison would be a Numerical Analysis class in which students wish to debate Numerology. The first deals with the use of  numerical approximations (e.g. finite differences)  to obtain solutions to differential equations, for example. The last is specious and based totally on humbug whereby numbers are employed to parse occult meaning  and influences on human life.  It is similar to astrology, in other words, in being replete with codswallop masquerading as real science.

Thus, Hutton actually attempted to soft soap the profs' objection, by insinuating that in another science-related course it would be perfectly fine to debate AGW. NO it would not, since it is no more up for debate than the holocaust or the validity of Newton's Second law of motion.. If certain students wish to debate whether the holocaust actually occurred they need to have their butts kicked out of a World War II history class, and maybe go into pseudo-history or whatever. If they want to debate Newton's 2nd law then they have no place in a college physics class and need to instead enter a course like Derridian deconstruction.

If these UCCS students knew anything, or had managed to look beyond their Facebook pages, and twitter feeds, they'd have learned about Charles Keeling.  Keeling showed, from even his earliest measurements, that there is a continuous, unabated increase of CO2 in the atmosphere. Right now the CO2 concentrations are approaching 420 ppm, but within a rather short time, maybe 40 years - they'll approach 580 ppm and the likely runaway greenhouse limit. From that point on there'll be no turning back, and Earth will be hurled pell-mell into becoming another Venus complete with eventual 450 C temperatures, or hot enough to melt lead.

As Tim Lueker, an oceanographer and carbon cycle researcher from the Scripps Oceanographic Institute CO2 Group, put it 3 years ago in an interview:

"The 400-ppm threshold is a sobering milestone, and should serve as a wake-up call for all of us to support clean-energy technology and reduce emissions of greenhouse gases, before it's too late for our children and grandchildren,"

With the plethora of actual research out there, one wonders why these students aren't able to think critically enough to get to the scientific facts. Well, of course, one symptom of  kool aid drinking and propaganda on the brain is the person DOES feel s/he has arrived at the truth. The problem is that it's in the form of personal beliefs, not actual data. As one female student opined on KOAA this morning,, "The professors can teach what they want, they will not change my beliefs!"

But science isn't  about beliefs, especially climate science. Sadly, the reams of propaganda spewed out by Exxon has turned many young minds into mush and now has them questioning the actual science. All this thanks to the disinformation cranked out  by Koch brothers-backed PR hacks and exposed by the Union of Concerned Scientists. Those who want to access all 340 pages of the 'Climate Deception Dossiers' can go here:

As usual, at the end of the Gazette's brief article, a comments section appeared with the voices of reason essentially drowned out by the know nothing peanut gallery. One of the latter actually insisted the UCCS students' "free speech" rights were being denied, if you can believe it.  But one sensible person who saw this claptrap for what it was delivered the only response possible - and most needed:

"This isn't about freedom of speech. It's about science. Ignoring/debating/ denying the scientific evidence tells me you've swallowed the kool aid served you by the likes of the Koch brothers and others in the oil industry who are trying to protect their interests at the expense of the world's survival. You've been brainwashed!"

Indeed he has been brainwashed.  The problem here is that a propagandized or "brainwashed"  brain is one that has been parasitized, as if hundreds of tapeworm cysts had spawned and displaced -destroyed neurons, e.g.

Thus, the critical thinking centers of the frontal lobes have been ravaged and left as a waste space.  All this brain can do is to recite or parrot the assorted propaganda it has imbibed. As for nuanced thought, it is hopeless - an impossible task.

So no wonder all that it has to fall back on are its pet beliefs.  I am not saying here that the brains of these UCCS students (or Kort Patterson, for that matter) look like the brain shown. I am saying that their limited neural thresholds, diminished ability for nuanced and critical thought  would resemble the dynamics and function of a physically parasitized brain. I.e. one besieged by worm larvae and cysts.  Why then would any proper science prof want to debate such a zombie?

The students, for their part, were correct that the course catalog description was for an online elective humanities class, and that the topic varies by semester. However,  there was no reason to believe the science staff teaching it would tolerate "debates" on warming science, any more than Heinrich Eichhorn - when he taught an analogous humanities astronomy class at USF in the 70s  - would tolerate a debate on "astronomy vs. astrology". It is just plain obtuse to believe so.

The university for its part did confirm that professors teaching the course had sent an email that said some students were concerned about "the class only looking at one side", but failed to note it is an issue with only one side. Just as the holocaust is, and just as astronomy trumps astrology. It is only propaganda that deludes people into believing this issue has 'two sides'.

http://brane-space.blogspot.com/2012/01/our-students-at-risk-of-delusion-on.html
Posted by Copernicus at 2:12 PM