What I Got Wrong About My MRI Fusion Biopsy 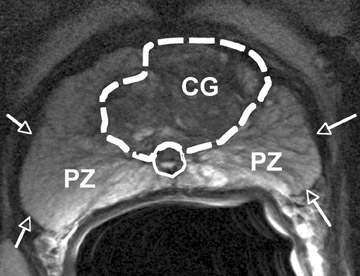 MRI scan (not mine) with possible hot spots, lesions as it would be used in an MRI fusion biopsy.

As I wrote in my post from July 1, after noting the basis for an MRI fusion guided biopsy, e.g.

"This will then limit the needle insertion (and extraction of tissue) to the four suspicious areas noted in the MRI as opposed to "shooting in the dark" with 12 random stabs in the standard needle biopsy. Fortunately, a phone call to the local Urological Associates has determined that they can do it."

Well, I got one part of that right, the other wrong. The part I got wrong was assuming that the needle insertions would be "limited". They were not. In the MRI fusion guided biopsy I had yesterday afternoon no fewer than 19 sticks with the needle were delivered one after the other.

When I was first notified of this after I entered the biopsy room I couldn't believe it. I sputtered: "But I thought because there were only four suspicious areas* the extractions would be limited to four maybe one or two more."  "No" was the answer, "the four suspicious regions only means we now know where to concentrate our focus so can really go in there and take up to 24 samples!"

Fortunately, it ended up being only 19 thanks to several "calcified" areas - most likely from the previous radiation (HDR)  treatment-  that they didn't want to disturb. But still, to prepare for the onslaught, I not only had to take the prescribed 750 mg  Levofloxacin antibiotic tablet but also two stabs of gentamycin in each buttock 20 minutes before the biopsy commenced (this in addition to the lidocaine needle to numb the gland, and hopefully not pass out from the pain.)

I ought to have figured something wouldn't be as I expected when we had to wait over an hour for what was supposed to be a 1:45 p.m. appointment. Then, only after entering the biopsy room did we find out the guy in before me had passed out on the table. They, of course, had to allow sufficient time for him to recover- so then all the appointments that followed were backed up.

As the needle sticks were ongoing, lasting maybe 30 minutes because each tissue extracted from the prostate had to be sample-tubed and labeled, I talked with the doctor performing the sticks about treatment alternatives. He seemed to believe the "ice ball" or cryotherapy was the best for salvage, e.g. the general procedure outlined here:

I told him I was thinking instead of HIFU (high intensity focused ultrasound) which many prostate cancer survivors on various forums said worked for them. (Though they had to obtain the treatment in Mexico or Canada since at the time the FDA hadn't yet approved it here  -only some clinical trials. I have since found out that HIFU-  'Ablatherm'-  received approval since October last year but is still awaiting CPT code assignment. Until then no Medicare payments for any HIFU!)  ). His snarky reply was "I wouldn't do that to my dog".  But remember, this guy is a urologist and in their 1-dimensional universe surgery (radical prostatectomy) is the one and only solution. Never mind in 25 percent of cases cancer is left in the margins and there is biochemical recurrence. Nearly the same percentage have to get salvage therapy, though to be sure making a choice after surgery is easier than after radiation, given the damage to tissues already inflicted by the latter.

I also mentioned not doing anything, and he agreed that could be a valid option, or non-option, especially if it is found the Gleason scores are high (8, 9). Then I just accept 4 to 7 more years of life and go with it, ditching the many side effects of hormone treatment like cardiovascular issues, metabolic syndrome and cognitive decline. As I told him "we all gotta go some time".

Now, I play the waiting game and in the next week or so should receive the results of the histology-pathology analysis of the slides.

I am hoping for the best.

Adopting the PI-RADs MRI imaging scale my original MRI report noted 4 lesions ranging in size from 7 mm to 12 mm (almost a half inch across) with a PI-RADS score of category 4.

According to the Radiopaedia site:

"PI-RADS (Prostate Imaging Reporting and Data System) refers to a structured reporting scheme for evaluating the prostate for prostate cancer. It is designed to be used in a pre-therapy patient.The original PI-RADS score was annotated, revised and published as the second version, PI-RADSv2  by a steering committee with the joint efforts of ACR, ESUR, and AdMeTech Foundation.

The score is assessed on prostate MRI. Images are obtained using a multi-parametric technique including T2 weighted images, a dynamic contrast study (DCE) and DWI. If DCE or DWI are insufficient for interpretation the newest guidelines recommend omitting them in the scoring. (DCE = dynamic contrast enhanced imaging, and DWI = diffusion weighted imaging.)
.
A score is given according to each variable. The scale is based on a score from 1 to 5 (which is given for each lesion), with 1 being most probably benign and 5 being highly suspicious of malignancy:

Posted by Copernicus at 8:06 AM