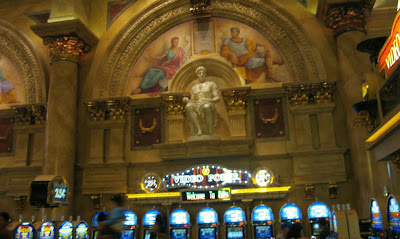 Above: some of the slots at Caesar's Palace. Below: Cashout voucher from Bellagio - a huge factor in slots' players losing their winnings. This is for just 7 cents kept as a souvenir.

Most people,  when you tell them you won 800 bucks playing the slots in Las Vegas then lost it all, will believe you're  inept or nuts. But they have no idea how easy it is to do in the environment of one or more large casinos on the Strip.  Before this past week, I still could not comprehend my now deceased brother John's gambling addiction. Its basis appeared elusive since he had everything he needed and certainly didn't have to gamble and lose, lose, lose.

But on our latest Vegas trip, this past week (coming back last night) I now get it, as does Janice. We ourselves had been enmeshed in the fantasyland of slot machines going off with huge wins and felt, what the hey, if you come to Vegas you have to at least gamble a little, no?

So we alighted at McCarran International Airport  last Sunday evening and made up our minds to set an upper limit of 100 bucks out of the $250 we brought with us (between us) to cover losses. We agreed that once that hundred was gone, there'd be no more slots, nada. And certainly no going to ATMs - where the casino service charge is $6.99 per transaction in addition to bank fees averaging $3.50. No way!

Of course, we set no limits on money won. After all, that was 'free money' to do with what we would, no?

The slots at the Bellagio were among the best, including: 'Flintstones' (Yaba-daba-doo! screeching after each big win), Wheel Of Fortune, Jurassic Park, Forbidden Dragons, 'Texas Tea' and what we called "Chinese Babies". The latter conveying an oriental aura with the Chinese background music and then really erupting with loud sounds, ornaments popping out of the screen - accompanied by baby 'chuckles'. As your totals ring up ever higher - surpassing $30 or so, cash takes the place of the ornaments and pours from the screen to blaring Chinese music with the enormous red letters,  "BIG WIN!" The digital viewer at bottom continues rolling to ever higher 'credits' - measured 100 at a time, escalating into the thousands - as you can't believe your luck.

Overall, I'd won something like $180 between 'Chinese Babies', 'Forbidden Dragons', 'Texas Tea'. Janice won $108 at one slot ('Wonder Woman') just after we arrived at Caesar's to go to Gordon Ramsey's Pub & Grill. A little later I took in another $40 with a different 'Dragons' game. The next night Janice really poured it on with $407 in wins at assorted machines, including 'Buffalo', 'Flintstones', 'Jurassic Park' and 'Wonder Woman'.

What happened?  Well, mental errors - very likely when one is caught up in the immediate euphoria of a huge win - and failing to cash out the paper ticket voucher.  Let's take the last first. The paper ticket vouchers are used to minimize cash transactions, lessen the risk of theft, loss etc. You get a paper ticket after each win - or you can take a 'cash out' to bail out of the game before ending up with $0. While the tickets are an efficient way to use the machines, they can also make you less conscious that you are dealing with real money. (As opposed to if you actually had say received twenty $20 bills and seven  $1s.)

So Janice, instead of getting her actual cash payout,  simply used her entire $407 ticket in a different machine. And this is where the mental error enters, because you see there are many kinds of slots, the penny (1c) ones, the five cent, the 25 cent, the dollar, the $3, the five dollar and the ten dollar. There are also differing bets that can be placed on each, For example, a 20 x bet on a $5 machine actually puts you at risk for a $100 loss if your spin goes nowhere.

In Janice's case, she didn't pay attention that the next machine she went to was a $3  machine, not a 1 cent slot as she'd been playing. She just thrust her $407 ticket into the ticket slot and pressed a 50 x per spin bet, believing she had a 50 cent spin. In fact, it was 50 x $3 or 150 bucks gone in one pop. She then realized her huge error, cashed out the $257 ticket balance and went to the 1c slots, where she finally ended up losing $210 total - i.e. of the $407. The realization then dawned of how much she'd lost - equal to a whole week's pay for many - so she decided to pack up and leave to play another day.

All in all, counting the money we had left plus what we put into the machines,-  and the wins - we figured we ended up roughly $50 in the hole.  Yes, that means we lost $850. But heck, you come to Vegas to play the games not win a bunch, cash out each time,  then go back to your room to read and save the money to take back home!  The point is that the money won allows the continued play!

We had a great time, probably gambling a lot more than we would have, i.e. had we not had several winning streaks at different times. It was precisely the money won which enabled us to keep playing the slots and having fun.

One more thing that became apparent was the analogy with stocks. The paper ticket voucher then is analogous to the paper money displayed on your stock statement. But....it isn't real money until it is cashed out, redeemed. In the same way, holding a $407 paper voucher ticket was nice for Janice, but she now realizes she'd have been better off redeeming it and playing the total cash in increments, say $5 at a time in the penny slots.
Posted by Copernicus at 9:02 AM