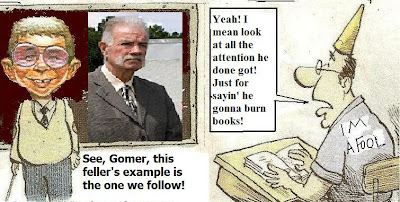 Generally, I have tried to keep a straight face as well as ignore most of the fulminations of the Reeptard, lunatic Right over Colin Kaepernick's refusal to stand for the national anthem. The way these Right loonies and hate mongers are going at it, you'd think Kaepernick had committed a federal crime, as opposed to merely exercising his first amendment rights - as I noted in my previous post on the issue, see e.g.
http://brane-space.blogspot.com/2016/09/the-kaepernick-kerfuffle-why-all-fuss.html

But as the Right has now adopted the Kaepernick flag issue as a hate totem, more scrutiny is needed to slap down this cockamamey BS for the hate- inciting bollocks it is. Perhaps the most pernicious aspect has been the pseudo-calling out of "libtards" as "hypocrites" because we defend Kaepernick's 1st amendment rights but didn't do so for pseudo-pastor Terry Jones when that asshole was burning Korans on youtube.

But the two cases are as different as chalk and cheese. The one, sitting for a national anthem, is simply the rejection of a national symbol in the exercise of free expression (which despite some of their bombast, many Right bloggers agreed years ago that burning a flag was allowed speech. How short memories are!) But the fact is that burning a sacred religious book is not the same, but bare faced hate and incitement to violence.  That the Right's paranoiacs (who are obsessed with posting every pose of  Kaepernick's as sending some kid of "message") can't see that, is beyond belief.  But then, when we recognize this same lot as resolute Trumpies it all falls into place. Who else can rival Trump as the main voice of hate in the country now, even as he fake poses with African -Americans (e.g. in Detroit) to try to get them to enter his plantation.

Anyway, six years ago  then Secretary of Defense Robert Gates, Gen David Petraeus, and the Vatican and Pope, among others – all pleaded with Jones to stand down and back away from his hateful act.  By contrast, Prof. James McWhorter observed this morning ('AM Joy') that Kaepernick "is trying to make a very important statement and I am glad he's doing it".  Adding, "what was he supposed to do, send out tweets?"  Implying the latter would have been a wasted action, garnering no attention.

Indeed, Kaepernick has chosen a national platform and stage to make his point, but the Right - always looking for grievances -  have again turned a speech issue into 'World War Three' in their blogs and radio talk shows.   All this is even more pathetic, as well as amazing, when - as Joy Reid pointed out - this song for which Kaepernick refuses to stand wasn't even adopted as our national anthem until 1931.  So why are the Right's little victims getting their panties into such a twist? Well, because they can exploit it as a vehicle for Islamophobia to help their boy Trump, or so they believe.

Prof. McWhorter probably hit the nail on the head  by observing that many whites - especially on the Right-  would have taken Kaepernick's actions as "scolding his country".  Hence believed him uppity for doing so. But as McWhorter put it: "If you love your country of course you are going to scold it sometimes."

"As for the Star Spangled Banner, I don't care what anyone says, most people have not liked that song very much. It's difficult to sing and in a style that's frankly outdated  And all of a sudden it becomes this totem of being a moral American human being. when one poor man makes a statement about the most important racial issue of our time."

And as Joy Reid noted, "it was written after the War of 1812 and has nothing to do with the founding of the country"

But see, for Trumpies, black people are supposed to be only seen (even barely then) and not heard, and take their cop beatings quietly. NO slurs, no acting out and no talking back!  "And they better damned well stand at attention and sing along- but hey, we can burn their Korans and call it free speech"!

But leaving out all the distracting  BS, the core reason for jumping on Kaepernick's case is because he is the mixed race adopted child of two white parents. So his free speech actions now provide the haters a platform for thinly disguised racial invective and stirring up anti-Islamic nonsense. Let's note, for example, that Right wing hate radio and media have been responsible for spreading the rumor of Kaepernick's "conversion to Islam" (even if true, so what?) and based it more or less on the quarterback’s personal life. Thus, the architects of the “Kaepernick is a Muslim” narrative attributed his conversion to his romantic relationship with Hot 97’s Nessa Diab – a Muslim American from the SF Bay Area.

To bolster their conspiracy theory they have then posted all kinds of Kaepernick kneel down poses as "proof":  "See that! He's a raghead! I told ya so! And those damned libtards won't admit it!"

No we won't because it's a bunch of stupid, fucking nonsense and only meant to stir up rage and anti-Muslim hate even as we approach the 15th anniversary of 9/11.

If the Reeptards want to soak in their noxious tub of slime so be it,  but decent folk need to call them on it and expose their hate mongering for what it is. That includes stripping away all the patriotic window dressing exploited to distract from the hate beneath.  As Samuel Johnson once put it:

"Patriotism is the last refuge of the scoundrel".

But make no mistake, the Right will have no problem using it to further conceal their true motives in their unhinged fulminations and conspiracy theories against Colin Kaepernick.

"My initial reaction to quarterback Colin Kaepernick’s decision to sit during the playing of the national anthem before San Francisco 49ers’ games was irritation, even a little disgust. But, after hearing him talk about it, I’ve moved 180 degrees, and I now support him 100 percent. I don’t believe Kaepernick is unpatriotic or in any way intends to disrespect anyone. What he intends to do is draw attention to America’s insufficient efforts to live up to its own ideals. He is using his celebrity to ask us to examine how we practice our values in the way we view and treat African-Americans."

Posted by Copernicus at 8:34 AM