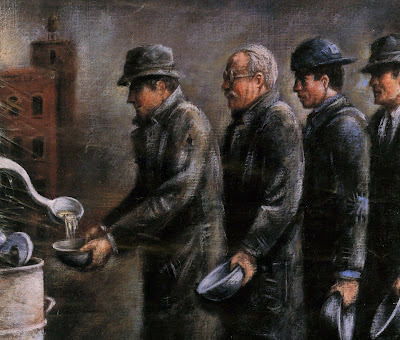 There are roughly 72,800 citizens who stand to lose unemployment benefits in Colorado, including 17,900 by tomorrow - many with kids who will now have to go to bed with hungry bellies. Across the nation, 1.3 million will lose those benefits by tomorrow - with at least 230,000 children affected as well. You can thank a Repuke -controlled congress which drove a draconian "bipartisan" budget deal  earlier this month that left $23 b untouched for the over-stuffed defense industry-Pentagon to go ahead with the building of 2,335 F-35 bombers at a cost of 3/4 billion each .

Paul Ryan,  GOOp doyen who shepherded this despicable deal, admitted in a CBS news clip on December 12 his "concern" about military spending cuts in the sequester so was "pleased" that $63 b of defense sequester cuts were "offset" by $85b in "automatic spending cuts". Unmentioned is that unemployment extension was off the table, as were any new tax increases - which would have helped limit the deficits by nearly $150b within two years.

Of course, Ryan- who professes to be a devout Catholic - obviously doesn't give two craps about  all the hungry kids to be affected, as well as those that had their SNAP benefits cut. (Yes, cut! Never mind it was part of a stimulus package. If fuckin' Reeps can refer to tax cuts being ended as "tax increases" I will sure as hell refer to ending stimulus for SNAP as cutting SNAP!)

The very notion of cutting unemployment benefits at 26 weeks in this economy is absolutely nuts - not to mention cutting them off for the "chronically unemployed" (those unemployed longer than 6 months). What it shows is that either: a) the Repukes in the Tea Party led house don't care about their fellow citizens, or b) they have no grasp of our current economic situation.

For one thing, they don't grasp that there are currently 2.9 job seekers for every available job. (Denver Post, Dec. 26, p. 20A).  This also discloses that the stock market - which has spiked 24% this year- is all based on a fool's  fantasy and no real foundation. As The Post observes: "The 2.9 to 1 ratio compares to a 1:1 ratio in a robust market".

We got a first inkling of (1) being low with the just released news (last night)  that Xmas spending was up only 2.3% this year compared to 3.9% last year. Retailers are so desperate now many plan 75% cuts on merchandise leading up to New Year's. Of course, this translates to loss. The stock market meanwhile is flying high. Why? Mainly because of two elements - Bernanke's quantitative easing which he soon plans to end and companies buying back stock to create artificial bumps in share prices.

The below expectation sales numbers indicate consumer demand is  still low meaning the existing wages remain too low to support spending without going into debt.  If Neoliberal hoity toities piss on the fast food workers and service industry for  wanting a "living wage"  ($15/ hr) - as opposed to settling for $7.25/hr then they can't bellyache about low spending! They must accept that consumers are buying less, or resorting to unusual savings ploys (e.g. waiting until after Xmas to buy - to get huge discounts)  because this is the best they can do when low wages won't support more.

Now, add to that the long term unemployed who will be denied benefits from tomorrow and you have a nightmare - even lower spending. Bank of the West chief economist Scott Anderson, quoted in the Post (ibid.) "predicts a wider economic hit that could drag down next year's GDP by 0.2- 0.4 percent if federal benefits are not extended."

The backstory to the predicament of the long term unemployed and those who've lost food stamp benefits is even uglier and especially in the nation's suburbs.  There are 3 million more impoverished in our burbs than in our big cities ('Poverty Comes to Wisteria Lane', UTNE Reader, Jan-Feb 2014, p. 61).  People are having to turn to public assistance or private, in droves, and are often left empty handed. The article notes that services are stretched to capacity and demand has overwhelmed resources. Much of this arises from lower donations, and a Brookings Institution report  cites 1 in 5 nonprofits having reduced services since the start of the recession.

With government now having cut its support too, people are hurting....in a very bad way. To quote the article (ibid.):

"You have families burning pallets in their homes for heat, water that has been turned off, cupboards that are bare."


Where are the Republicans' hearts in all this? Do they have any? Do they care that tens of thousands of kids will only have empty fridges and cupboards to look forward to from tomorrow because their parents are without money? How is it the Teapee -led Reeps couldn't find it in their Scrooge hearts to cut the military bounty as opposed to leaving families destitute and hungry?

Even ordinary Republican voters can't believe this perfidy. As reported in the Post piece (ibid.): "A Public Policy Polling poll released Monday found that more than 60 percent of voters in Mike Coffman's Aurora district favor extending the unemployment benefits. At the same time, Coffman is considered one of the most vulnerable Republicans facing re-election in the House."

Are you kidding me? WHY? You bozos have no trouble launching wars without figuring out how to pay for them, or insisting on tax cuts without paying for them? The way to have paid for them was to have rigorously offset domestic cuts with military in the recent budget deal. That is, balancing the $85b in automatic domestic cuts with $85 b military cuts - as opposed to easing the militarists' burden  by $23b!  But oh no, the Tea-pees would have none of that - hence the decision to leave unemployment benefits off the table.

Evidently, the extension opponents - according to the Post -  argue that the "extraordinary assistance" needs to end at some point and that it can deter people from taking the opportunities available."

So there, in a nutshell, we have these rats'  basis for Scrooging over a million unemployed Americans and their kids. Their very notion of "extraordinary assistance"  is nuts, given it can't possibly be "extraordinary" if there is only one job for every 2.9 job seekers.

"Deter people from taking the opportunities available?" Don't make me laugh! The "opportunities" don't exist in the ratio needed for practical attainment.

Once again, I'm reminded that those who are so sanctimonious and lord it over those in need, have never been in need themselves. It's so easy to feel superior and more moral when you aren't the one who has to burn pallets for heat, or have to face three or four kids crying at night because of hunger.

I just hope the Tea Party Goops are happy with themselves and what they've done, and I also hope - for their sake - they aren't faced with the same predicament so many of their brothers and sisters are in this holiday season.
Posted by Copernicus at 8:33 AM