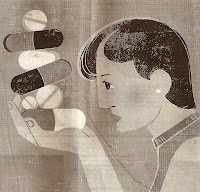 The new report released that discloses a major uptick in liver damage incidence arising from weight loss, energy and other supplements ought to get everyone's attention (New York Times, 'Spike in Harm to Liver Is Linked to Dietary Aids', Dec. 22, p.1).  The problem is many may not distinguish "supplements" from dietary supplements" and believe the latter are implicated too.

But according to the piece (ibid.):

"More popular supplements like vitamins, minerals, probiotics and fish oil are not linked to patterns of adverse effects".

This according to Duffay MacKay of the Council for Responsible Nutrition. The actual culprits are in the realm of "weight loss" powders, pills etc. as well as those claimed to be for muscle building. (The latter often spiked with unlisted steroids, etc.). Also alleged "fat burning" products like OxyElite Pro "that was linked to one death and dozens of cases of hepatitis).

The risk to livers arises as "half of Americans use dietary supplements and most take more than one product at a time". The next step for many? Severe liver damage which may be so severe one must either restrict activities radically, or await a liver transfer because the organ ceases to function entirely.

According to the piece, the FDA estimates that 70 companies are not following quality control standards so many Americans have no idea what they're putting into their bodies. Further, of about 55,000 such supplements sold in the U.S. only about 170 (0.3 %) have been studied enough to determine side effects. What we do know is that when the National Institutes of Health began tracking liver injuries in 2004, dietary supplements accounted for 7 percent of the 115 severe cases.  But that has increased to 20 percent of over 300 cases last year.

The list included dozens of men sickened by taking body building supplements, with all the patients fitting a similar profile. According to one investigator (ibid.):

"They become very jaundiced for long periods of time. They itch really badly, to the point they can't sleep. They lose weight."

Is it worth it to take this crap? I don't think so. Risking your liver when liver transplants are not exactly any easier than kidney transplants is not a smart move. If you want muscles that badly....well, buy a muscle suit. If you want to lose weight....EXERCISE more, eat less. If that doesn't work, you need more help than a dietary fix can provide!
Posted by Copernicus at 5:57 AM

Most of the people are not aware of the vitamins and dietary supplements are they taking. We learn many things that vitamins and supplements can protect our immune system and make the body become stronger.