Atheists Need to Back Off In Their 'War on Christmas' 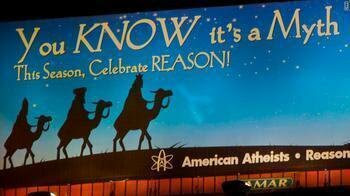 One of the early cards designed by American Atheists to help promote the meme that Christmas is a myth.


As we approach another Christmas holiday, and word has gone out that American Atheists has put up a forty foot billboard in New York to advance the 'war on Christmas', the outside observer can't help but note how this plays right into the Right wingnuts' hands: "Looka there! Ya see! The liberals and atheists are all together in this waging a war on Christmas!"

Of course, this is bollocks but many may not see it that way. And as atheists are still seen as the 'bad guys' in the country (polls show only a minority would vote for one as President) they can ill afford to be further smeared. The way out is to find allies, preferably progressives, who will unite with atheists for a defined common good. Maybe that is fighting for a better health care system, or decent living wages, or even Elizabeth Warren's latest campaign to have employers back off doing credit checks on prospective employees.  The point is atheists risk being marginalized unless they link up to larger social causes besides waging a myopic  "war on Christmas". It makes them look detached from the larger society and foolish.

The historical reasons for why atheists have waged this war are well known, at least among atheists and most freethinkers. Ancient Rome had essentially made its peace with the indigenous Christians - thanks to the Emperor Constantine (274 - 337). Recall that Constantine was the de facto head of the Sol Invictus cult for which December 25th was celebrated as "the Birthday of the Unconquered Sun".

In reality, this referred to the Winter Solstice, or that date in the year when the Sun was at its maximum declination below the celestial equator (now calculated to be at -23.5 degrees). At the same time, it was the date at which the Sun would begin its journey back north along the ecliptic to meet the celestial equator by the time of the Vernal (Spring) equinox. This northward march meant geometrically longer diurnal circles, hence the winter solstice marked the astronomical date when days began getting longer - hence a solar "re-birth" in a manner of speaking.

By selecting December 25th (the date of the ancient winter solstice)  as the nativity of Christ, the Church repaid Constantine for his generosity (via the "Edict of Milan" issued in 313, which not only permitted Christians the freedom of religious worship and their religion's recognition by the State, but also reparations for previous losses, such as having property confiscated). In other words, the choice sealed a continued basis for accommodation and cooperation between Rome and Christianity and also empowered the latter - providing the impetus to become the religion of the then civilized world.


Less well known, is that the ancient religion of Mithraism was also well-entrenched in Rome by the time of the Christian choice of December 25th, and indeed, they (Mithraists) also celebrated that date as the nativity of the Lord Mithra. (See, e.g. the book, Pagan Christs. )   In this respect, the American Atheists are quite correct and December 25th does not exist as any uniquely holy date, hence for all intents is a myth. In this sense, "myth" means: an unproved collective belief that's used to justify a social institution. If one therefore is going to celebrate a nativity - he should (for history's sake) go the whole hog and celebrate it not only for Yeshua, but the Lord Mithra, as well as the Roman god, Sol Invictus. They all share that date, and all are entitled to acknowledgement.

For many atheists, the issue is elementary: they simply acknowledge the date as that coinciding with the ancient Winter Solstice and mark it purely as an astronomical event. Yet socially we may well celebrate with family and friends and even exchange gifts, but this is part of a recognized habit or custom. Hence, when atheists declare "Christmas is a myth"  they're charging wholesale into an established religious -commercial quagmire where they're not only seen as attacking religious beliefs, but customs too. It's a no win game.

Atheists by doing this also reinforce the belief that they are always against things and never stand for a positive value.  In his brilliant article Atheism Wars[1], the eminent economist John Gray, author of False Dawn- The Delusions of Global Capitalism,   argues:


Contemporary unbelief is a hollowed –out version of monotheism- a cult of human deliverance lacking the beauty and flashes of wisdom of traditional faiths. Defined properly, it is an entirely negative position. An atheist is anyone who has no use for the concepts and doctrines of theism

This is an honest take, and is also perhaps why Gray declares himself an atheist in the proper meaning of the term, as I do. That is, one who simply withholds belief. I provided the original definition, of what later came to be known as implicit atheism, in a Mensa Bulletin letter. That definition read[2]:


Let's be clear about what constitutes Atheism and what doesn't. The Atheist - to put it succinctly, absolutely withholds investing intellectual/emotional resources in any supernatural claim. Indeed the word Atheism itself embodies this definition”


What is happening here is not active disbelief, i.e. making a statement 'There is no god', but rather simply passively withholding belief/acceptance in a statement already made.  Hence, the deity believer has made the positive claim. The ontological atheist’s is the absence of belief in it. No more - no less.

Reading John Gray’s excellent essay showed me that my position is genuinely more implicit atheism, or what George Smith described as agnostic atheism, than the more hard-edged variety of Ayn Rand, or Madalyn Murray-O’Hair. In Smith’s words:


This more open or implicit basis also backs the atheist away from a hard-edge, intolerant stance. It also opens the way for positive cooperation with others of a liberal mindset.  As I  noted in my first atheist book, The Atheist's Handbook to Modern Materialism,  this paved the way for positive alliances for advance of social justice, such s Paul Kurtz defined in his (2000) 'Humanist Manifesto'.


Hard-edged,  take no prisoners atheism is also a loser philosophically, as I have noted in my new book, Beyond Atheism, Beyond God. Therein I noted the "Camus conundrum"
discussed by Greg M. Epstein ( Good Without God, p62) to do with Albert Camus’ novel, The Plague.  The essence is embodied in a question Camus’ character Jean Tarrou asks his friend, Rieux:

Why do you show such devotion considering you don’t believe in God?

Epstein puts this in a contemporary setting, referencing a 2006 book tour by Richard Dawkins for his God Delusion. According to Epstein,  Dawkins was somewhat startled when a young man approached him and asked directly: "Dr. Dawkins, I am thinking of committing suicide, what do you have to say?

Epstein relates that initially Dawkins was so nonplussed he could think of nothing to say,  then suggested the young man (a student at Harvard) could go to the humanist chaplain or – if he’d been at , he could go to the Anglican chaplain.  In understandable astonishment, Epstein observed (ibid.):


"Is that the best we can do? Rage, rage against the dying of the Enlightenment then shoo our troubled youth back to religion because we’re too distracted or cerebral or both to spend a few minutes of our deep thoughts on being more loving and more helpful?"

Let’s be clear the Camus conundrum highlighted in modern form by Epstein isn’t just a problem for Dawkins.  I am certain that in a similar situation, all the current hard core crop of atheists (including those waging wars on Christmas) would be at a loss for words. Overly obsessed with combat against the "believers"  and their myths they'd have lost sight of the human dimensions.


In regard to the "war against Christmas" we need to bring those dimensions into focus as well, and whether we are familiar with the historical basis for Christmas or not, understand that by trying to extinguish it  we are exercising a futility similar to Dawkins in his response to the Harvard student. The atheist meme and philosophical foundation survives,  not by making more enemies or alienating more people, but by finding common cause with others to ennoble the human condition and not degrade it.

Posted by Copernicus at 8:45 AM

Hello meen, I've been following your blog for almost 6 months now without leaving any comment so I decided to quickly say hi today, just so you know you've got a fan somewhere. LOL. Your blog makes sense to me just like http://danieluyi.com, another similarly interesting blog that I'm also a fan of.

Thanks, Daniel! And happy to have you on board! I hope you will enjoy much more of the blog in the months to come!