The SOPA-PIPA Battle is Far From Over! 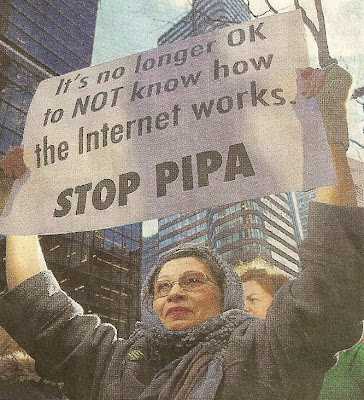 It seems many millions of netizens, in the wake of the backlash against the ignominous laws known as "SOPA" and PIPA" on Wednesday, with over a dozen Senators backing down on further votes for PIPA, are now convinced the battle is won and we can all go home and relax! Far from it!

As a matter of fact, key DEMOCRATIC backers of PIPA, e.g. Sens. Charles Schumer and Kristen Gillebrand (NY), and Patrick Leahy of VT, still haven't withdrawn support, as indeed many other demos have not. It appears they are extremely wary of foregoing campaign cash from Hollywood's entertainment moguls, or the big cable tv companies. In fact, on Thursday night's 'Countdown' with Keith Olbermann, Markos Moulitsos of the blog Daily Kos :

Noted that many dems either cowardly voted "present" - a true copout if ever there was one, or avoided the vote entirely. As he put it: "I have never been so ashamed of the Democratic Party". Well, truth be told, I was more ashamed when these political weasels allowed the worst provisions of the Patriot Act to be extended two years ago. That was the low point for me, but truthfully I'm no longer terribly surprised at what any politician does. They are all bought out by some interest or other and remain supplicants to those interests for their electoral success. For more evidence, look no further than how former Dem Sen. Chris Dodd (CT) has since become president of the MPAA, and is one of those planning to "tweak" the PIPA law. Something rotten in Denmark, anyone? No wonder so many citizens are disgusted and cynical about American politics (apart from the fact MPAA lobbyist hacks wrote the PIPA law!)

The point now is that Hollywood and its sphere of special interest influence is not finished, not by a long shot, and is currently readying itself for another attempt at pushing at least one of these abominable laws through. According to the article 'Hollywood Loses SOPA Story' (WSJ, January 19, p. B1, B2) these special interests determined to protect "their property"(as if they aren't already stealing from citizens what with their outrageous movie ticket prices and DVD prices) are gearing up for a major PR campaign.

You see, they are firmly convinced the average netizen is simply too obtuse or maybe unread to understand or grasp their points. According to the WSJ piece (p. B2):

"The MPAA (Motion Picture Association of America) is in discussions with studio chiefs and Hollywood unions to launch an advertising campaign to counteract 'misconceptions' about the legislation, according to a person familiar with the matter."

The piece then goes on to note that a campaign was launched Wednesday by Creative America - "an advocacy group that represents unions and other entertainment industry organizations". Evidently this lot's priority is "to make Hollywood's plight something average people can relate to."

It will boil down to: "Fight a Pirate! Save American jobs!"

But once again, we have no qualms about "fighting pirates" -whether Chinese, Vietnamese, Cambodians, Russians or anyone else who attempts to illegally copy Hollywood films or whatnot and sell these goods. And certainly we want to "save American jobs" - who wouldn't? (Though it's interesting that many of these studios film their fare in Vancouver, Toronto and other "cheap" foreign places to avoid paying Americans!) That is not the core issue!

The core issue is and remains the laws' unintended consequences, including shutting down websites or blogs using court orders, if they happen to include "copyrighted content" but make no money from it. Or, use the law to enable TV manufacturers, satellite tv companies or others to build technical gizmos into DVRs, DVD recorders or whatever to prevent, say football fans, from making dvds of their fave teams' games - as occurs now. Or even making movies for their own use. (Recall this same battle was fought when VCRs arrived, and the movie industry eventually backed down, realizing it wasn't worth it to fight citizens who wished to copy movies for their own uses, televised on their own TVs.)

So, until these unintended consequences are addressed in a serious way, and by that I mean all legal sanctions for innocent use of material expunged, this battle will continue. As one Colorado university student put it yesterday in the Denver Post: "The problem is that this is a law that can't work. We - this generation - grew up with the ability to download everything."

So, like the music CD companies who fought pitched battles against Napster and other sources and ended up eventually losing (check how many music CD companies still operate), so also will Hollywood if it gets too greedy concerning its "property" rights here.

For the rest of us, it is well to keep a watchful eye, and be prepared to take to our net pitchforks and torches if either of these laws surfaces again in similar form. Meanwhile, we need to let our Democratic reps know we are onto them, and they damned well better shape up if they want our continued support!
Posted by Copernicus at 8:45 AM