The Repukes and Food Stamps: Blame the Victims as Usual! 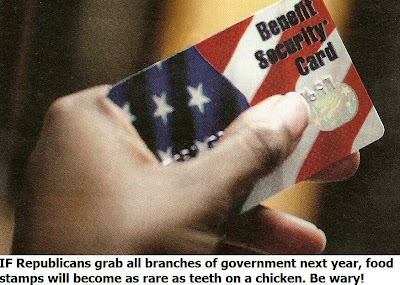 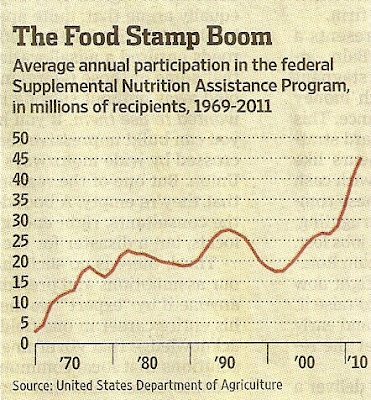 Before a critical election, such as this year, it is always well for the citizen to carefully parse language of the assorted candidates to determine the zeitgeist at work, and what one might expect to see if any of them are elected. A shot over the bow of all those now receiving food stamps was delivered by Newt Gingrich in Monday night's South Carolina primary debate. In that venue, Newtie declared (WSJ editorial, 'Food Stamp Nation', today):

"More people have been put on food stamps under Barack Obama than any other President in history."

Again, pay heed to the language of framing which is used over and over by PR meisters to attempt to subtly push percipients, readers toward the image they wish to confect, as opposed to the one grounded in reality. Newt's choice of language here "people were PUT ON food stamps" as opposed to the reality that people filed for food stamps, in order to feed their families.

No one - no American, "likes to" file for food stamps, but since the Bushie Repukes send the whole U.S. economy into the crapper ca. 2007-08 with their push for minimum wage jobs only (and keeping the minimum wage as low as possible), sending 7 million other jobs overseas to China and India, and de-regulation of banks - allowing them to sell crap subprime mortgages to people who couldn't afford them, not to mention wreaking havoc with their tax cuts and wars of choice, middle class families have had no choice. The Bushie combo of massive tax cuts for the wealthiest combined with setting off a speculative bubble that burst in 2008 - with more than 30 million middle class folks losing up to 40% of their 401ks, engendered the need for families to seek food stamp relief out of pure desperation.

That this R-asshole now holds Obama responsible ("the food stamp president"), as if "putting people on food stamps" was his objective, makes a mockery of any intellectual pretensions he has that would qualfy him for the highest office. In fact, Obama saved those millions of hungry kids in millions of middle and working class families who otherwise would have been starving now. Without, for example, pushing to make food stamps an integral part of his 2009 stimulus package, more than 30 million American kids would be going to bed hungry every night or begging for food on the streets.

Well, at least the WSJ editorial is honest enough to note that "the President himself didn't literally enroll people in the program" which was Gingrich's "crazy" claim (as WH spokesman Jay Carney correctly put it). However, in the next line the WSJ meatheads disclose their own agenda when they opine: "But any other way you cut the numbers Mr. Gingrich was right".

How so, morons? Because Mr. Obama enabled the desperately needed RELIEF for suffering families with kids from a situation you jackasses created by sending this economy to perdition in 2008 with your speculative housing bubble, and peddling the most toxic derivatives (credit default swaps) in financial history to ordinary people all over the world? Derivatives which totalled over $55 trillion and which by many estimates still contaminate our financial system? (One reason major banks on two continents have been very leery of lending, or borrowing.)

But see, this is how degenerate PR pushers work. In this case, they try to link the current record food stamp numbers ("44.7 million people participated in the Supplemental Nutrition Assistance Program in fiscal 2011 at a $75.3 billion cost to taxpayers up from 28.2 million and $37.6 billion in 2008") with current Obama policies. In fact, this is a blatant example of the logical fallacy known as "post hoc ergo propter hoc" or in plain English, "after this, therefore because of this". In other words, because this mass of food stamp dependents occurred after Obama's election, the WSJ and Gingrich want to establish a cause-effect relation based on the presumptive cause (Obama's policies) incepting the observed effect - 44.7 million now on food stamps.

But in fact, what happened is that the collapse of the housing markets - thanks to the Bushies' widespread use of credit default swaps, and a speculative bubble triggered by their tax cuts in conjunction with Fed low interest rates, set the stage for the financial collapse of 2008 in which over 13 million lost jobs - which of course, helped them pay for food. By the WSJ's and Gingrich's reckoning, therefore, most of these people receiving food stamps don't need them.....if they only had the moxie to look for decent jobs (which, of course, don't exist, see: http://brane-space.blogspot.com/2012/01/accurate-portrayal-of-coming-austerity.html

Hence, they not only blame the victims of the Repukes' financial excesses and crimes, but also hold Obama responsible for helping the victims! What we see from this, is that if these guys are ever in total control of government again, food stamp recipients can expect to see massive cuts in those benefits .....oh, probably under some deficit correction banner!

The WSJ editorial for its part states (ibid.):

"Food stamps were intended to help the truly needy so children wouldn't go without nourishment, but Washington is slowly turning it into another entitlement for millions of Americans"

Written, spoken like true miscreants who've never had kids crying for more food every night, as they go to bed hungry. No, those kids and their parents were merely "grubbing" for benefits or "entitlements" that ought to have redounded to the more "needy". Never mind they were put in that financial position by the repuke policies that the WSJ and Gingrich endorse and which they'd love to continue if they can grab all the levers of power again. Or let me put that a different way: if American voters are comatose or dumb enough to allow it!

Oh, and if and when the GOP does make that grab, or they steal the election or voters are too uncaring, forget about ANY "entitlements"....and any food for starving kids! Gingrich, Romney and that lot will simply say: "Let them eat ...garbage.....from dumpsters!"
Posted by Copernicus at 10:45 AM