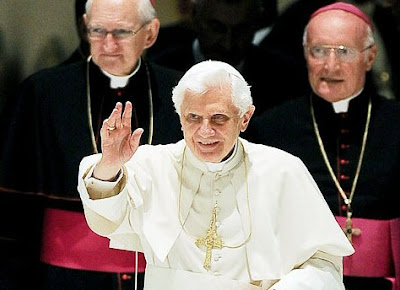 Pope Benedict XV appears to be on the moral warpath once more, which is surprising given that his handling of the priest pedophile crisis essentially provided cover for some of the worst reprobates since the Borgias. Anyway, in a message for World Peace Day on January 1, Pope Benedict said that "neither peace nor justice was obtainable if the objective norms of morality expressed in the Ten Commandments continue to be rejected."

He words represented yet another severe criticism of moral relativism, "the humanistic creed that holds there can be no objective standard on which to base morality". In his New Year's Day message, the Pontiff warned all societies on the planet that justice and peace will remain "words without content" unless they are informed instead by the natural moral law, the key precepts of which are expressed in the Ten Commandments.

All of this bears close scrutiny. Let's leave out for the time being the fact that Benedict assisted- via the 'hide 'em in the paperwork' gambit - assorted parishes in the U.S. as they ferried pedophile priests from place to place (parish to parish, Diocese to Diocese) and essentially sheltering them from formal legal sanctions. Which obviously interjects the question of whether he is qualified to even pronounce on moral laws, far less "moral relativism". He was also responsible for instigating aggressive legal tactics against many of the accusers, causing many to back down- and saving the Church face. He also has instigated the rush to "sainthood" for another coverup artist, the late Pope John Paul II - who, like his successor- often railed against "relativism" and extolled natural law philosophy.

Let's dispense with the Pope's appeals to "natural moral law" or "natural law" first. This is basically an antiquated relic of Catholic teaching that never seems to go away. The central problem is that it's inherently contradictory and inchoate. For example, 200 years ago invocations of "natural law" enabled the Church's moral architects to justify slavery since: "some men needed others to guide and direct them" (see e.g., Julian Pleasants in Contraception & Holiness: The Catholic Predicament, 1964, p. 88).

Later, the Church - eyeing assorted sexual acts- used natural law to declare artificial contraception equivalent to "mutual masturbation" and hence meriting eternal "hellfire." Never mind that they basicially placed one such act (engaged in by two loving people) — in terms of its ultimate sanction — on the same level as the vile acts of a mass murdering cannibal-rapist like Jeffrey Dahmer. Of course, this renders the whole moral foundation inchoate and absurd. You simply can't weigh the vicious acts of a Jeffrey Dahmer and a loving couple using contraception on the same scales of eternal justice, no matter how brainwashed or stupid you are.

Let's also bear in mind that even as the late Pope John Paul II condemned artificial birth control, he also insisted that artificial heart transplants were "natural and acceptable". Of course, this then blows all uniform concepts of natural law into a cocked hat. Surely then, if death is the natural end for someone with severe heart disease, then replacing his natural heart with an artificial one is "frustrating the natural outcome" - which is the same argument he used to condemn artificial contraception (i.e. it "frustrates the natural outcome of the sexual act which is reproduction").

Except that in nearly 22 of 1000 cases nature herself spontaneously aborts fetuses. Did he then hold Mother Nature herself responsible for "unnatural acts" and "crimes against humanity" ? Of course not.

Thus, natural law is an archaic artifact governed by a rigid Aristotelian logic, which tends to fix human behaviors within limited definitions and categories. Indeed at one time the Church issued several "magisteria" (later withdrawn) that the "natural place for women" was in the home, and having babies, tending to them and housework etc. (Ibid.)

Now, let's look at the Pope's "Ten Commandments" as the putative basis for any binding moral law. For example, the biblical literalist may insist the 5th commandment: 'Thou shalt not kill" is absolute. But clearly in practice this is impossible.

Accepted violation (1): An intruder enters a home with a weapon and is about to threaten or kill one's wife and children. The home owner, however, has his .44 Magnum nearby the bedstand. Under any absolutist dictum there is no way any killing can be permitted. The most the homeowner is allowed is maybe to shoot the intruder in the knee and phone the cops. But how many will actually do this? I warrant not one in a million. If they have a weapon they will shoot to kill. (Here in Colo. we have the 'Make my day' law, so you can shoot anyone entering your premises and ask questions later. It's already resulted in a number of pardons, jury acquittals)

Further, the LAW in most states allows lethal force in such circumstances and few religions would protest.

Accepted violation (2): An invading country crosses its neighbor's border and begins raping, plundering and klling its neighbor’s citizens. The invaded nation has every right to fight back and kill in turn. Or, as in the case of World War (II), multiple nations in one alliance are entitled to stop the Hitlerian-Nazi threat of world domination, by invading and bombing (killing) in the German homeland.

No Christians I know - even hardcore bible punchers- dispute these exceptions (though some try to resort to disjunctive euphemisms and speciously discriminating 'thou shalt not kill' from 'thou shalt not murder' - but I refuse to engage in such word games). The point is that once one acknowledges the existence of exceptions, then there is no absolute moral law. Interpetation or exception, or exceptions derivative of interpretation are mutually exclusive with absolutism. Absolutism by definition locks onto an act or potential act in one way only, and that is exactly why it is absolute!

In other words, the commandment contains within itself the basis for moral relativism because people are enabled to interpret what constitutes disobedience or not! If this were not the case, there could never be such an entity as a "just war" nor would the state be permitted to execute criminals, nor would people ever be allowed to respond in self-defense.

If such exceptions can occur in one moral realm (for one "commandment") they can occur for all the others.

What this implies is that the Ten Commandments can't be adopted as an absolute moral standard. Indeed, they aren't even a good relative standard. (For example, virtually no sins of omission are covered. Thus, a kid who is aware a classmate plans to carry out another Columbine massacre but doesn't tell anyone, isn't held to account.)

Nor can any other absolute moral standard be embraced, and here we'd do well to remind oururselves of the words of Jacob Bronowski when he visited Auschwitz and pointed to the gas chambers, (in the BBC documentary The Ascent of Man and the book by the same name). As he put it (p.235):

And of course, the Christian Inquisition as he notes, was no different. Heretics, atheists ...anyone not kowtowing to the then Church's dogmas could be burnt at the stake or tortured...because the Church held supreme absolute authority- and no one was permitted to question it.

At the same time, the Pope is correct in that pure moral relativism can't be the answer. Just because wives who stray are permitted to be severely beaten (and sometimes killed) in Brazil doesn't mean we allow it in the U.S. Merely because young girls are subjected to clitorodectomy in parts of sub-Sahara Africa doesn't mean we permit it here. And merely because "common law" marriage is the norm or standard in much of the West Indies, doesn't mean it can become the moral norm in the U.S.

So, if neither moral absolutism or moral relativism is the answer, then what is? Author Michael Shermer gives what is perhaps the best solution to the conundrum of ethics:

"moral provisionalism" or what I would call: "ethical incrementalism"

1) Abortion: According to ethical incrementalism, abortion cannot be ethical in ALL circumstances for all conditions. Thus, since Sagan and Druyan (PARADE, April, 1990) have noted that fetal brain waves appear past 6 months, NO abortions should normally be allowed in the third trimester. The only (provisional) exceptions would be: a) the health of the mother (e.g. if she were to have the child she'd die), or b) case of incest or rape - wherein having the child would create extreme mental trauma for the victim. (By that I mean possible psychosis or severe depression, including attempted suicide).

In the judicious application of ethical incrementalism, NO war would be permitted in the U.S.A. unless an actual DECLARATION of WAR by congress is made. This would give congress the opportunity to exercise its constitutional rights, and impart moral and ethical authority in rendering a war truly just. It would also eliminate the odious recent examples of "wars of choice" - which destroy lives and treasure as they impoverish the nation.

In this light, we'd have no more Vietnams, Iraqs, Afghanistans or other adventures...finagled by the executive branch outside the parameters of congressional validation. For too long wars have been waged “through the back door” at great financial and moral cost to the U.S. The Iraq invasion, for example, never would have been allowed had an actual declaration of war been demanded by congress....as opposed to just meekly rolling over for Dubya, Cheney and their military-fascist oil clique.

These are just a few examples, and many more might be cited or found. The point is that there is a middle way, and ethically conscientious humans ought to seek to pursue it as opposed to pretensions to either a facile absolutism or equally facile relativism. Moreover, the provisionalist morality route is more in synch with the actual brain capacities (as well as defects) of real life humans. In essence, it makes little sense to posit utopian standards if the species' brain limits won't be able to manifest it. Much of this work was done by neuro-scientists like Robert Ornstein (The Evolution of Consciousness) who showed that the emotional circuits are largely isolated from key brain regions, including in the neocortex. This leads to immense disconnects, say between moral-ethical behavior and intelligence.

In addition, the presence of atavistic reptilian and other carryovers in our ancient brain (the reticular formation) always miltiates against any perfective actions, or attainment of moral ideals which are beyond the limits of that brain region to acknowledge or accept.

In other words, Pope, the "Ten Commandments" only goes so far. Humans also need to deal in reality, in a purposeless cosmos, and moral provisionalism provides that basis.
Posted by Copernicus at 9:31 AM