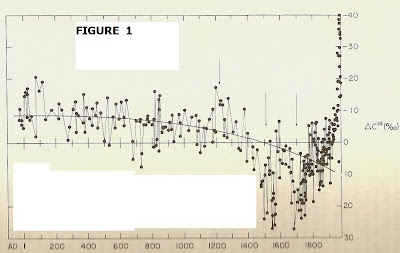 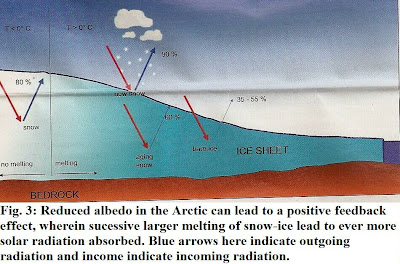 I have a serious problem with poseurs and know nothings bloviating on things they know next to nada about. And that starts with FAUX News talking heads and Business writers from The Wall Street Journal. Up to now I've not seen one single solitary rational or fact-based column from any of these twerps, and the latest to parade his ignorance is none other than Holman W. Jenkins, Jr ('How Green Became Obama's Albatross', today, p. A13)

Jenkins' column tries to paint Obama as some kind of Machiavellian pragmatist who "is enough of a free thinker to understand that global warming theory may be wrong." Hardly, because no president could be that dumb, or reckless ....what with the evidence available which little Holman can't seem to locate no matter how hard he tries. Here, of course, I am discriminating between a genuine free thinker (who may be pondering currently whether permafrost melting and methane or CO2 is the biggst nonlinear driver) and a numbnut who thinks the jury is still out when it's been "in" for over 15 years!

To try and bolster his case that global warming isn't a credible theory, Jenkins resorts to snide quotations of Al Gore whose support arises by invoking a "consensus of scientists" or "the respected judgment of scientists" rather than specific data. But nowhere does Jenkins, Jr. cite any materials, papers or evidence that backs up his case that global warming theory is unproven.

Among my gripes is Jenkins' recycling of a long duration canard by the denier brigade which ought to have ended long ago. He writes:

"The temperature data are so noisy that they reveal no pattern connecting rising CO2 in the industrial age with temperature trends".

Leading one to ask if Holman deliberately makes a concerted effort at being an idiot, or if it just happens. As shown from Figs. 1, 2 (attached), there are two clearly indicated patterns that quash Jenkins' denier fantasies. In Fig. 1 we have the well known delta Carbon isotope ratio data (stretching back into antiquity) that gives the 2000-year record of C14:C12 deviations. This was compiled by P.E. Damon ('The Solar Output and Its Variation', The University of Colorado Press, Boulder, 1977).

To conform with solar activity the plot is such that increasing radiocarbon (C14) is downward and indicated with (+). The deviations in parts per thousand are shown relative to an arbitrary 19th century reference level. As the late solar physicist John Eddy has observed concerning this output (Eddy, The New Solar Physics. p. 17):

“The gradual fall from left to right (increasing C14/C12 ratio) is…probably not a solar effect but the result of the known, slow decrease in the strength of the Earth’s magnetic moment... exposing the Earth to ever-increased cosmic ray fluxes and increased radiocarbon production.

The sharp upward spike at the modern end of the curve, representing a marked drop in relative radiocarbon, is generally attributed to anthropogenic causes—the mark of increased population and the Industrial Age"

Analyzing this record, it is clear that the magnitude of the Middle Ages' warming period (relative C14 strength of ~ -18), for example, is less than about ½ the relative effect attributed mainly to anthropogenic sources in the modern era (-40). Even if one fourth the latter magnitude is assigned to solar activity (based on solar variability component detected over 1861-1990 amounting to 0.1- 0.5 W/m^2 vs. 2.0 to 2.8 W/m^2 for heating component arising from greenhouse gas emissions, cf. Martin I. Hoffert et al, in Nature, Vol. 401, p. 764) the anthropogenic effect is at least 1.5x that for the last (exclusively solar) warming period.

These results comport with modern findings that the last ten years have been the warmest ever. (Not that warming "has stopped the past decade" as idiot deniers screech!) This is according to data from the World Meteorological Office. For reference: parts of Greenland had an average temperature 5.4 F above normal. Meanwhile, Russian officials have ascribed 11,000 “excess deaths” due to heat, arising from their prolonged heat wave. According to the World Meterological Observatory:

"The year 2010 is almost certain to rank in the top three warmest years since the beginning of instrumental records in 1850.”

If Jenkins had the innate intelligence to look for the patterns, he might also have run into the data graph shown in Fig. 2, which includes data compiled by the National Climate Data Center and NOAA, the National Oceanographic and Atmospheric Administration. As noted here there is a long stable level of atmospheric carbon dioxide (at about 285 parts per million) until humans begin burning fossil fuels such as coal in the mid-19th century. Moreover, this graph and the exposed pattern coincides almost perfectly with the earlier graph of the C14:C12 isotope deviations ratio over time.

Not content to display himself as a half-idiot, Jenkins next blathers away to confirm he is a total one:

"Some say because CO2 is a 'greenhouse' gas, 'Shut Up!' But the known relationship between carbon and climate doesn't actually indicate a reason to worry."

It doesn't? If the graphs of Figs. 1 and 2 don't scare the bejeezus out of you, Mr. Jenkins, then maybe this additional fact should, concerning the contribution of rising CO2 concentrations to a warming world: we are adding CO2 at the additional concentraton rate of 2 ppm/ year and the heating insolation is increasing at 2 watts/yr. The CO2 concentration now stands at nearly 380 ppm, and we believe the threshold to trigger the runaway greenhouse effect will kick in between 480- 500 ppm. This means, and I'm assuming even Jenkins has taken basic arithmetic, that we will hit that threshold in 50 years. But that's assuming we don't amp up the carbon use and deposit even more in the atmosphere, especially as now the permafrost is melting all around the Arctic, releasing gigatonnes of methane, another greenhouse gas.

Oh, and if those pattern graphs don't scare the ass off Jenkins, he might want to take a good long view of this video previously posted, documenting the extent of glaciers melting worldwide.

Anyone watching this documented evidence who isn't terrified, has lost most of his or her brain neurons. We also know that this process provides one of the nonlinear drivers toward catastrophic climate change. Melting of ice caps and glaciers (already occurring) results in diminished albedo (fraction of solar radiation reflected back into space), a darker Earth surface - with more infrared radiation (e.g. HEAT) being absorbed - reinforcing and enhancing global warming. As more ice melts from the polar regions, the positive feedback from lowering albedo proceeds faster.

In the end, Jenkins - like his fellow global warming biz bunch deniers (on the Journal staff), are more media whores in the service of corporate-cultivated agnotology.

Stanford historian of science Robert Proctor has referred to the trend of skeptic science sown deliberately and for political or economic ends - e.g. in imparting ignorance and faux skepticism, agnotology. Derived from the Greek 'agnosis' and hence the study of culturally constructed ignorance, It is achieved primarily by sowing the teeniest nugget of doubt in whatever claim is made (and as we know NO scientific theory is free of uncertainty)

Proctor notes that when a society doesn't know something it is often because special (often paid) interests have worked hard to sow immense confusion on the issue. People read 'A' then see 'B' ostensibly refuting it, and without a hard science background themselves (at least two years of university physics or chemistry plus calculus), are "lost at sea". In this case, a two bit hack like Jenkins knows before hand most of his readers (now mainly chattering over "Obamacare") will never do the research on their own to expose his stupid claims, including:

"To produce worrisome scenarios, climate models must posit 'feedbacks' that magnify the impact of CO2 by 300% to 500%"

But any physicist who's ever toyed with a basic electronic sound system understands the principle of positive and negative feedback. And he will also understand the role of positive feedback in terms of efffect from a changing planetary albedo such as shown in Fig. 3 ongoing near the Arctic. Quite clearly, this moron has never taken a serious physics course in his life which is one reason he shouldn't be expostulating on global warming.

The truth is that anti-global warming hacks like Jenkins are a dime a dozen. The tragedy is that millions of otherwise intelligent people buy into their ignorant bollocks.
Posted by Copernicus at 1:25 PM

Thanks for the link, Claire. will check it out!

Well put. Also, politicians who ignore scientific evidence have no business holding office, and especially being in charge of science/environment commodities, like Jim Inhofe, the oil addict from Oklahoma.