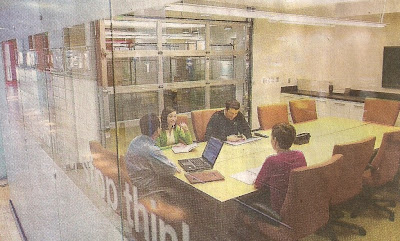 One of the new corporate arrangements based on 'open seating' and rooms with transparent walls. No wonder so many workers lose it. 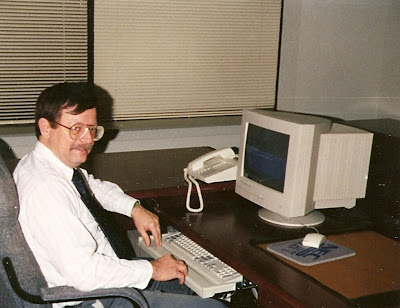 Me, working late, ca. 1995, in my own corner office at the radiotherapy software corporation I once worked.

In my lone stint in corporate America, ca. 1993-96, as a technical documentations specialist for a radiotherapy software corporation, I arrived to have one of the largest corner offices in the building (see photo). As my immediate supervisor put it, given the outside distractions this was more than warranted and besides I'd already proven myself during a stint of technical document preparations while working from home.

Following a company merger, in 1994, with another (firm ware) company originally based in Richmond, VA (they all moved to Maryland), numerous passersby from the new outfit would stop by - generally during lunch time, and query how it was I managed to get such a large corner office, with a spacious window no less, while they were given 5' x 5' cubicles. I usually shrugged shoulders then replied, 'Maybe because I was hired while the building still had plenty of spacious offices and before the merger!" So true.

Interestingly, what was once an odd corporate quirk with workers crammed into "cubes" ca. 1994, has now become standard fare. The corner office for an ordinary employee has now evidently gone the way of the dodo. Now, the American corporate worker is expected to continue to produce outstanding work in his open cube while within earshot of some bozo yammering on his cell phone to his honey, another character gorging on sardines and munching them loudly while smacking lips and two others chattering away to each other about "American Idol". Is it any wonder 1 in 9 Americans is now under care for psychological distress or labeled as "mentally unstable"?

Worse, according to a recent Wall Street Journal article ('Indecent Exposure: The Downsides of Working in a Glass Office', Jan. 4, p. D1) ""some 68% of U.S. offices have an 'open plan' or 'open seating' design, with the desks separated by low or no walls (see photo) according to a 2010 survey by International Facilities Management Association".

Of course the corps that have these abominable arrangements brag on them until the cows come home: they afford "better communication and collaboration", more natural light, "expansive outdoor views for all, and ...lower real estate and energy costs. Personally, I believe the last is the real reason and all the others are bullshit. Stuff offered to help the poor captives believe they have some advantage the shmoozer in a real bona fide office lacks. But as one of the honchos overseeing the open wall employees finally admitted: "One of the things we underestimated was the need for individual privacy".

Well, uh ....duh! Aren't these bird brains aware that one of the first things that occurs to mental health patients is they're placed in open space rooms ...where of course they have to be fed incessant meds to keep them from combusting.

According to another worker quoted in the piece and stuffed into one of these 'fishbowls': given floor to ceiling glass walls of her communal office facing outside, "people who drive by would call me from a block away and see me in my office and make fun of me".

In another case, with an arrangement like that shown in the top image, an exec discussing confidential matters with an underling - because of numerous casual interruptions- eventually had to move to his car in the company parking lot to obtain the privacy needed to discuss a critical business matter. Meanwhile, the article cites a Manhattan company whose workers were incessantly "bothered by seeing passersby while they were concentrating on phone calls".

Hence, there are obvious reasons here why companies could improve their bottom lines and productivity by opting for less office transparency. Do they want to? Hell no! Recall these are the same companies that have implemented spyview camera swith 180 degree wide angle lenses and mounted them everywhere from employee restrooms, to light fixtures in hallways - to overhear conversations. They are also the same companies who have inserted software that actually spies on employees' by counting their keystrokes or providing instant views of their own computer screens, to see if they are web surfing when they ought to be working.

In such a corporate Gulag, why would anyone stay for such humiliation? Maybe because in this Overclass dominated serf society where only the very few will reap riches on their own, they can't afford not to!
Posted by Copernicus at 1:15 PM

I agree with you; it's not about all the go green warm fuzzy stuff, it's about saving money, as well as the continual grinding down of the worker bees. They know what they're doing, and often, many of them know damn well we know what they're doing. But they also know there's not much we can do about it so what do they care? They don't. Money, control. All it is, all it was, all it will be.