Baltimore receiver Lee Evans has the winning TD catch knocked out of his hands at the end of last week's Baltimore - New England game. Was the game fixed to ensure a Giants-Patriots revenge match? 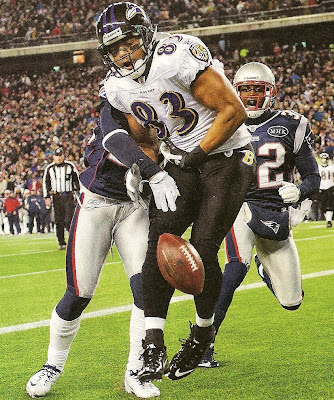 Some fifteen years ago while working for a radiotherapy software company, a co-worker and I got into an animated discussion over professional football. He basically said he never followed any of it because "most of the games are fixed". I asked him to defend that point of view with some kind of evidence but he refrained, only claiming that I should "Look at some of the most critical plays and the calls of the refs!"

I basically dismissed his suspicions as looney, paranoid nonsense. Then, in the wake of the 15-1 Packers' loss to the NY Giants by 37-20, I saw it surface again on the Packer forums at the Milwaukee Journal -Sentinel. More than one devastated fan, still in disbelief, wrote to the effect that "It is simply impossible the Packers could have been beaten like this, at home, with more than three weeks to prepare, and a record like they have! I believe the game was fixed to enable a rematch of the Giants-Patriots!"

But they did lose! And rather than dream up suspicious fantasies, and let's bear in mind the Pack got the benefit of a fumble call (by Greg Jennings) they never should have! In addition, in today's Green Bay Press-Gazette, defender Charles Woodson admitted that the Giants played better and they "wanted the game more than we did".

Now after the championship games last W/E the conspiracy meme continues to surface. The NFL had its "chosen teams" - with the best markets, picked for a "revenge match" between Tom Brady and Eli Manning. As with all loosely thought out conspiracy theories, these rest on selective confirmation, and then seeing almost all plays or calls as evidence of that confirmation of a conspiracy. For example, the memes have now extended to the players who for whatever reason boffed critical plays leading to the opponents to get in. Kyle Williams of the 49'ers for example, mishandled one punt during regulation leading to a Giants' extra possession possession and an Eli Manning TD. Then, in overtime, Williams fumbled a punt that led to the winning field goal. "He was on the take!" came the paranoid loser fans bleating. "They paid him to fumble!"

This, of course, is nonsense, and anyone watching Kyle after the game could see the last thing he wanted was to hand the game over to the Giants! (Which is also why it says very little of certain SF fans to have tweeted him threats, including death threats, according to his dad Ken Williams, a coach for the Chicago White sox baseball team). The same goes for insinuations that Baltimore Ravens' kicker Billy Cundiff deliberately botched a 32-yard kick that would have sent the Ravens- Patriots' game to Overtime. That was the last thing Cundiff wanted.

Then there was Baltimore receiver Lee Evans dropped touchdown pass at the end (see image), with barely 20 secs remaining. He makes that catch and the Ravens pack their bags for SuperBowl XLVVI. Maybe he dropped that pass deliberately, paid off several millions to throw the game for the Patriots to win! Again, nonsense, because Billy Cundiff still had the chance to tie the game, it did't pivot on Evans' catch, though yes had he made it it's a Ravens' win.

If there was anything suspicious near the end of the game it wasn't Evans' botched catch or Cundiff's miss, but rather a referee non-call with barely 50 seconds left when Patriots' safety Sterling Moore committed a pass interference penalty against Ravens' tight end, Dennis Pitta. Most serious observers (e.g. Baltimore Sun columnist John Eisenberg) agree it was a non-call that had tremendous consequences and it was also a call totally within the purview of the "Zebras". Had the defender Moore been penalized (as he ought to have been, on watching the play again) the Ravens' would have had the ball on their 1 -yard line and a new set of downs. Almost certainly, they'd have found a way to score 7, and win the game.

This is a harder one to skewer, though one might make the case that the refs were deliberately willing to "let the players play" without interfering. Still, the Ravens were penalized with a number of earlier calls that looked twitchy, while the Pats seemed to have escaped. But again, maybe this is merely looking for "confirmation" of a posited conspiracy. Still, given the game decided who was to travel to the SuperBowl, who knows what might have been had the Pats' defender (the same guy who knocked the ball from Evans' hands) been flagged for a PI.

Eyes are now trained on the coming Superbowl, and the "conspiracy game fix" theorists in SF, Baltimore and Green Bay are now watching carefully to see if Part II of their speculations comes true - that is, the Patriots are allowed to win to assure "revenge" for Brady's Pats in a rematch with the team that ignominously ended their perfect season in 2008. Needless to say, all eyes will be trained squarely on the refs in this game....and Brady and the Pats better earn their Lombardi trophy this time....no help from the Zebras!
Posted by Copernicus at 10:50 AM