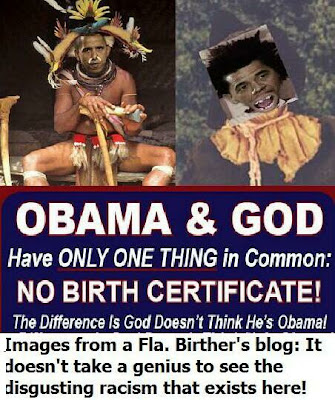 Let's not be coy here, or pretend that our eyes deceive us: the Birther segment of the Tea Party Idiots (that is, most of them) are out and out racists. Their continued yelping and whining for Obama to prove he's American is none other than a contemptible, thinly disguised racist ploy - little different from that used in Florida's Duval County in November, 2000, when black voters at the polls were required to prove they weren't felons. (Since Fla. Secretary of State Katherine Harris had deliberately listed nearly 57,000 of them on Choicepoint Felons' Rolls. See, e.g. 'The Best Democracy Money Can Buy', Chapter One, by Greg Palast.)

The latest disgusting tactic is compliments of a retired Air Force Colonel named Gregory Hollister, of Colorado Springs. According to this imp, he may be retired but since he can still be called to "active duty" as long as he lives (I'm trying to imagine a 99 year old geezer in his fly suit) then he has to know that the one who orders him off to duty is truly a Commander- in-Chief, in other words, born 'n bred American.

To which I reply: Horse shit! This, like other Birther excuses, is merely another subterfuge to conceal a base racism at work: to wit, that none of these morons can tolerate a black man as their President. Because they can't admit that to themselves, for whatever reason, they invent horse shit distractions, like Obama having not really been born in the U.S. of A., or actually being a Muslim, not a Christian, or having a "Socialist" agenda.

By Hollister's claim in The Gazette, a private investigator (Susan Daniels of Ohio), provided him with what was purported to be the President's Social Security number. If indeed this is true, and moreover laws permit garnering someone's SS number so easily, then we need MUCH stricter laws to eliminate this identity theft loophole. Because make no mistake here, once anyone has your SS Number they have the pick key to your identity and all your other information. This is why European nations zealously protect their own citizens and are so strict with critical information and prohibit its buying or selling. Be this as it may, it doesn't exculpate Hollister for impersonating a federal official! If he really believes he's done nothing illegal he's a bigger idiot than even most of his tea bagger-birther brethren with their room temperature IQs.

The vast cohort of cloaked racist, tea bagger idiots (a new Gallup poll shows 51% of Repukes are in this category), claim that Obama was born in Indonesia or Kenya and the birth certificate offered online by Hawaiian authorities (showing he was born in Honolulu) is a forgery. Thus, being born outside the U.S. makes him ineligible to hold the office of the President.

Now, is it truly feasible that none of these closet racists knows or understands the grilling one receives before he can even submit election papers, for any high office? If one has undergone a background check for a federal position, he has some clue. One of the basics is that FBI agents call on anyone who knows you to find out any aberrant thing they can, that includes whether your birth disqualifies you from holding a federal office.

If the tea bagger birthers don't know that, then they're either: a) grossly ignorant and uneducated, or b) stupid. At the very least they all ought to sign themselves in to the nearest psych ward to be administered ECT for several times each week, preferably while in straight jackets. These people (and I include Donald Trump in this, if in fact he's mutated to Birther-ism) have no business walking around outside.

The fact Hollister already has had a birther case pre-empted by the U.S. Supreme Court (they refused, on Jan. 16, to hear the lawsuit he brought- even without a response from the White House) shows how clueless he is, not to mention the other birthers.

It's time Birthers and other Obama Haters, retired or otherwise, ex-military or ex-nutcase, get a life and start doing something constructive with their time as opposed to waging an insane and futile battle agianst the nation's first black President - using the excuse he "wasn't born in the country".
Posted by Copernicus at 9:18 AM