Can Statin Drugs Really be THIS Bad? 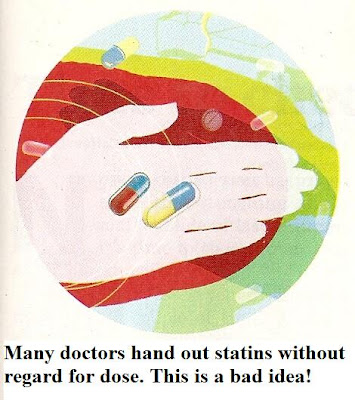 Check any of the numbers based on the most rudimentary inquiry and you'll be amazed to learn there are probably nearly 40 million Americans taking one or other statin drug. It could be Lipitor, or Zocor, or even a generic like lovostatin. Never mind that even without statins Americans would be the most medicated population on the face of the planet. So what happened?

Basically, a monumental PR-sell job by Big PhRma combined with ever more "medicalized" conditions requiring drug interventions, or so we are led to believe. For example, 50 or so years ago no one would have thought or conceived of giving a medication to a kid who was hyperactive. But then 50 years ago kids were allowed out at least twice a day for recess and play time. Whatever nervous energy they had was discharged. (Even more when they returned home, to play outside or bike around the neighborhood, instead of staying glued to a computer monitor!)

Similarly with "bad fats" and cholesterol. Until tests for the latter were available no one gave it a second thought. My grandfather on my mother's side would - in late 1959 - have been the poster boy for statin intervention, given he consumed five slices of bacon each morning with four eggs, and heavily buttered bread (three slices), then at lunch four large salami or bratwurst sandwiches, chased at night with left over lamb roast, accompanied by heaping mashed potatoes and thick bread dipped in lamb suet. His one time reading of cholesterol (by 1979) was well over 220 but he lived to the ripe old age of 89.

Which proves one more thing the statin makers don't want you to know: The base cause of artery thickening, and plaques is NOT from cholesterol per se, but rather a chemical known as c-reactive protein, or CRP. It is this chemical that incites the inflammation that causes artery walls to respond by lining themselves. Yes, the presence of excess cholesterol can increase the probability of inflammation, but it's CRP which is the catalyst.

All of which is reason to be wary of docs pushing statins, as a book by Jay S. Cohen, M.D. ('Statin Drugs and Their Natural Alternatives', Square One Publishers, 2005) also makes clear.

What I liked about the book is how many myths it explodes, while also showing how many doctors who prescribe these "wonder drugs" often go overboard with the doses, not realizing many patients (especially older) may be medication-sensitive and have severe reactions when ordered to take the prescribed dose printed on the bottles. In fact, this published dose is merely the average from drug studies which found less effectuality with some very low dose and severe reactions with a 50% higher one. Thus, 20 mg of Lipitor may be prescribed, based on the drug insert info, but in fact this may be an overdose for a drug-sensitive 70-year old who suddenly develops pulmonary fibrosis or kidney problems because of it.

Thus, Cohen's judicious recommendation is: LOW and SLOW. Let all patients start with low doses, then - if need be- work SLOWLY up to higher ones. As he observes (p. 78):

"Most side effects are dose-related , so preventing side effects means starting low and going slow, which is particularly important in seniors. Indeed, despite some of its questionable decisions, the FDA agrees in principle"

"There is evidence that older adults tend to be more sensitive to drugs than younger adults, due to their generally slower metabolisms and organ functions. The old adage....'start low and go slow' applies especially to the elderly".

The basis for starting at low doses is reinforced when one consults the drug manufacturers FDA studies themselves. For example, Cohen gives these examples to make his point (p. 38):

"The manufacturers' initial dose of Pravachol is 40 mg/day, yet in the manufacturers' low dose study using just 10 mg/ day, 83% of people with mild to moderate cholesterol elevations reached their target LDL-C levels of 130 mg/dl or less. Four studies by Mevacor's manufacturer showed that just 10 mg of the drug combined with diet coundseling, reduced cholesterol successfully in 69- 75% of subjects"

Why is this so important? One need only look at the scope of side effects that can emerge, while also bearing in mind (as Cohen points out, Chapter 7) that barely 5% of major side effects are documented. That means 95% are not, and it is up to patients to bring them to light of their physicians since the research documentation always lags behind patient actual experience.

"Science does not begin and end with the drug company research. Indeed, it is a notoriously known fact that drug company studies often fail to identify many common side effects in everyday practice".

One long term problem identified with statin use is peripheral nerve damage, injuries (Cohen, p. 60). A 2002 study noted that "people who had taken statins were 4- 14 times more likely to develop polyneuropathy".

These are peripheral nerve injuries that produce numbness, tingling, pain and weakness in the limbs. The statistics based on projected use translate to 20,000 such injuries per year and that may well be underestimated (Cohen, ibid.). More worrisome is that even stopping the drug doesn't always halt the symptoms. Cohen cites (ibid.) some neuorapathies that end up being very painful and permanent, even after total cessation of statin intake.

Cohen, in conjunction with these issues' writes (p. 84):

In other words, even one or two side effects can soon lead to a "prescription cascade" with more meds needed to deal with the side effects arising from the statin. No wonder so many seniors have found themselves in the "donut hole" and the average over-65 senior takes six meds!

More worrisome is a point Cohen makes (p. 86)as to the PDR and drug info inserts being outdated as to side effects inventory:

"There is no routine, expeditious method for incorporating (side effects) information into package inserts or the PDR unless it is very serious or lethal. Thus, the lists in package inserts and the PDR are usually incomplete and outdated. However, many doctors assume the information has been updated for each yearly edition of the PDR. Most drug write-ups have not."

One of the glaring examples of this (ibid.) is memory loss, dysfunction and cognitive impairment. Cohen again:

"Statin-related memory deficits are a perfect example. For years, evidence has been mounting that statins can impair cognitive and memory functioning, yet many statin package inserts do not list cognitive problems or forgetfulness among their side effects. These reactions may be subtle but they can also be very serious."

He then cites examples of older patients believing they have Alzheimers, or have suffered a stroke. In one case, a woman's language was totally garbled and when she meant to ask: 'Please pass the bread', it came out: 'Please pass that elephant!' As with the neuropathy, merely halting the statins didn't always stop the cognitive problems and decline.

Truth be told, given this hidden side effect, it could well be that many who believe they're in the initial stages of Alzheimers are actually suffering from statin side effects unreported in the lists inserted into the packages.

If this blog helps more people, prospective patients, take more care (including questioning their doctors before starting a statin regimen, and demanding "low and slow") it will have been worth the time to write it! As Cohen puts it (p. 97):

"Most doctors are dedicated, knowledgeable people who want to help their patients. Most doctors care. Yet like all humans, they have their viewpoints and biases. Doctors are taught to trust the information they receive and to distrust information from non-mainstream sources, especially if it is anecdotal or subjective. They are concerned that under-dosing can cause ineffective treatment. Most doctors have not seen much, if any, of the low dose data. Drug companies are their main source of information."

This is why I recommend that IF a person is going to challenge a doctor, be careful not to alienate them and just assume from the start they're under the spell of PHRma. The way to at least try to break through is to cite a paper from within the mainstream, and what better source to trust than the FDA? Thus, I recommend starting out with the previously cited FDA Consumer Magazine (Sept.-Oct. 1997, 'Medications in Older Adults'), and then the book by Cohen.

Good luck, and make your case cogently. You don't want to be numbered among those on transplant lists waiting for kidneys or livers, nor do you want to suffer Alzheimer-type symptoms before you have to!
Posted by Copernicus at 9:04 AM