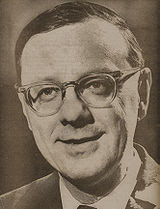 Frank Zeidler, the last Socialist Mayor of Milwaukee (1948-1960), showing Democratic Socialists had been elected long before Johnny Reb Teepees began whining about them and ordering them to "love or leave the U.S. of A. " How 'bout instead all pro-Confederate dummies leave? 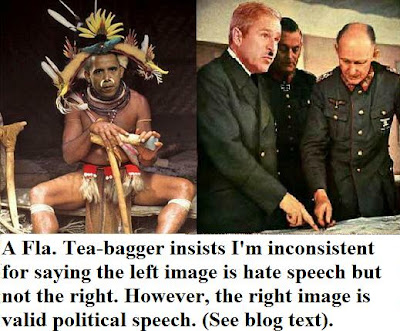 It never ceases to amaze me how limitless the Tea-bagger phonies are in their abject cluelessness, as well as arrogance. In this guise, it seems a certain Florida Tee-pee'er has been visiting my blog and lambasting it on his, never mind all the lambasting is based on either hubris or mistaken notions (for example, of what constitutes "hate speech" and what doesn't).

First, this character doesn't like Democratic Socialism, never mind he doesn't even comprehend it and thinks it's some noveaux form of Communism, which belief I already thoroughly debunked:

So, then, as peculiar to his kind, he comes up with the totally unoriginal injunction that we (Democratic Socialists) LEAVE the U.S. of A. unless we "love" it! Get that? We who are born here are to leave merely because we happen to see a better and more equitable economic way that is founded on higher values of social justice? So homeless kids aren't forced to go to bed hungry each night (as shown on the first '60 Minutes' segment last evening) because rich pigs have to get their tax cut extensions!

This nimrod orders us to "leave", blissfully and totally unaware that HE himself once lived (briefly) under the Democratic Socialist reign of Milwaukee Mayor Frank Zeidler (see photo). But this is typical of these conservatives today, so smitten by Confederate values (including racism) they forget one city in the U.S. once featured a string of Democratic Socialist mayors. So why should We Democratic Socialists leave? If the asswipe capitalists can't compete in the marketplace of ideas, and are so weak, whiny and pathetic they need us to leave, shouldn't they call it a day? If they aren't weak then let them compete with us for power, attention and minds!

Note that before Zeidler, Emil Seidl became Milwaukee's first Socialist Mayor in 1910, followed by Daniel Hogan who lasted from 1916-1940 keeping the city out of debt during the Great Depression. Zeidler in his mayoral election campaign noted the problem of ethnic division in other parts of the country and how this was exploited especially by wealthy Republicans, to keep working class people divided. Zeidler vowed, if elected, he’d ameliorate these divisions and ensure all Milwaukeean Working class folks benefited – whether Croatian, German, Polish or whatever. Zeidler ended up winning three terms, enduring from 1948 until 1960 and turning Milwaukee into a prosperous post-war city.

Jobs proliferated, especially in major manufacturing (Allis –Chalmers etc.) while the Breweries hired thousands with excellent pay and benefits, including health care. Housing abounded as well, affordable housing off of Greenfield Ave. and Teutonia and in other suburbs to the north and west. Parks, meanwhile, were the envy of many other cities for their beautiful layouts, amenities and services.

Milwaukee didn't really begin to deteriorate (and experience a mass exodus of population) until Republican mayoral candidates were able to buy elections with vast sums of corporate cash in the late 60s. But the point it, Democratic Socialists governed the city for decades, hence establishing a strong social justice case.

Second, the blogger from Florida fumes that my last blog on free speech:

was one-sided, and didn't allow or assert that hate speech existed when "libos" depicted Bush Jr. as a Hitler clone (see image). He argues that if I or other "libos" can portray Bush as a Hitler clone or imitation, then his depiction of Obama as a witch doctor (see image from his blog) is equally justified and not hate speech. But again, he gets it wrong, totally!

You see, as noted in my earlier blog (see link) , in Barbados he'd get five to ten at Glendairy for his depiction of Obama (or any black man) because it is RACIST. It attacks Obama on the basis of RACE, by depicting him with an ugly racial stereotype of a primitive witch doctor. (I note this because through many years in the Deep South, e.g. New Orleans, I'd seen similar depictions of African-American candidates or leading citizens. At all times those depictions were racist, designed or put up by KKK'ers or States Rights parties or White Citizen Councils. But as usual, this guy is too young to recall).\

Now, what about the other depiction of Bush? it may astound this Teepee to know that this is valid political speech! Bush is not being attacked on the basis of his race (as the witch doctor portrayal of Obama) but on the basis of his policies which simple fact checking would show were in conformance or analogous to Hitler's. Don't believe me? Then let's go through them!

1) Like Hitler, Bush was never formally and officially elected by a majority of voters (both the 2000 and 2004 elections were stolen, though by different modus operandi). In 2001, Bush received 500,000 fewer votes than Al Gore but was shoehorned in via the Supreme Court's 5-4 verdict stopping Florida's recount which, had it continued, would have shown Duval County lost 51,000 Democratic African-American votes by the ruse of then Secretary Katherine Harris putting them all on "felon's list" with Choicepoint. (See: The Best Democracy Money Can Buy, Chapter One)


2) Like Hitler, one of the first things Bush did after a criminal attack on 9/11, was to limit or repeal civil liberties. Hitler did it after the Reichstag fire, under an emergency 'Decree', Bush under the 'Patriot Act' (which had been prepared BEFORE 9-11!)

4) Like Hitler, Bush and his administration acted unilaterally -without any consultations in respect to international laws and treaties - from Kyoto to the International Criminal Court in the Hague. Like Hitler, international treaty after treaty and concordance was violated, broken.

5) Like Hitler, Bush intimidated his opposition into political cowardice, thereby further reinforcing his bogus 'power with no mandate'.

6) Like Hitler - in invading The Sudetenland, Poland - etc. and depicting 'terror' in those nations, Bush invaded Afghanistan, Iraq and made plans to invade (“regime change”) a host of other nations (N. Korea, Cuba, Iran etc.). Hitler did it to neutralize 'commies' and "Jew terrorists", Bush to neutralize Islamic 'terrorists'.

7) Hitler had Josef Goebbels as “Minister of Propaganda” – Bush had Herr Karl Rove. (Recall the number he did on CIA Agent and officer Valerie Plame when her husband exposed, in a Wall Street Journal article, that the whole yellowcake ruse which purportedly tied Iraq to nukes was a tissue of lies)

8) Hitler had the “Reich Courts” to hand down a host of deleterious verdicts on the citizenry, Bush has his specially-crafted “Military commission” (compliments of the Military Commissions Act of 2006, the same responsible for currently forcing Pvt. Bradley Manning – a captive – to remain naked for long periods, under Marine guard in the Brig. Charming!)

9) Hitler had a general spy system based on neighbors spying on each other- Bush had the NSA, plus provisions of the “Patriot Act” that allowed black bag searches without informing anyone or getting a warrant first..

10) In each case, Bush’s pro-Militarist America and Hitler’s Germany - a 'bogey' was invented to justify marshaling enormous budget sums for military material and effectively implementing a perpetual 'state of war'. In this perpetual state of war, all opposition could be cowed - as well as the population in general.

11) Hitler had the paradigm of the 'Fuhrer Auswahl' to determine whether any previous existing legislation could be overturned at will, Bush had "signing statements" appended to each piece of legislation.

12) Hitler invoked the "Führer Doctrine" to justify invasion of any contry deemed a threat to Germany, while Bush had his "Bush Doctrine" to do the same.

Thus, we see this tea bagger's squealing like a stuck pig is all for naught. If the profile fits, then it gets worn, and Bush met the criteria for a valid Hitler analogy. If most people, the majority of the American public, are too historically ignorant to see that....well, tough shit!
Posted by Copernicus at 10:49 AM

Brilliant summary points on how and why Bush is comparable to Hitler. Shwoing those you've showed also the image of Bush as Hitler is political speech. I am going to wait to see if your brother can do the same to justify his reprehensible pictures of Obama!