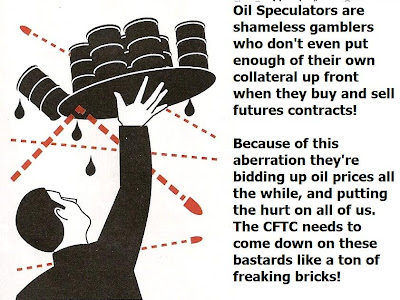 The jig is up and a number of exhaustive investigative efforts have disclosed the underlying reason for the spike in oil prices (now approaching $106 a barrel) and hence prices at the gas pump: Oil commodity speculators! Thus, the real source has little to do with supply and demand, but rather re-selling artificial "futures contracts" in closed markets to gin up prices and thereby reward big banks, hedge funds and assorted smaller futures contracts traders.

Currently, repeated trading in these oil commodity markets is estimated to be two thirds responsible for the current oil price spikes. Here's basically how it works:


The customer is really an investor, not a real oil or gas purchaser, who bids on a futures contract for a certain price. In other words, he bets that the price of that barrel will rise or fall, but generally will bet on it to increase if events deemed parlous to oil shipments, use or suppy are detected, such as the Libyan revolution. The problem arises when the given futures contract (which may set the price at $90 a barrel) is then resold and the price again bid upwards, say to $98 for a new futures contract, and ever onward.

On the other hand, if the actual laws of supply and demand were applicable here, the real price of oil would be somehwere between $85 and $90 a barrel. Translating plausibly into gas at the pump for maybe $2.50 a gallon, as opposed to $3.30 or more. (Right now the average American is spending nearly one-sixth of his salary on fuel, directly or indirectly. For example, higher food costs arise too, because it takes more fuel at higher prices to send transport the foods to the supermarkets.)

Of course, the speculators and their apologists and protectors in the media don't wish to hear this, nor do they appreciate the daylight cast upon their activities. In the last 2 weeks alone, I counted no less than five counter-attacks (in The Economist, The Wall Street Journal and The Financial Times) against those who sought to make speculators "scape goats". Much umbrage was taken and editorial bile spilled, but I saw little to convince me the speculators were truly the angels depicted: e.g. the "guardians" charged with controlling things in the futures markets for the public good. To which I say, 'Bah', 'Codswallop!' and 'Humbug!"

Commodities traders, like currency speculators (who drove the Thai baht down causing the Asian currency and financial crisis in 1998) are a mixture of casino gambler and bipedal predatory cockroach. They don't give two squats about anything or anyone except making fast money and the faster the better! Indeed, these freaks are piling into the commodities racket precisely because the stock market (their usual casino outlet) is too volatile, and they can't make enough on their investments. It passes them by that the stock market's very volatility arises largely from the price volatility (which attaches to foods, transportation, drugs etc.) incepted by their relentless speculation.

To the apologists for the precious little speculators and "traders", I ask you to examine this article ('Oil Above $140 on Libya Threat to Cut Output') which appeared in The Financial Times last June 27th (p. 22). The article led off:


Then two paragraphs lower (caps are my emphasis):

"TRADERS TOOK THE WARNINGS AS A GREEN LIGHT FOR BUYING AND PUSHED OIL TO A HIGH OF $140.05 a BARREL"

Note, the article said TRADERS (e.g. speculators) pushed oil to that high! Not oil companies, not space aliens ....not the law of supply and demand, but SPECULATORS in the futures market.

This is an important point, since the speculator apologists always begin their counter rants (and insulting the intelligence of the commodities "commoners") by pointing ot that NO actual physical supplies are being diminished, moved or affected by the traders. But no one said they were!

This is much like Enron's shell game (in “energy trading” in 2000), wherein no real kilowatts were generated and moved. Rather kilowatts were shifted on paper and increased costs put on as the transactions crossed particular state lines (say from AZ to CA). In the same way, future costs of future oil are bid upon on PAPER by speculators, and these amounts to something similar to an auction bid. The difference is that in the hidden commodity-energy auction, unlike an actual auction for a real barrel of oil at say, Sotheby's, every manjack pays the final bid!

How to cut these insane practices? Make the bastards put up real money of their own rather than just phantom money! One excellent prescription was proposed last year by Rep. John Dingell (D, MI), to wit, forcing oil speculators to put up collateral of at least 50% of the value of the energy futures in which they trade. Heck, I'd even make it more: say 80%.

In this way, they'd exercise much more caution in their trades, as opposed to coming off as freaking cowboys!

It’s high time that the high priests of the Commodities Futures Trading Commission (CFTC)crack down on the casino operator oil traders and their ilk. It is bad enough that a tanking dollar (because of pusillanimous Fed policies and fear of increasing interest rates in an election year)is causing fuel spikes, but at least we can tame the speculative excesses! Sure, I'm making virtually nada on my return in interest-bearing investments (CDs, money market accounts etc.) so losing money, but it'd be much less painful if food prices were lower as well as gas prices - because the blasted speculators were regulated and had a bit of pain imposed on 'em!
Posted by Copernicus at 9:07 AM