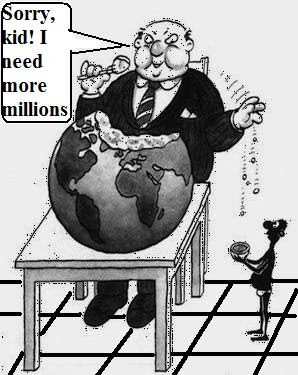 Even as I watch the scenes playing out in Japan, with each helping the other: young assisting old, old helping young and old, and everyone waiting in long lines without rioting (in one case a grocer had to close his cash register since it wasn't recording prices, so the people simply put their purchases back and left quietly) I have to wonder what kind of DNA I might get from them to transfer to many of my countrymen - beset by the "I got mine and to hell with you!" virus.

Now a new twist on that comes with the just-released Fidelity Investments Report, with an article headed: '42 Percent of Millionaires Say They Won't Feel Wealthy Until They Have More Than Seven Million Dollars'. Are you effing kidding me? Little homeless and motherless children in Sendai, Japan are barely able to get one rice ball a day to eat and we have pigs here worrying and fretting over getting their extra millions? (Then some wonder how the French Revolution ever came about, with so many guillotines working overtime!)

Incredibly, Fidelity actually thought several times about putting out the report, realizng how understandably embarrasing it would be! The reason was that it had been prepared just before the Japanese earthquake and tsunami struck. According to Fidelity spokesman, Stephen Austin:

But put it out they did, and it is just as unseemly and disgusting (when viewed against the monstrous human tragedy in Japan) as Austin imagined. The only thing saving them any face is that relatively few Americans have been aware of it. (I am because I regularly read the Business pages, and of course I feel obligated to share what I learned with others who might be interested.)

Just as well, for most ordinary Americans ....now waiting with bated breath as the Repukes get ready to rape the budget and their future welfare, the overriding concerns include impending home foreclosures, rising food and gas prices, and a skyrocketing national debt which they know the elites will exploit to deprive them of their Social Security checks in later life too.

Meanwhile, just five minutes glancing at the nightly news discloses yes, Japan is rife with lessons that rich, poor or in-between Americans could do well to learn (and the Japanese aren't even Christians!) Yet some select Americans see fit to cry and whine: "I don't feel rich because I don't have at least $7 million! Bwaaaa Haaaaa! Boooo Hoooo! Woe is me!"

A more in depth parsing of the Fidelity piece shows the cross-section surveyed represents about 5% of households who hold 56% of the wealth. A full 58% said they "began to feel wealthy" when they had accumulated $1.75 million in investable assets- meaning they probably had $5 million in total assets. The other 42%, despite having nearly that, didn't feel wealthy and were actually scared.

Maybe we need to toss them a sippy cup or two, like the indignant and self-righteous fundies who demand their "Hell" to punish the bad-nasties.

According to Gail Green, an Executive VP at Fidelity:

"It really is a reflection of the anxiety of the pre-retiree ...many of them have an innate fear of old age and picturing what their lives will be like in retirement".

In other words, they're millionaires - yes, with a few obligations like kids in college (btw, how about putting them in less costly public universities as opposed to Ivies, since recent studies have shown no significant differences in outcomes!) but they're frightened they'll run out of money.

Here's a piece of helpful advice for these ninnies with millions but too much time on their hands:

How about you invest in something like volunteering to help OTHERS, instead of obsessing about your investments and finances?

You'll probably sleep better at night, plus finally give away more of that stash to those who really need it!
Posted by Copernicus at 4:04 PM