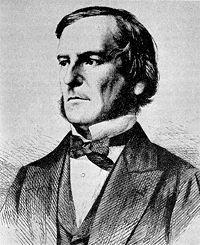 George Boole (after whom Boolean Algebra is named) is the author of the genuine Laws of Thought, by which he sought to develop a symbolic system to embody logic- ultimately leading to the realization that logical and mathematical operations are, to a certain degree, interchangeable.

One caveat before we begin: Boole, even in his day, recognized his laws and symbolic logic would only be as good as the quality of the inputs. Like the financial language known as Intex. i.e.  if the wrong facts and assumptions are used, the output can only be garbage. In the case of the Laws of Thought, if incorrect facts are assumed then false premises are created, resulting in false conclusions.

Boole, in his Chapter II of An Investigation of the Laws of Thought, notes:

“The elements of which all language consists are signs and symbols. Words are signs. Sometimes they are said to represent things, sometimes the operations by which the mind combines together the simple notions of things into complex conceptions…..But words, although in this and other ways they fulfill the office of signs or representative symbols, are not the only signs which we are capable of employing.”

Boole then goes on to note the existence of mathematical signs, such as X, - , + , / and so on. In this way he justifies an entire system that integrates the signs of mathematics with those of words. His critical basis is (ibid.):

“It is necessary that each sign should possess, within the limits of the same discourse or process of reasoning, a fixed interpretation. The necessity of this condition is obvious and founded in the very nature of the subject”

Boole then goes on to articulate propositions by which the analysis and classification of assorted signs (words or mathematical symbols) are advanced.

For Proposition (I) we have:

“All the operations of Language, as an instrument of reasoning, may be conducted by a system of signs composed of the following elements, viz.

2nd. Signs of operation such as +, - , x, standing for those operations of the mind by which the conceptions of things are combined or resolved as to form new conceptions involving the same elements.

And these symbols of Logic are, in their use, subject to definite laws, partly agreeing with and partly differing with the corresponding symbols in the science of Algebra.”

Clearly, from this, Boole expected anyone who'd deign to use the Laws of Thought he compiled to be skilled in algebra. If one had not taken an algebra course or been exposed to it via self-education it is doubtful he’d be able to use the laws effectively, or reason rigorously. We find this, in fact, with many fundies – who are often as deficient in numerous areas of mathematics (algebra, geometry, trig, etc.) as they are in science. For example, pseudo astrophysicist Jason Lisle, who advocates for a "young" Sun thousands of years old when its nuclear processes mean that a single photon can take a million years to reach the solar surface and escape.

Boole implied in his precepts that such people would only have very crude conceptions since their lack of symbolic background wouldn’t allow them to refine what their thoughts held.  In the case of Jason Lisle, it clearly never allowed him to treat seriously the physics of the Sun and its nuclear processes, despite getting a Physics Ph.D. (from the Univ. of Colorado-Boulder)

Boole then shows how the algebraic –word and thought linkage occurs, e.g.

“Let it be agreed that by the combination xy – that class of things shall be represented by which the properties are simultaneously applicable. Thus, if ‘x’ alone stands for ‘white things’ and ‘y’ for sheep, then let ‘xy’ stand for ‘white sheep’. In like manner, if ‘z’ stands for ‘horned things’ then let ‘xyz’ represent ‘horned white sheep’.

Boole then considers the laws to which such symbolic combinations are subject.

“First, it is evident that the order by which two symbols are written is indifferent. The expressions xy and yx equally represent that class of things to the several members of which the names or descriptions x and y are together applicable. Hence we have:
xy = yx

There may be a difference as to the order in which the conception is formed but there is none as to the individual things which are comprehended under it”
Boole is also emphatic about qualities and discerning them:

Boole, continuing in his Chapter II, now makes some extraordinary associations and conclusions which are important to follow. This section again deals with the use of letter symbols (e.g. x, y, z etc.) and their meaning. As he notes the following is a “law of thought and not a law of things”:
He writes:
“We are permitted, therefore, to employ the symbols x, y, z etc. in the place of the substantives, adjectives and descriptive phrases subject to the rule of interpretation, that any expression in which several of these symbols are written together shall represent all the objects or individuals to which their several meanings are together applicable, and to the law that the order in which the symbols succeed each other is indifferent”

Recall from the earlier symbolic example that:  xy denotes white sheep, but also yx denotes white sheep, since the order of the symbol doesn’t alter the meaning of the conception (combination). Thus: xy = yx
Boole is careful to emphasize that while this illustrates the commutative law of algebra, it is not in the sense of actual algebraic multiplication but rather a process of “logical combination” by which xy means a definite conception.
More abstractly, he allows that (since the logic is commutative for the conception) we need not use either xy or yx but simply ‘x’.
“As the combination of two literal symbols xy expresses the whole of that class of objects to which the names or qualities represented by x and y are together applicable, it follows that the two symbols have exactly the same signification, their combination expresses no more than either of the symbols taken alone would do. In such case we should therefore have xy = x

As y, however, is supposed to have the same meaning as x we may replace it in the above equation with x and we thus get:

Again, I have to interject here that we are not seeing any violations of known mathematics, but rather the outcome for a logical process of combination. Boole is simply compacting and simplifying notation for logical combinatorial operations, much like the inventors of tensor calculus did with their notation.
So what is Boole getting at? Is he really and truly saying we can let ‘x’ denote ‘white sheep’ or ‘good people’ instead of writing xy?
Yes, and he confirms it:
“The reader must bear in mind that although the symbols x and y in the examples previously formed received significations different from each other, nothing prevents us from attributing to them precisely the same signification. It is evident that the more nearly their actual significations approach to each other, the more nearly does the class of things denoted by the combination xy approach to identity with the class denoted by x, as well as with the class denoted by y. The case supposed in the demonstration of the equation: xx= x is that of absolute identity of meaning”

Boole, obviously not sure if his readers have grasped this, goes on to clarify using examples:
“The law which it (equation) expresses is practically exemplified in language. To say ‘good, good’ in relation to any subject, though a cumbrous and useless pleonasm, is the same as to say ‘good’. Thus, ‘good good men’ is equivalent to ‘good men’”

Boole’s next law is prefaced:
“Signs of those mental operations where we collect parts into a whole, or separate a whole into parts”

He illustrates this using the example of letting x = women and y = men
So all (adult) people living on Earth is:
x + y = y + x
In this case, the signification is not only by quality (sex) but numerical as well, since the total of men plus women (x + y) must equal the total of adults living on Earth. Less generalized operations can also apply, for example – let ‘z’ denote European, then:
z(x + y) = zx + zy
and we have the juxtaposition of two literal symbols to represent their algebraic product.

Moving on, we go to Boole’s next class of laws under the header:
“Signs by which relation is expressed, and by which we form propositions”

And the law follows via two simple axioms:
"1st. If equal things are added to equal things, the whole are equal.

2nd. If equal things are taken from equal things, the remainders are equal.  Hence, we may add or subtract equations, and employ the rule of transposition as in common algebra.”

It should not surprise us on reading these laws that many have made their way - in different forms - into standard texts on logic.

The Laws of Thought, by George Boole - Auburn University ...

Posted by Copernicus at 7:57 AM