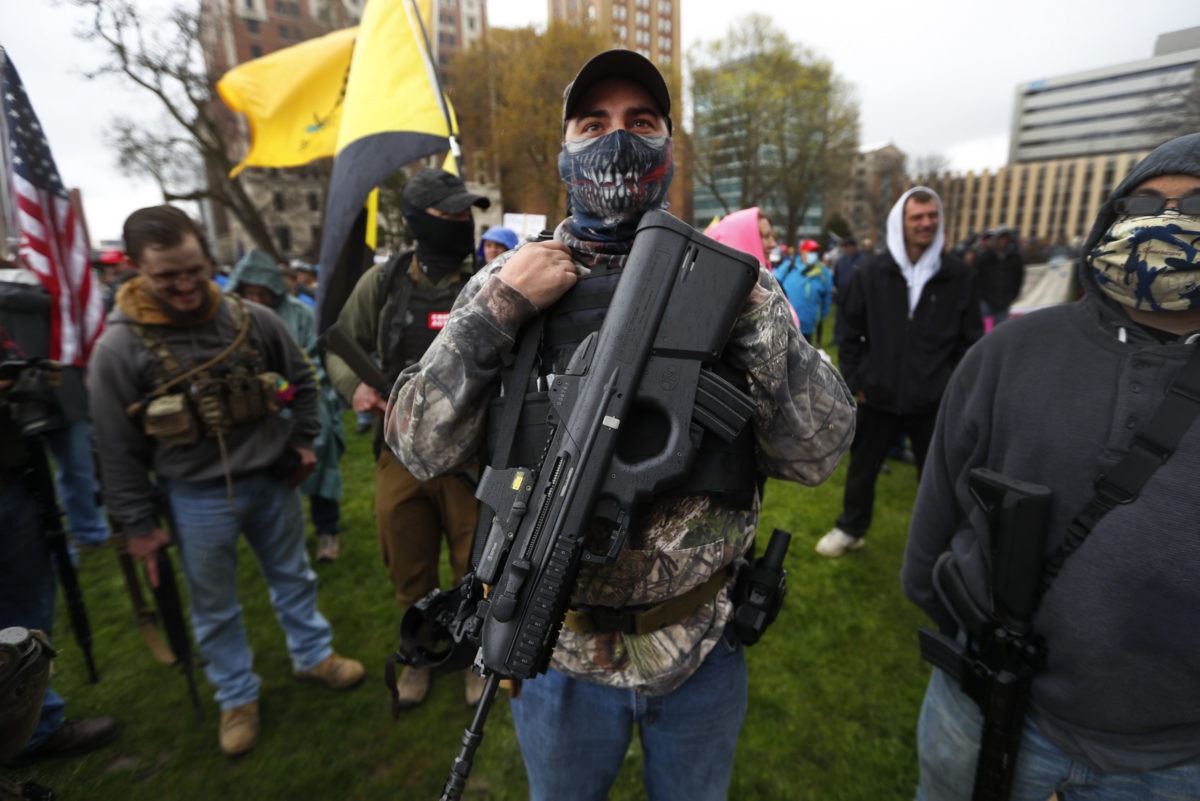 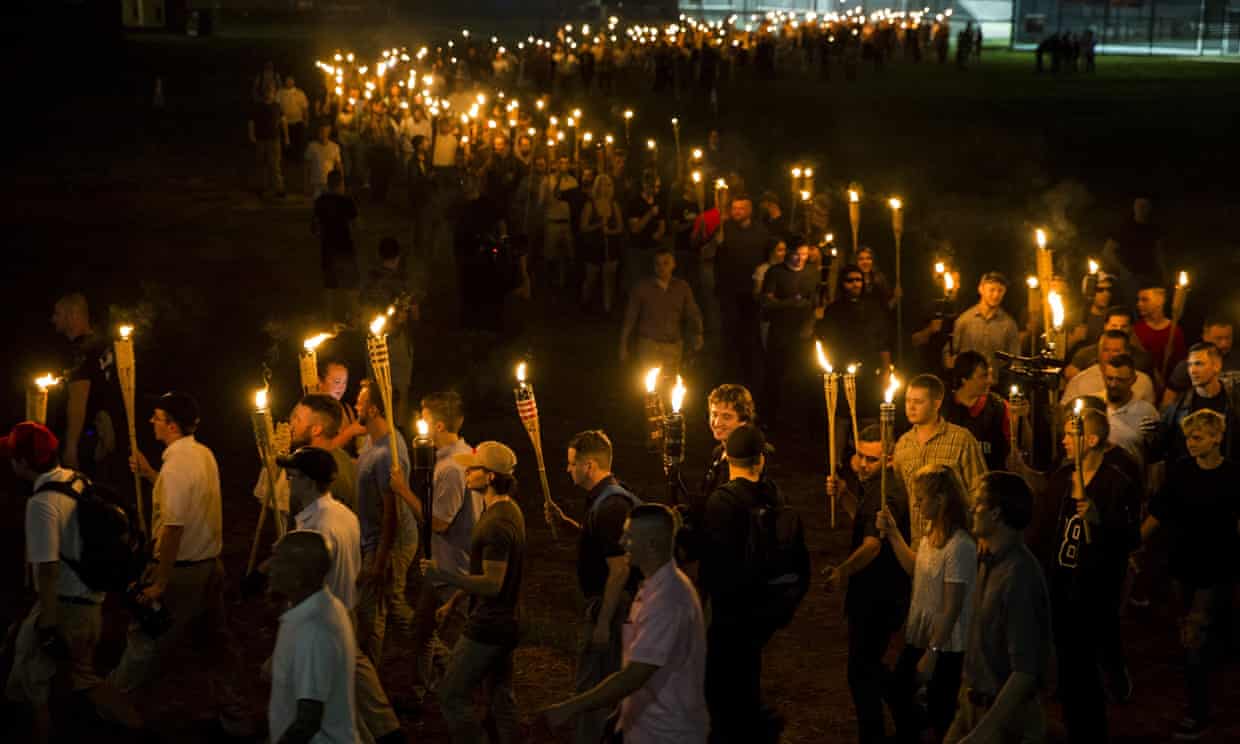 THESE are the renegades the Feds ought to be looking at as chaos is unleashed in American cities. These Right wing racist savages - lower image from Charlottesville in Aug. 2017,  chanting "Jews will not replace us!"-  have been itching to start a race war since Charlottesville and before.

One can understand why Janice would be suspicious after watching AG Bill Barr's performance two nights ago, blabbering about the violence accompanying many of the George Floyd protests: "In many cases it appears the violence is driven by anarchic and left wing extremist groups".  Unwilling to pin the tail on the actual messengers of mayhem:  right wing extremists using the upheaval, chaos and violence to hijack the peaceful protests for their own ends.    With the reporting by Vice News overnight, that:

"Far Right extremists are hoping to turn the George Floyd protests into a new Civil War."

Janice had her first evidence that her suspicions were correct, and it is the Right and its dregs (e.g. from 4chan, 8chan, Boogaloo Bois, militias  etc.- such as stormed the Minnesota state house two months ago) behind all the havoc and using the civil protests as a "human shield". I agree with her totally and also that the Swine -in -chief and his toady Barr are trying to callously exploit these events to propound a "law and order" meme to help Trump get re-elected.

And what do we find Trump doing in the midst of this national agony, with millions of citizens suffering -   over 104,000 deaths from the pandemic, 40 million unemployed, no more stimulus money and facing home evictions in a month?  Is he trying to assuage the pain and bring the country together? Hell no, he's acting the part of the vicious, vile, verminous rat he is, e.g


Firing off a series of tweets at Minnesota's response, vowing "shootings" will soon be done, ridiculing protesters outside his gated mansion at the White House,  and warning them that "vicious dogs will be released."  Thereby putting himself in the same role as the infamous AL sheriff Bull Connor-   who used fire hoses and vicious dogs on peaceful marching men, women and children in Birmingham over 50 years ago.   Only this time going one better than Connor and bragging "there will be some of the most ominous weapons ever seen" - i.e. if protesters attempt to breach the WH fence to get at him.  See also:

America is at a low ebb, shaken by multiple blows, and Trump adds to the distress


Janice is also aware, of course, of German history and how -when Hitler and the Nazis came to power - they had blamed "Jews, leftists, socialists and unions" for  ongoing civil unrest and violent mayhem and riots that struck German cities in the waning days of the Weimar Republic.  But most of those were incited by Hitler's S.A. (Sturm Abteilung) terror squads.

Ian Kershaw in his magnificent account of Hitler’s rise to power (‘Hitler Nemesis’) noted that Germany's 1930-31 Weimar Republic constituted a weak democracy which had little or no control over the most radical Rightists, especially Hitler’s NSDAP party. They would regularly beat Marxists, socialists, and any leftists on the streets while holding up signs that read: “Tot dem Marxem!” (Death to Marxists!)  (Recall on Thursday, Trump himself Tweeted out a video of a supporter saying, “The only good Democrat is a dead Democrat.”)

My good fortune has been that on two occasions - one in August of 1978, the other in May of 1985-   I was able to meet and talk with actual flesh and blood Germans from the WWII era: one who had been a member of Hitler Youth (forced to at the point of a gun to his mother's head), and two others who had fought for the most fearsome army on the continent - the German Wehrmacht. At different times, they used their own photographs, films and archives to show me just what Hitler and Nazis were about. Looking back on the content of those archival films I see the same echoes now in our present condition, including mass unemployment, riots, and mayhem.

"But if America feels like a tinderbox at the moment, it’s not just because of pressure coming from the dispossessed. On Wednesday, the journalists Robert Evans and Jason Wilson published a fascinating and disturbing look at the “boogaloo” movement — “an extremely online update of the militia movement” — on the investigative website Bellingcat. “The ‘boogaloo Bois’ expect, even hope, that the warmer weather will bring armed confrontations with law enforcement, and will build momentum towards a new civil war in the United States,” Evans and Wilson write. They add, “In a divided, destabilized post-coronavirus landscape, they could well contribute to widespread violence in the streets of American cities.”

This is exactly what we are seeing now.  Echoing these insights, Mia Bloom on her blog Justsecurity notes:

"The accelerationists, if you have never heard the term, are an extreme subset of white nationalism whose goal is to bring about chaos and destruction. The basic tenet of accelerationism argues that since Western governments are inherently corrupt, the best (and only) thing supremacists can do is to accelerate the end of society by sowing chaos and aggravating political tensions. “Accelerationist ideas have been cited in mass shooters’ manifestos — explicitly, in the case of the New Zealand killer — and are frequently referenced in white supremacist web forums and chat rooms,” Zack Beauchamp explained.


White Supremacists pretending to host a protest to honor George Floyd on Facebook to whip up violence in San Diego were posted on the BLMSD social media warning people not to go and that it was a white supremacist organized rally. People attending demonstrations remarked on the fact that the demographics were wrong, in places like Oakland where the majority of the destruction was perpetrated by young Caucasian men has inspired not just people on social media but reporting in the mainstream"
Of course we also cannot ignore the possibility that agent provocateurs could be at work as well, such as from within the ranks of the police assigned to the protests.  (As pointed out by Joy Reid this morning in relation to an incident in NYC).  We also read from Mia Bloom's account:

"Experts on political violence (and not just Qanon conspiracy theorists) shared stories on social media that the May 27 looting and arson at AutoZone by an unidentified man in a gas mask carrying an open umbrella (dubbed #umbrellaman) was not necessarily a protester but could be an agent provocateur or member of the police. In video posted to YouTube, while this man smashed windows with a hammer, protesters at the scene accused him of being an outsider and began to film him.


According to reporting in the Atlanta Journal-Constitution, “The man’s actions were so odd that other rioters in the area paused their own protests to call him out and began filming. “Are you a f—ing cop?” someone else can be heard yelling to the man as he disappeared from view.”
As in the 1960s it appears we are faced with fakes, double fakes, insidious skullduggery and the hijacking of protests  by those who firmly believe "the Great Replacement"  Rightist codswallop.  All this to aid their agenda by compounding violence and deflecting attention. The FBI's Cointelpro  comes to mind, which infiltrated left groups from 1956- 1971 and in many cases saw agents inciting incidents in the midst of normally lawful protests, like against the Vietnam War.  In one secret 1968 memo - since exposed via FOIA release-  Hoover made no bones about the motivation:
"To expose, disrupt and otherwise neutralize the activities of various New Left organizations. We must frustrate every effort of these groups and individuals to consolidate their forces or to recruit new or faithful adherents.”
It very much appears that Trump and Barr are resorting to the same tactics now, and Trump himself keeps pouring more gasoline on the simmering fires that could explode if we are not careful - as well as perceptive.  A lesson the Weimar Germans learned too late.

Update: Further exhibiting his full blown psychosis, ignorance and incompetence in this crisis, Dotard fulminated that "we will be designating ANTIFA as a Terrorist Organization".   To jog memories, this was the activist group -  NOT an organization with a clear structure that can be penalized under law- that came to the aid  of numerous Charlottesville citizens in August, 2017.  As I wrote in my Aug. 16 post:

Rev. Traci Blackmon  related on MSNBC  how African-Americans singing a hymn  near an entrance in Emancipation Park were set upon by the White racist loons and goons who proceeded to beat and mace them. As Rev. Blackmon put it, "the only thing that saved them was the intervention of Antifa and other protesters" - one of whom drove the racist louts back using a spray can and a match - effectively engineering a mini flame thrower.

One can surmise from this that if Dotard Donnie Bonespurs had his way, those elderly black Americans singing their hymns would have been bashed senseless.  Much like this racist loon did to one Antifa member trying to save a fellow  protester that day:

And:
Peace & Justice
Chaos Does Not Have to Destroy Us


How Much Violence and Destruction is Enough for Depraved American Leaders and Their Subjects?


Eruptions of Rage in Minneapolis and across the US over the Cop Murder of George Floyd are Uprisings, Not 'Riots'
by Dave Lindorff | May 31, 2020 - 5:09am | permalink 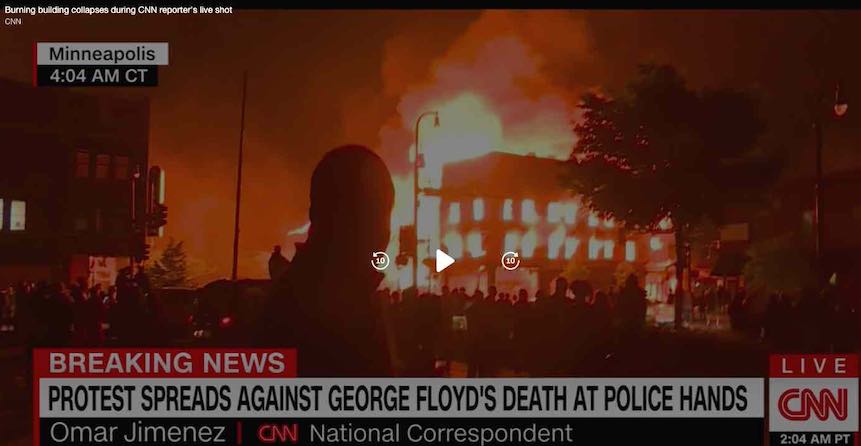