Sorry, A Mass Murdering Kid Merits Time Behind Bars - And Not Merely "Therapy" 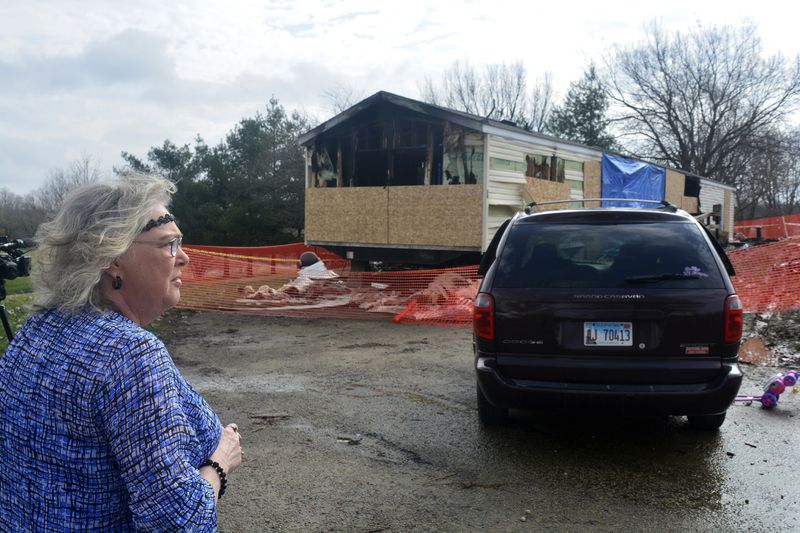 The burned out domecile where 5 innocents were slaughtered by a 9 year old fiend, now being given cover for his crime by sappy,  sentimentalist "legal experts".

It's incredible to behold the parade of hand wringing,  "legal expert"  nincompoops caterwauling about a 9 year old arsonist having to face trial for his crime at Timberline mobile home park in Illinois.   As per the decision yesterday, the kid was charged with two counts of arson and one count of aggravated arson, the local paper, The Peoria  Journal Star reported.

Now, for the addle- pated, soft -hearted, bleating nincompoops.  For example, Betsy Clark, the president of Juvenile Justice Initiative, blasted the decision to charge "such a young child"  (nee, bad seed)  with murder.  According to Betsy:

"The charges are completely out of line, given everything we have learned ... especially about the brain development of children."

Please, spare me the BS, lady.  In Barbados kids as young as nine or ten have been thrashed with the Tamarind rod for crimes as tame as petty theft, and then locked up in the juvenile wing at Glendairy. If found insane, the only other feasible excuse - including for a brutal assault on an oldster- he'd end up in Jenkins Psychiatric Hospital. He'd be confined 24/7 to an 8 x 10 room with only a rubber mattress to sleep on and given largactyl and ECT three times a day.

Bajans were sensible enough to grasp you didn't cry or moan for such reprobates, you saved your sympathy for their victims - often 70, 80 year old grannies laid up with busted skulls and facing long, difficult recoveries..

The "brain development" argument only works if the kid is retarded and this kid wasn't - by all accounts.  Hence, he must face the music for slaughtering 5 family members by setting a fire while they slept. Why? Because as we learned in parochial school, once you hit the age of seven you are at the age of reason and can be held responsible for your actions.

As one nun, Sr. Vivina, put it to her religion class when I attended St. Leo's school in Milwaukee:

"Yes, if a boy of seven commits a serious (mortal) sin, he can be sent to hell if he then dies."

Case closed, I'd say.  Certainly, if the heavenly Archons could pass such a judgment on a young delinquent their earthly counterparts can do no less in an earthly justice mode.  But you'd never know that to read some of the bollocks reactions to this case.

Horse manure!  Any non-retarded kid would know that, I knew it from the age of 6.   How? Like any kid with a grain of sense I'd stay up late and hide on Xmas eve whereupon I'd see my folks putting the gifts under the tree. No Santa!   It's no wonder we're now saddled with a criminal occupant of the White House like Trump given this soft on kid crime attitude in play here.

Hell, if Trump had been sentenced to a year in Rikers  Island at the age of 14 - after he was found to have used modified jack knives on alley cats- we'd likely not have to be impeaching his sorry ass now.  Because he'd have become a full time criminal and jailbird, as opposed to coming out virtually unscathed from a NY Military School..

Anyway, this meathead Kostopoulos, then added:

"They don't know people die and don't come back to life."

Bullshit!  I knew when my cousin Lois Jean  died of leukemia at age 6 - same age as me  -  she was not coming back to life.  Again, if the kid is not retarded it's a no- brainer. Stop making lame excuses for this pint sized murderer.

The fool also said, presumably with a straight face.

Of course they can, you mindless ninny! Just as they can form intent to steal a candy bar from the grocery store, or lie to their parents about where they got that brand new jack knife.  And as we learned:

So I'd say case closed.

All these soft brained numskulls can do is make absurd excuses while five innocent victims were reduced to  ashes by this little monster punk.

Sorry, but I am not prepared to let him off.  At the minimum he ought to be in Juvenile detention until the age of 21, and then face hard prison time - at least ten years.  Give him plenty of time to think about his "mistake".  Wifey concurs with this "harsh" judgment, asserting he's "too dangerous to be allowed to just walk".  Got that,  Ms. Clark,  and your easy going, "juvenile justice" confederates?

In any case he is still liable for a tap on the wrist sentence.

If convicted, such a mass murdering 9 year old (in his state of IL)  could be placed on probation for at least five years but not beyond the age of 21,   This according to State attorney Greg Minger.

Oh, he will likely get therapy too.

Sounds like a pretty tame sentence for butchering five people!

Oh, and before we get too inured to the crime out of misplaced, sappy sentimentality - with more sob stories about the poor little killer-   let's take the time to recall all the lives he snuffed out with his craven, brutal stunt.  Those included  his two infant siblings, 2-year old cousin and grand mother.  If you want to shed tears shed them for the victims not this little bad seed imp who even now is likely enjoying how will get away with murder - mass murder.

At least State Attorney Minger grasped the kid couldn't be allowed to walk away. As he put it:

“It was a heavy decision.  It’s a tragedy, but at the end of the day, it’s charging a very young person with one of the most serious crimes we have. But I just think it needs to be done at this point, for finality.”
Posted by Copernicus at 8:04 AM