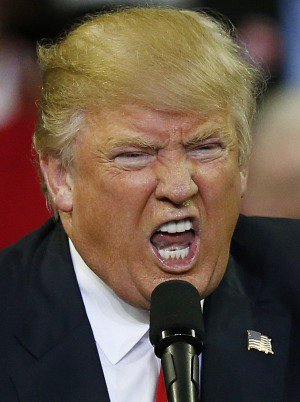 Wonder of wonders, President Donald J. Trump, aka Capt. Bonespurs,  said on Saturday that he would no longer hold next year’s Group of 7 meeting at his luxury golf club near Miami, a swift reversal after two days of intense criticism over awarding his family company a major diplomatic event.

Did Donnie Bonespurs do this out of a sober acknowledgement he was violating the domestic emoluments clause against presidential self- dealing?  I.e. selecting his own property as the venue for a major diplomatic event, and thus a "decision unprecedented in modern American politics with a president awarding himself a massive contract." (WaPo, Saturday).

Of course not. This pinhead spouted about the "phony emoluments clause".  What do you expect from a dolt  that  has never read the Constitution and struggles with a 'Garfield' comic?  All Dotard knows is self dealing and hence actively embraces his own narcissism directed to self- enrichment. That is the sum and substance of his miserable existence.  If he can't make a deal that benefits himself he wants no part of it.   And bear in mind, like most grifters and criminal con men his "deals" are always inflated, exaggerated.  An AP examination of Trump's Twitter feed turned up 1,200 mentions of the words "biggest,", "smartest",  and "best".  (Denver Post, Oct. 20, p. 7A,  'With Trump It's Always 'The Art of the Big Deal'")  In his most recent transgression Trump claimed a crowd of 30,000 for a rally crowd in Dallas.  The Dallas Fire-Rescue Dept. made an actual count of 18,500 or below the 20,000 capacity of the American Airlines Center and 38.3 percent less than Trump claimed.

Why does this deranged man-baby employ such excess claims, hell outright LIES? Because like all practicing con men he understands that employing them is the best hook to sucker the gullible, lower IQ segment of the populace.  Thus, rather than offering solace to the Kurds slaughtered in the wake of his unseemly withdrawal of U.S. troops in N. Iraq, he chose to brag on his "deal"  as a "great day for civilization".  In fact, it was among the worst, and put a rubber stamp on allies' justified suspicion of the U.S. as credible partner in most global initiatives.

But as odious as Trump's withdrawal from Syria, it was not an impeachable offense.  However, his self- dealing to enrich himself via his Doral resort was.  As blogger Robert Weissman put it on smirkingchimp.com:

"President Donald Trump no longer sees fit even to pretend that he is constrained by the law or the U.S. Constitution. It’s hard to imagine a more blatant violation of the Constitution’s anti-corruption provisions than the president steering foreign governments to stay at his luxury resort.."

Nevertheless it took a firestorm of outrage to get  him to retract his decision, and even then it was done grudgingly and rife with serial insults and complaints at any critics.

Trump wrote on Twitter  over the weekend, interspersing one tweet with the usual hyperbole, exaggerations and BS:

“I thought I was doing something very good for our country by using Trump National Doral, in Miami, for hosting the G-7 leaders.  It is  big, grand, on hundreds of acres, next to MIAMI INTERNATIONAL AIRPORT, has tremendous ballrooms and meeting rooms and each delegation would have ...its own 50 to 70 unit building.  Would set up better than other alternatives."

Let's pause here to note this is all horse manure   As Chris Hayes' guests pointed out on 'All In' Thursday, all the costs vis-a-vis Trump's Doral resort are already "sunk" - meaning underwater. In debt up to Miami's tallest condo. The Doral has struggled financially since the Trump family bought the resort out of bankruptcy in 2012, reportedly paying $150 million for the property. More than $100 million in loans to help finance the project came from Deutsche Bank. The property itself - as noted by Hayes -  has also been plagued with "flying vermin"  and had some not too good inspection reports of its facilities.

Given the conditions and  debt status at Doral,  having hundreds of  personnel from G7 advance teams first arrive to check it out and then return in June with their full delegations,  would merely provide a rescue for Trump to dig his sorry ass out of a financial hole. Problem is that G7 bunch would land in the midst of Miami's worst mosquito season - as noted by Hayes' guest Natasha Bertrand.  So, Trump isn't doing any "good" other for himself.  And as Ms. Bertrand also agreed,  any number of other places would be far superior alternatives.

Trump then carried on in his loopy rant tweet:

"I announced I would be willing to do it at no profit, or if legally possible at ZERO COST to the USA. But, as usual, the Hostile Media & Democrat partners went CRAZY!”

Ok, let's back up again to shovel more horse shit before moving on.  As Bertrand also reminded viewers there is no way profits would not accrue from the choice of the Trump dump. Especially as the arriving dignitaries would need several helipads - likely provided on the golf course. After the conference the helipads would then need to be removed and the golf course restored - all at cost to U.S. taxpayers.   Far from "going crazy" too many realized the fell, unconstitutional nature of Dotard's proposal and took him to task for it. Democrats (and many newspaper editors, e.g. The Denver Post)  immediately portrayed the plan as a blatant act of self-dealing corruption, and ethics lawyers said payments from the visiting delegations could violate the emoluments clause of the Constitution, which forbids the president from accepting gifts and funding from foreign governments.

Democrats in the House and Senate - to their credit- quickly introduced legislation intended to block the use of the Doral, a bill they called “Trump’s Heist Undermines the G7,” or the THUG  Act. The measure would have blocked the use of federal funds for the Group of 7 if the event were held at the Doral.

The one who is crazy then, is Trump - for not grasping that is how his wacky nonsense would be received.

The fact this deranged  asswipe and certifiable moron could even be serious enough to write this claptrap shows he belongs in a straitjacket.  Do the country a favor? By letting foreign nationals stay at his flea and bed bug, mosquito -ridden dump that passes as a "resort"?  And then making the dignitaries pay for the privilege - to line his own pockets, of course.  (But one wonders if he'd pay their medical bills if they contracted dengue fever from a mosquito bite)

Trump added: “Therefore, based on both Media & Democrat Crazed and Irrational Hostility, we will no longer consider Trump National Doral, Miami, as the Host Site for the G-7 in 2020.”

In the wake of what we've seen the past week, let us accept as a proposition that things will only get worse in the next year - especially with impeachment hanging over Trump's head.   As NY Times political columnist Peter Wehner put it on 'Last Word' Friday night:

"Republicans to whom I've spoken have known from the start that this is a person who's really problematic, psychologically unwell. At the beginning it was wishful thinking that they could contain or control him... What's happening now is Trump's pathologies are getting worse  and the guardrails are disappearing. So what we're seeing now is the worst of Trump, but it's going to get worse going forward."

The problem is that if his Senate cult followers then fail to remove him, he will become vastly more emboldened and make even more atrocious decisions- say than the Kurd betrayal, the Ukraine shake down call to dig dirt on political opponents, and the Doral G-7 self dealing .  As WaPo columnist Ruth Marcus said on 'Last Word' Friday night, when asked if the "dam" would finally break in the wake of the week's events:

"No. The Republican lawmakers will just stick with Trump. They have a 'me first' approach and fear Trump's base and being primaried. Until Republican voters turn against Trump it is very very dangerous - no matter what they privately think, say about Trump giving himself this big contract, or Trump in Syria. So they're not going to break with him in public."

This fear is also what led HBO ('Real Time') comedian Bill Maher to warn at the end of September of the potential political ramifications of pursuing Trump's impeachment, but failing to remove him. As he observed:

"If we do this, the country is going to be paralyzed.  I'm not saying don't. ... It's going to be paralyzed for a very long time, and all of the oxygen in the room will be taken by this,"
But then voicing the much more ominous danger of the GOP -dominated Senate failing to do its constitutional duty to remove the thug (which requires a two-thirds majority, or 67 votes.)  So what other alternative is there, short of invoking the 25th amendment (even more improbable), or Trump losing the election next year.? (Still not a slam dunk by any means.)  And we know how the Trump cabal will stoke the "fear the socialists" meme.
By Friday night, Maher had conceived of potentially the only real solution to eliminate the orange fungal parasite and blight on the Republic.    He offered to pay  $1 million for the orange mold to leave the office. (Which in truth he ought to seriously consider after Admiral William H. McRaven torched the traitor in a NY Times op ed and accused him of being a "threat to the Republic".)

Maher, a long-standing Dotard critic who actually got a Trump-filed  lawsuit tossed out (after he vowed he could prove Trump was the spawn of an Orangutan) said:
"Just take my check for $1 million. I bet I could get another 1,000 people just from here to the beach — including Malibu, of course — who would pay that much to see you resign,"
Bill  concluded, "Mr. President, it is really very simple. You love money. We hate you."
At first blush I agree with Maher this plan could work - knowing Trump's mendacious nature. But is $1 million enough to get Trump to move his fat ass out of the Oval Office for good?  I doubt it. I suspect it would take at least $100 million - and I doubt all the actors' contributions in Hollywood would make that threshold.   Besides, most would- be contributors would justifiably worry that this slimeball would renege. After all, look how he stabbed the Kurds in the back barely a week ago.  He'd probably do the same for this effort then holler at one of his rallies: "Ya see what I did to them dumb liberals and Dems! I stiffed 'em good!"

So we are stuck with hoping, as Marcus went on to say, that the polls favoring Trump's impeachment and removal hit at least 52-55 % of Republican voters to force the Repuke Senators to have their 'come to Jesus' moment and ditch the Dotard.

Either  that, or find a candidate who can beat him next year in the general.

Posted by Copernicus at 9:33 AM

Perhaps a GoFundMe site to raise money for Trump to resign. That would really be a struggle deciding whether to donate.