Planned Parenthood Founder Margaret Sanger In League With White Nationalism? Only A Hack Like WSJ's William McGurn Would Push That 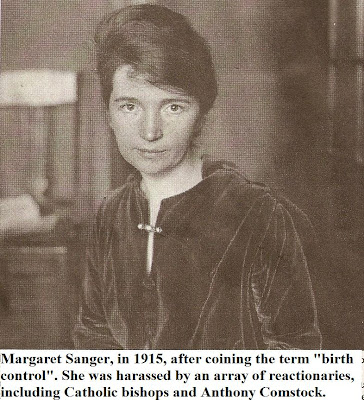 What to make of WSJ columnist William McGurn's claims in his Sept. 1 op-ed 'White Supremacy and Abortion', p. 15, in which he writes:
"Black pro-lifers are treated as if they don't exist. Quick example: how many outlets even reported the National Day of Mourning, with a prayer service for all the black lives lost to abortion?"
Seriously, does McGurn even care? Does he even give a shit apart from being able to employ reverse identity politics to spin his bunkum in an effort to get more blacks to side with the Right?  After all, we're well aware -  from a recent NY Review of Books piece ('The Culmination of Republican Decay' (Oct. 10, p. 10) by Sean Wilentz,   and Tim Alberta's 'American Carnage'-   that "Republicans were driven crazy over issues to do with race based on 'Obama's perceived exploitation of racially driven politics."
And what triggered that craziness?  Well, "Obama's emotional response to the murder of Trayvon Martin".  In other words, Obama rendering a human, compassionate response to a black kid's murder sent the Reepos' brains off the edge.  How to get back? Well, dig up the old eugenics bogey and pin that tail on those like Margaret Sanger, who did her utmost to ensure all poor women - white or black - were not saddled with more kids than they could support.
And this is relevant because in many other McGurn screeds we see him ripping poor and working class folk for not doing more to pull themselves up by their own bootstraps as opposed to depending on food stamps, Medicaid or other government support.  As for the question at the end of his quote above, why would national outlets pander to a PR stunt which is what that 'national day of mourning' was.  As a reality check on this bullshit we can cite Ethics prof Cheryl Mendelson's observation - from her book, 'The Good Life' (p. 159) regarding nature's rate of disposing of fetuses:


"Nature sloughs off early pregnancies at a high rate and we do not hold funerals for these embryos and early fetuses.  As many as 60 to 70 percent of fertilized eggs are lost overall, usually silently - without anyone ever knowing fertilization took place.

Up to 15 percent of known pregnancies miscarry in the first trimester. Were we to take seriously the morbid pseudo-moralism ... we would recognize these countless millions of miscarried embryos and fetuses as lost lives..."
In other words, each day there's a still birth or other untoward natural event  resulting in a fetus' termination - if people really cared -  we'd see a full- on funeral, burial service, even a memorial.   But we don't.  Why not? Because nature is "sloughing off"  early pregnancies at a rate at which no sane person can keep up. And in addition, these naturally -aborted entities are not regarded as full human persons.  Nor should they be.  Recall, as Antony Flew once noted, this is the genetic fallacy, basically like asserting an acorn is an oak tree because it is going to become such.

But those like McGurn keep beating the drum of pseudo outrage because they want poor black women to feel guilt at having an abortion.  Oh, and thereby making a concrete effort to stave off having to access the government benefits like food stamps - which actions McGurn also condemns!
So no surprise McGurn would also turn his sights on Margaret Sanger (ibid.) intimating she'd possibly elicit the black pro-lifers to believe she "wanted to exterminate the Negro population" at the time.   This, given:
"It was Planned Parenthood founder Margaret Sanger, who in the Negro Project - started a campaign to get African Americans to have fewer children".

An evil, nefarious plot? Hell no!  Sanger was simply percipient enough to see how African -Americans were being held down economically by a white capitalist overclass, and prevented from getting livable wages.  Wages - as well as decent housing - that would have delivered a secure financial foothold. In this setting, the absence of birth control leading to 6, 7 and even 8 or more kids, was a virtual death sentence in Whitey America.   At the very least it was a condemnation to endless indignity,  scraping from hand to mouth, beggary and early demise - physical and mental.  There were no government benefits that could be effectively summoned at that time, whether food stamps or Medicaid, and it was long before the era of Affirmative Action.  So, minus the economic leveraging via fewer births (birth control) African-Americans remained at perpetual disadvantage.

As for the "Negro Project",  we learn this from a piece in Rewire News e.g.

"In her seminal book Killing the Black Body, Dorothy Roberts points out that leaders in the Black community actually welcomed Sanger’s birth control agenda in the 1930s, and even criticized it for not going far enough to serve Black people.
W. E. B. Du Bois, who was one of the first Black leaders to publicly support birth control and who worked closely with Sanger to advocate for it, even serving on the board of a clinic that Sanger opened up in Harlem, criticized the wider birth control movement because of its failure to address Black people’s needs as well."
Further and most germane to McGurn's agenda:

'The Negro Project had nothing to do with some nefarious plot to exterminate Black people or to “sterilize unknowing Black women,” as claimed by BlackGenocide.org—which is a widely read website seemingly dedicated to spreading false information about Margaret Sanger and Planned Parenthood.


Rather, the Negro Project was a concerted effort by Sanger and Black community leaders to bring birth control to the South in a way that would assuage the deep-seated fears of Black birth control opponents like Marcus Garvey, who believed that the use of birth control in the Black community was tantamount to Black genocide.
Many opponents of Planned Parenthood purposefully obfuscate this history in order to paint Sanger, and in turn Planned Parenthood itself, as spearheading a plot to kill off Black people."


Thus,  American women  - black and white - owe Margaret Sanger a debt of gratitude for providing the future basis for a choice NOT to remain barefoot, poor and pregnant.  While we're at it, let's point out that Sanger was actually anti-abortion. As noted from the Rewire article:

"Sanger opposed abortion. She believed it to be a barbaric practice. In her own words, “[a]lthough abortion may be resorted to in order to save the life of the mother, the practice of it merely for limitation of offspring is dangerous and vicious.” Her views are, ironically, in keeping with the views of many of the anti-choicers who malign and distort her legacy. In fact, Planned Parenthood did not even begin performing abortions until after 1973, when the U.S. Supreme Court’s decision in Roe v. Wade legalized the practice."

Of course, distortion artists like William McGurn would always prefer lies and misrepresentation to potential female liberation, because, well... he's a rich white man.  A white man with no principles or ethics who in his piece attempts to elide those like Margaret Sanger, abortion providers, birth control providers, with white nationalist scum.
The choicest remark at all McGurn leaves to the end:
"But no pro lifer ever said life was easy. We say life is beautiful!"
Yeppers, so long as you and your capitalist ilk don't have to raise taxes to provide food stamps, Medicaid or even child care - to help those poor women who actually DO  give birth.  In other words, McGurn's bandwagon is fully aboard to defend the rights of the unborn.  Just don't ask them to do anything for those already born! They are on their own in McGurn's 'dog eat dog'  world.

"William McGurn's description of Planned Parenthood founder Margaret Sanger's  'Negro project' is callous and incorrect. A full reading of Sanger's leter about the project reveals her outlining the important role black doctors and nurses serve to calm concerns about eugenics, not to promote it.  Planned Parenthood denounces eugenics because we believe every person - regardless of race or income - should have the freedom to make their own decisions about their body.

Framing access to reproductive health care and bodily autonomy as eugenics exposes a fundamental misunderstanding of the racialized gender oppression on which anti-abortionists stand. The truth is that the anti-abortion movement was born out of racist and xenophobic concerns about the falling white birth rate- which you still hear in white supremacist rhetoric.

We stand with black women and refuse to cower to the misogny and white supremacy that seeks to deny autonomy and access to the full spectrum of reproductive health care, including abortion."
See also:
Taxes | Wealth Inequality
The Wealthiest Americans Haven’t Paid Their Fair Share in Decades
Posted by Copernicus at 9:20 AM