Yeah, Kids Are Entitled To Be Heard - Barely! 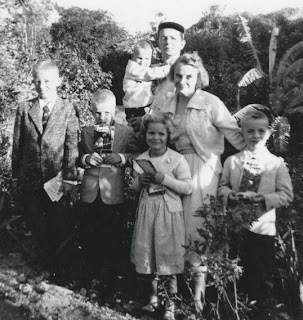 December, 1957, near Everglades National Park. We could no more decide where to go to on a family vacation than we could be given the checkbook to make out checks for whatever we wanted.

The WSJ Sunday Review article ('Children Should Be Heard But Only So Much', p. C3, by Jennifer Breheny Wallace) definitely merits attention by the "Generation Z" and similar parents who are convinced they were put on earth to satisfy their kids' every whim and be their perpetual pals. In the 50s such a thought would have been scorned from all quarters, and kids were "to be seen and not heard."

- Allowing a 6-year old daughter to approve a NYC apartment, not completing the deal until she gave it her thumbs up

- Giving their kids final decision on where to spend the family vacation.

More astounding: In a recent National Retail Federation survey of 1,000 parents of Gen Z'ers "67 percent said they solicit their child's opinion before making family purchases and 59 percent said they will not buy an item unless the child approves"

My reaction? You've got to be jiving me.  If we attempted to impose a "kid" imperative concerning the destination for a holiday, or a luxury purchase, or home purchase, we'd have had our heinies handed to us by my dad. It simply wasn't on and the most substantive decisions we were allotted were reduced to: Which side of the huge backyard we wanted to weed first, or which serving on our dinner plates (calves' liver, lima beans or baked potato) we wanted to dive into first. That was it.

Ms. Wallace puts it: "When in doubt parents can ask themselves: What is my motivation behind letting my child make or influence the decision?"

To my dad, a WWII vet, there was no asking himself anything "motivational"  other than:  "Which side of his head do I put a dent in first?"  say if one of us insisted on getting an ice cream treat on the way home from the drive -in.

Some may be aghast at this "ancient" parental code, but not so fast. Dr. Richard Weissboard of the Harvard Graduate School of Education (quoted in the article) notes that when parents become too dependent on their children for closeness "it can undercut a part of the child's moral development".

It can, in fact, lead to a narcissistic or entitled kid. Also a dead kid. The classic case was 11-year old Mark Garrity Shea who mustered a test of will against his mom, Ms. Brucie Jacobs, in 2000, when the two took off for a jaunt in Botswana. Young Mark had always camped in a tent by himself in his home environs of suburban Maryland and insisted he wanted to do likewise in the Okavango bush of Botswana. After all, what young man at the age of eleven wants to sleep with mom? That's the epitome of babyness, and Mark wanted no part of it.

Mark Garrity Shea - eaten by hyenas when he insisted on having his own way in Botswana.

Had this middle class mom thought deeply about it, she'd have realized the pair were not anywhere near a Maryland camp site, but in the Odavango...one of the last real African wilderness areas left, and certainly not to be treated as a zoo. But she didn't and so allowed Mark to be in a tent sleeping by himself.

She only realized her mistake some time later, after midnight, when she heard her son's frantic screams as he was dragged away by a pack of hungry hyenas.

Some lessons are simply learned too late, and  hence are way too painful! Had the mom established the parameters of her will many years earlier - maybe as young as when Mark was two, this awful incident might never have transpired. Mark would have understood at his mom's initial 'No!' that this is what she meant and it was no use pressing or pushing her to change her mind and let him camp out alone.

But let's be clear, too many kids today are like Mark and firmly believe they rule the roost rather than their parents. And it is the parents' own fault for making them believe so.  According to studies disclosed in a 2012 WSJ piece ('A Field Guide to the Middle Class U.S. Family', p. D2, March13), this has now become the nature of the American middle class: perpetual wimps - giving in to anything their kiddies want, and worse, sometimes even acting as their slaves.

The study of interest was conducted by researchers at UCLA's Center on Everyday Lives of Families (CELF), and geared to 'in vivo' or real life observation, rather than in labs. The studies, using video cameras to record family interactions in middle class America, Samoa and Peru's Amazon, showed how widely children are treated across cultures.

In Samoa, for example, children serve food to their elders and wait patiently until these elders have had their designated selections and started eating before they eat. They can't come to a table and just lunge or grab at food like many American kids. In Peru's Amazon girls no more than 5 years of age are required to climb trees to harvest papaya, and must also help (along with the boys) to haul logs thicker than their legs to stoke fires.

In other words, these kids aren't waited on, they aren't treated like "pals" and they are not permitted to exercise their own wills other than in limited domains.

The CELF U.S. videos showed parents doing most of the house work and not asking any kids to help out - even to clean their own room. In one video scene, an 8-year old named "Ben" is shown sprawling out on a couch demanding his dad to untie his shoe, then when he does - to put the shoe back on and tie it up again. The dad complied each time like a trained chimp, whereas the first time I'd have tried a stunt like that with my own dad, he'd have asked: "WHAT did you say?" as he reached for a belt.

Thankfully, even this wimpy LA dad eventually reached his limit of being pushed when the kid then demanded the dad bring him his coat from the closet and the dad responded, "Get it yourself!" Wow! Rough, tough and hard to diaper, there!

The CELF videos trained on middle class American families also revealed that in 75% of the families, mothers  "gyrate around the house" - bouncing between kids, their homework, groceries, dinner and laundry. Is it any wonder so many American married women are totally neurotic and more than 70% can't get a decent night's sleep without a pill? Cripes!

And what about the kids in all this? You know, the same ones who at age 5 in Peru would be harvesting papaya by climbing trees and who in Samoa would be cooking AND serving the food to their elders? According to Dr Elinor Ochs, the anthropologist in charge of the CELF study (ibid.):

"The kids are oblivious to their parents' perspectives"

In other words, American middle class parents appear to be raising a bumper crop of narcissists and egomaniacs. And the likely outcome from them when they will, at some point - have to acknowledge another's will (even if it's just a demanding, no-nonsense physics teacher)? Well, either prison for antisocial behavior, or more likely, a borderline personality disorder which will follow them through life with endless altercations, job firings, divorces ....whatnot.

Or maybe, god forbid, they mutate into more Trumps or Trump-like assholes. Just what the country needs: millions of entitled little shits out to get theirs and theirs alone and screw everyone else.

Richard Weissboard  makes the point "children need to be taught to make sacrifices and not to assume that others will organize their lives around them, which can lead to entitlement".

Or, it can lead to dashed expectations and severe depression when the professor or boss lets the entitled little twit know that  his or her self priorities won't work. The homework assignment, lab or paper will still be marked with an 'F' if not delivered on time, and the boss will fire your ass if you keep showing up late and making daft excuses that order your time over the company's.

But without their charges being instilled with the importance of constraints,  parents  can also hatch reckless, moral nitwits like Obdulia Sanchez. She thought it was cool to do instagram live streaming while driving her vehicle with no hands and singing a dumb song. Until she careened off the road, killing her younger sister in the back seat. This irresponsible, entitled fool now faces twenty or so years behind bars for her stunt.

Bottom line: Kids need to have limits on their choices imposed from early, because later on - not only will teachers or their bosses be likely to impose them - but the law as well.