Let us concede we live in treacherous times for bastardized memes and subtle mind viruses to be unleashed on an unsuspecting populace, especially by those endowed with an academic cachet or more or less benign appearance. There is no doubt,  not one, that if Josef Goebbels had re-materialized at Middlebury College four months ago and brandished a thesis that Jews were inferior and hence needed to be eliminated, there'd have been an unholy outcry. And oh yeah, a lot more than screaming and pulling fire alarms would have gone on. Also that there would have been no mistaking such a screed for "free speech".  In fact, if erupted from Middlebury's students they'd have been lauded rather than now vilified for "attacking free speech" regarding Charles Murray's attempted appearance.

The screeching of most of the media - including some overpaid moron named Carl M. Cannon at 'Real Clear Politics' -e.g.

has been that the great Murray was delivered a hate -filled beat down and after all he does hold a "doctorate from MIT" and is a member of the "esteemed American Enterprise Institute".

But before our compadres on the Right do backflips in exultation at Murray's claimed respectability, let us bear in mind that the Jew-hating  Joseph Goebbels also  obtained a Doctor of Philosophy degree from the University of Heidelberg in 1921. So a doctorate is no assurance of respectability or moral probity. After all,  this eugenics -imbued mastermind of Nazi propaganda is the one who developed numerous tracts comparing Jews to vermin, paving the way for the Final solution. 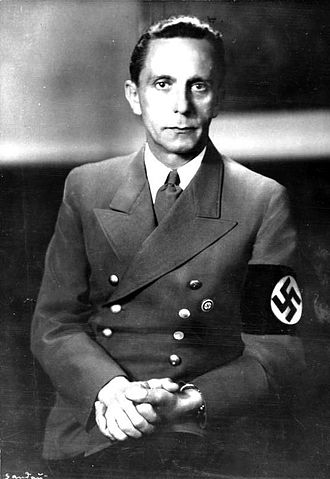 As for the American Enterprise Institute, which the ignorant hack Cannon praises, e.g. "this Washington-based think tank is devoted to 'defending human dignity, expanding human potential, and building a freer and safer world."  (sic, barf) let's not overlook the applicable facts here:

The AEI  were the ones offering scientists up to $10,000 each to write tracts and op -ed pieces denying global warming.  As reported by the UK Guardian "letters sent by the American Enterprise Institute (AEI), an ExxonMobil-funded thinktank offered the payments for articles that emphasise the shortcomings of a report from the UN's Intergovernmental Panel on Climate Change (IPCC).  Travel expenses and additional payments were also offered."

Real charming bunch of individuals devoted to "human dignity" there. They'd allow humanity the "freedom" to burn in an unbearable hothouse world - devoid of polar ice caps and glaciers, coastal cities sinking, diseases rampant-  because they've enabled liars and propagandist schmucks to brainwash people into thinking climate change is a myth or hoax.

According to The Southern Poverty Law Center (SPLC), of which I've been a member for over 15 years, Murray - like the AEI -  "advocates the total elimination of the welfare state, affirmative action and the Department of Education, arguing that public policy cannot overcome the innate deficiencies that cause unequal social and educational outcomes".

This academic reprobate's central thesis (in The Bell Curve) is that:

"the United States has experienced dysgenic pressures throughout either most of the century (the optimists) or all of the century (the pessimists). Women of all races and ethnic groups follow this pattern in similar fashion. There is some evidence that blacks and Latinos are experiencing even more severe dysgenic pressures than whites, which could lead to further divergence between whites and other groups in future generations.”"

A section that could have come straight out of Goebbel's hands.   What are Murray's "dysgenic pressures"?  They are the selection effects, factors responsible for the reduction of a population's intelligence arising from a regressive gene pool.  In this case,  because blacks and Latinos exhibit lower average I.Q.s than whites (or Orientals) they impact the aggregate gene pool adversely sending the overall intelligence lower.

Note that while Murray has loudly insisted he's not espousing eugenics, the very use of the term "dysgenic" - which recognizes negative eugenics, show that he is.

One here is led to reference Goebbel's tract (The Nazi -Sozi, 1932) cited by Konrad Heiden in his monograph The Fuehrer, :

"Certainly the Jew is also a man, but the flea is also an animal. And the other animals do not harbor and cultivate the flea but exterminate it"

To be sure, Goebbels in his tract is blunt, crude and merciless. There is no effort to disguise exactly what his eugenics theme means.  This is unlike Murray's which basically says the same thing (pertaining to Latinos and blacks),  but is couched in academic lingo (delivered in the guise of a serious academician)  to disarm any would be critics.  Thus, because Murray offers an academic patina he is to be treated respectfully and given a fair hearing for his toxic ideas, mind viruses and memes.  "Free speech", after all. But under SPLC tutelage the Middlebury students weren't fooled and were not about to confer respect, gravitas or dignity to a racist rapscallion.

"Many criticisms of The Bell Curve, most notably Charles Lane’s thorough takedown in The New York Review of Books, have pointed out that Murray’s attempts to link social inequality to genes are based on the work of explicitly racist scientists. In an afterward to the book, Murray rejects criticisms that rest on the fact that “we cite thirteen scholars who have received funding from the Pioneer Fund, founded and run ([Lane] alleged) by men who were Nazi sympathizers, eugenicists, and advocates of white racial superiority.” Murray contends that the racist pseudo-scientists he cites “are some of the most respected psychologists of our time” and that “the relationship between the founder of the Pioneer Fund and today’s Pioneer Fund is roughly analogous to that between Henry Ford and today’s Ford Foundation.”

In fact, the Pioneer Fund’s ties to eugenics and white supremacy are not nearly as historically remote as Murray would have his readers believe. The president of the Pioneer Fund at the time The Bell Curve was written was Harry Weyher, who was a personal friend of the Fund’s founder, Wickliffe Draper, and shared his supposedly archaic views on race. Just two months after the initial publication of The Bell Curve, Weyher gave an interview in which he argued, among other things, that desegregation had “wreck[ed] the school system.”

Russ Bellant, author of 'Old Nazis, The New Right And The Republican Party', South End Press, 1991) traces the current incarnation of the Pioneer Fund back to the Reagan era with the likes of Ralph Scott and Roger Pearson both of whom "received tens of thousands of dollars from the Pioneer Fund which assists researchers attempting to prove Black inferiority".

So we return to the central question: Should an idea - no matter how abhorrent and toxic  - be able to receive an unopposed hearing anywhere?  Especially at a university? And the answer now, as before  when I posted about it (Jan. 9. 2015) , is absolutely not!

As I noted then:

"There is a vast gulf between what clueless humans call "freedom of expression" and moral communication.  The key difference is that moral communication does not incite to violence, by castigating and vilifying a whole people. And yes, that means words and cartoons can act as murderous weapons! They embed themselves in the mind, especially of those already with axes to grind, and incite them to take precipitous action.

And lest we take that as a freak exception let us recall how Limbaugh once referred to Leftists as "cockroaches" e.g.


And the Nazis during the Third Reich regularly depicted the Jews in cartoons and films as "rats". E.g.

Was this free expression or free speech, given the horrific effect it had? Of course not! It was the most scurrilous, vile refuse and propaganda masquerading as speech. No form of propaganda is defensible, whether in books, film or cartoons. This is not free speech but hate speech. It defiles the user as it does the target, reducing each - via dehumanization. See the Nazi material produced on the Jews in the preceding link."

Back to the SPLC again:

"Murray and Herrnstein described Richard Lynn, whose work they relied on more than any other individual, as “a leading scholar of racial and ethnic differences.” In his many subsequent defenses of Lynn, Murray neglected to mention the many serious methodological criticisms of Lynn’s work, or his contributions to white supremacist publications including VDARE.com, American Renaissance and Mankind Quarterly, the last of which Lynn also serves on the editorial staff of.

The Bell Curve not only relied on “tainted sources” like Lynn, but is itself making a fundamentally eugenic argument. The central, and most controversial chapter of the book, focuses on the threat of “dysgenesis,” a term that Murray and Herrnstein claimed to have borrowed from population biology, but which in actuality was coined and has been used exclusively by eugenicists to describe the problem that their policy proposals were intended to fix. Dysgenesis refers to the supposed genetic deterioration of a population, but while Murray and Herrnstein wrote as though it represents mainstream science, dysgenesis is not considered to be a real phenomenon by modern evolutionary biologists. It is widely accepted only among the “scholars of racial and ethnic differences” that appear so prominently in The Bell Curve’s bibliography."

In other words, like Goebbels' own distorted eugenics (applied to Jews),  Murray and Herrnstein's is also tainted by pseudo-science, yet has the disproportional effect of undermining the fundamental fabric of our society if taken seriously. Again, why should anyone have to waste gray matter rebutting this offal any more than Goebbel's comparison of Jews to fleas? The point is there is no intellectual rebuttal possible that will persuade the minions who emotionally  gravitate to these toxic notions, given they use the notions as points of support for their racist beliefs. Hence, best to not to allow the emotional chords to be excited in the first place!

We may conclude the students at Middlebury were right to disrupt Murray as they likewise would have been to disrupt Josef Goebbels.  (They were not right to engage in any physical force or assaults, obviously ) The reason is that hate speech, irrespective of any academic veneer, merits no special place or respect and absolutely no dignifying by resort to a "free speech" ruse to peddle it.  As the notorious Gen. Hudson Austin opined after slaughtering hundreds in the Spice Island of Grenada (before U.S. forces arrived in Operation Urgent Fury in 1983): "My biggest gift was being allowed free speech on the radio to pave the way for my purge!"

Hudson had been enabled - by the deft use of hate speech and propaganda - broadcast over Grenada's government radio, to enlist enough support to put hundreds of his political opponents  (to the New Jewel Movement) in the Richmond Hill prison. There,  antiaircraft weapons were subsequently used to slaughter Austin's hapless victims, after they were forced into the prison courtyard.

Most Americans never knew or heard about that, only about the invasion of the island nation which all the Caricom nations (including Barbados) had called for.

But Charles Murray would never advocate that!   Maybe not, directly. But it is but one small step to deem a race inferior before some faction will believe it is entitled to wipe out the group so designated. Let's not fool ourselves.

It is ironic beyond belief that Morris Dees is ridiculed in Cannon's piece using ad hominem ("a shyster") while the SPLC is deemed a "hate group", even as Murray and the AEI are extolled as the bearers of light and human dignity.  But this merely discloses how perverted the intellectual landscape and critical thinking basis  has become in the U.S., to the point the pro-Trump and right wing media and its memes now hold so much sway.

http://www.smirkingchimp.com/thread/steven-rosenfeld/74109/study-how-breitbart-medias-disinformation-created-the-paranoid-fact-averse-nation-that-elected-tru
Posted by Copernicus at 8:08 AM