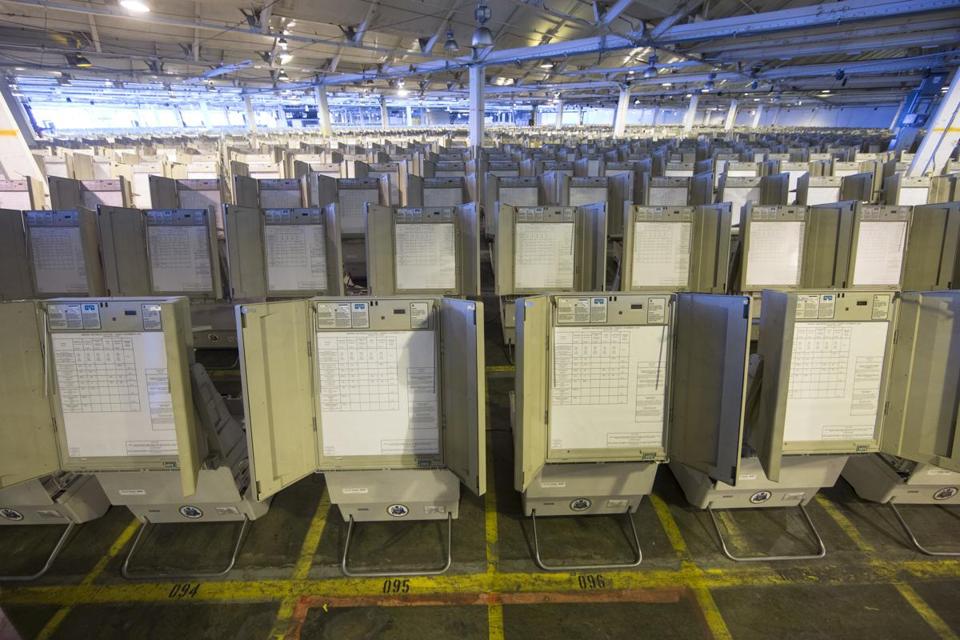 Image showing primitive electronic voting machines in Pennsylvania. Jill Stein - defeated by the machines before she could start a recount

It turns out, as many of us suspected, that Green Party candidate Jill Stein's recount efforts were doomed from the start. This may have had much to do with the dubious quality of the voting machines in Pennsylvania  one of 3 states she targeted for recounts. Recall Stein’s bid to recount votes in Pennsylvania was shot down by a federal judge on Dec. 12. The argument was that she'd produced no evidence of hacking - which suspicion she cited as a basis for recount.

The judge wrote in his opinion:

"Suspicion of a ‘hacked’ Pennsylvania election borders on the irrational"

But  this statement is predicated on the assumption of  some rigorous and consistent standard of tabulation accuracy, which we know doesn't exist with these paperless electronic machines. For any who gullibly believe these antiquated machines are as good as paper ballots, I invite you to take a gander at the machine below showing vote switching (from 2012) in action, e.g. at: http://wonkette.com/488754/watch-this-pennsylvania-voting-machine-hilariously-refuse-to-accept-a-vote-for-barack-obama

So it turns out that in retrospect the judge was right for the wrong reasons, i.e. there was no way to cross check the electronic counts using paper records - so it was therefore "irrational" to try. Thus,  in the case of Pennsylvania, any absence of evidence of hacking may have been part and parcel of the age and type of machines used. Thus, the use of antiquated electronic voting machines (see graphic) ensured there'd be almost no chance of detecting potential fraud or error in the vote — there was basically nothing to recount, i.e. independent of the electronic tally.

If Pennsylvania was the only state featuring such relic means of counting votes it would be bad enough. But according to a piece in The Denver Post yesterday (p. 13A, 'Vulnerable Votes - Rigging Disruption') this isn't so. Pennsylvania is one of 11 states where the majority of voters use antiquated machines that store votes electronically, without printed ballots or other paper-based backups that could be used to double-check the balloting. Hence, there’s almost no way to know if they’ve accurately recorded individual votes — or if anyone tampered with the count.

Should we just naively assume machines like these work properly and the votes are accurate. Absolutely not! That sort of cavalier, laissez faire attitude is more the modus operandi of Banana Republics. People's eyes may glaze over at the subject of voting technology (or lack of it) but this is important. If the validity of our elections is undermined by the machines we use to tabulate votes, then we are all living in a fool's paradise.  How so?

Daniel Lopresti, chairman of the Lehigh University computer-science department, puts it in this perspective (quoted in the Post piece):

"What you’re hoping for is some evidence that was left, some degree of clumsiness or carelessness, a belief by the individual that we won’t dig quite that deep"   But "an infected machine could do anything you can imagine" according to analyst Dan Wallach, "It could flip votes from one candidate to another. It could delete votes. It could cast write-in votes for Mickey Mouse for president.”  See one of the antics in its repertoire in the preceding link.

The brute fact is that more than 80 percent of Pennsylvanians who voted Nov. 8 cast their ballots on such machines, according to VotePA, a nonprofit seeking their replacement. A Stein recount would, in the words of VotePA’s Marybeth Kuznik, a veteran election judge, essentially have amounted to this: “You go to the computer and you say, ‘OK, computer, you counted this a week-and-a-half ago. Were you right the first time?'”

Is this any way to determine the next leader of the free world? Putatively the most powerful leadership position on the planet with the capacity to obliterate all human life under specific conditions?  I would hope enough sane, rational people are left to answer a resounding, 'NO!'

ADVERTISING
ADVERTISING
inRead invented by Teads
inRead invented by Teads
Moreover, as reported in the same article, these paperless digital voting machines, used by roughly 1 in 5 U.S. voters last month, present some of the most glaring security dangers. For example,  like many electronic voting machines, they are vulnerable to hacking. But other machines typically leave a paper trail that could be manually checked. The paperless digital machines open the door to potential election rigging that might not ever be detected.  In other words, in the wrong hands, they can lead to the election of a tyrant or other manner of demagogue.

This is why as far back as April  Bob Fitrakis and Harvey Wasserman  warned of a covert effort in Repub states to steal this year's election, see   The Flip & Strip Selection of 2016: Five Jim Crows and Electronic Election Theft (www.freepress.org / www.solartopia.org),

What’s more, the prevalence of such zombie machines  magnifies other risks in the election system, such as the possibility that hackers might compromise the computers that tally votes, by making failures or attacks harder to catch.  Quoting Barbara Simons, a former IBM researcher and co-author of “Broken Ballots" (ibid.):

“If I were going to hack this election, I would go for the paperless machines because they are so hard to check. In fact, we have a history of the unlearned lessons of flawed U.S. voting technology."

Why don't we learn the lessons? Are we too damned dumb. too complacent or too inept? Or maybe we are quite satisfied with just the veneer of democracy as comic George Carlin once put it (but in a much more colorful format via a comparison of four yearly episodes of "jerking off").

The  Post article noted that the U.S. voting system is "a loosely regulated, locally managed patchwork of more than 3,000 jurisdictions overseen by the states, employing more than two dozen types of machinery from 15 manufacturers."  This hodge podge of methodologies, not to mention superimposed voter ID regulations, is an invitation to the disenfranchisement of millions.

Meanwhile, election officials across the nation insist  they take great care to secure their machines from tampering. They claim they are locked away when not in use and sealed to prevent tampering.
They also maintain that all that makes national elections very difficult to steal without getting caught.

But difficult is not impossible.  Expert Dan S. Wallach and his colleagues believe a crafty team of pros could strike surgically, focusing on select counties in a few battleground states where “a small nudge might be decisive."

As a battleground state with paperless voting machines, Pennsylvania would be a perfect candidate. In affidavits for the recount. Computer scientist J. Alex Halderman of the University of Michigan laid out how attackers could conduct a successful hack (ibid.):

—Probe election offices well in advance to determine how to break into computers.

—After identifying battleground states, infect voting machines in targeted counties with malware that would shift a small percentage of the vote to a desired candidate.

Also pointing out that just because the machines aren’t on the internet doesn’t mean they can’t be hacked. Election workers could be duped or bribed into installing malware that sat dormant until Election Day. Locks could be picked to gain access to the machines, seals compromised with razor blades and acetone. Studies by Halderman, Wallach and others proved years ago that it’s possible to infect voting machines in an entire precinct via the compact flash cards used to load electronic ballots.

Jill Stein's Green Party lawyers seeking the Pennsylvania recount called the state’s election system “a national disgrace” in a federal lawsuit, noting that many states outlaw paperless voting.   The most outrageous aspect of the whole thing is it could all boil down to a lack of money, or rather willingness to ensure the nation's voting systems are on a par with those - say in Germany.

According to Edgardo Cortes, the  PA state elections commissioner( ibid.):

“The federal money is not there and in most instances state money is not being made available, either.  So the entire cost is falling to local governments.”

Any person who doesn't believe this to be disgraceful has no right referring to himself as a citizen. Because a citizen, above all, attends to the machinery of government and is committed to its integrity. He doesn't belittle it or dismiss it when it's convenient, say when his party or candidate wins.

On an objective and rational level, just as Congress earlier delivered a death blow to punch cards, it should also outlaw paperless touchscreen voting machines and pay for their replacement. This according to Andrew Appel, a Princeton University computer scientist quoted in the Post article.

Bottom line: Until we collectively get our act together we can't be sure of any election outcome, and the very act of "certification" becomes a lame joke.