How Did The Tourist Crowds in Europe Become A Scourge?

Part of the crushing crowd at the Sistine Chapel where guards often shout 'Silence!' and people are jostled and stepped on in their effort to see Michelangelo's wonders.

What's going on in Europe with the dense crowds stepping all over each other? As first reported in the WSJ May 25, ('Europe's Culture Storm')  a "perfect storm" has been coming together as popular European venues get overrun with tourists of all kinds, including Americans taking advantage of the unusual dollar strength.

The World's Fair or Milan Expo expects 20 million visitors alone, from May through October.  Eiffel Tower crowds are up 170 percent from what they were the same time last year. And after a crowded day at the Louvre last month one visitor complained that the lines were unbearable not only for entry but also toilets, food and the paintings themselves. Another described it as a "vision of hell". Seriously? A beautiful tourist destination has now become 'hell'? Well, let us remember it was the French philosopher Jean-Paul Sartre who once pronounced: "Other people are hell".

Meaning that in certain contexts and scenarios  (and  especially with high density numbers) one's fellow humans erode the quality of life and experience, and indeed destroy it even if one is a so-called "people person".

According to the WSJ piece, one American couple visiting the National Gallery in London warned that rooms were so full it was "impossible to see anything" and further the husband was "on the verge of a panic attack". On many days the Palace of Versailles simply cuts off entry to one and all. It seems almost wherever one goes in Europe is flooded with tourists.

Another American reported that while trying to appreciate the works in the Sistine Chapel his foot was being crushed by a Texan oblivious to his surroundings and more immersed in chomping tobacco chaw from which spittle dripped to the floor.

Meanwhile an article in In These Times ('Should Cities Ban Tourists?', August, p. 12) observed that Barcelona's Mayor now insists the popular Spanish destination needs a "tourist cap" and a "moratorium on new hotel licenses".  This since "tourism is now seen by many as a scourge" and as reported by one resident:

"They have urinated on my balcony. They have set fire to laundry and one even defecated in the building's hallway"

Jeebus! Well, even if not "hell" personified seems people are at least "devils". Too many of them anyway - to the point you can't even take a deep breath while taking in art.

By way of perspective, when we visited Europe in July and August 1978 we experienced no similar issues. We easily got into the National Gallery in London  and Greenwich Observatory, same with Windsor Castle, Earl's Court, Westminster Abbey, St. Paul's Cathedral, the Royal Albert Hall for a summer concert as well as the Tower of London with no delays and not being forced onto conveyor belts as they have to do now to rigidly control the time allowed (30 sec), i.e. to see the jewels (WSJ,ibid.)

What gives is the world is a much more crowded place than it was 37 years ago with nearly twice the number of people and also many more affluent people- namely Chinese - who can now afford to travel at will to wherever they want - from African safaris, to Jungfrau Joch in Switzerland. Thus, I wasn't that surprised while on the train  from Kleine Scheidegg to Wengen  last year seeing two Chinese in Mao suits, obviously Politburo members.

What was an elite pastime back then is now very much a mass enterprise, facilitated by mass plane travel - itself made possible by cramming people onto planes like sardines thanks to deregulation. And then there is the incessant pressure of social media on every manjack to get that exotic Instagram from wherever he can - but preferably from some place in Europe- the more exotic the better. 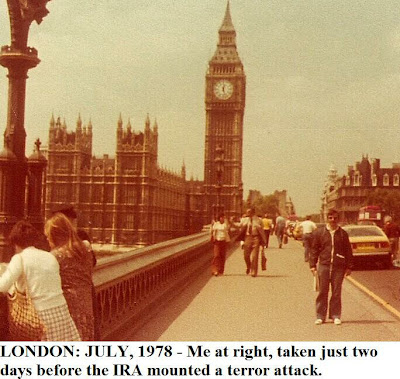 Another reason the crowds, for example, in London - may have been much smaller back then was the fear of IRA terror. In fact when we were there one such attack occurred that had the city horrified. But still, I believe the population density and rising living standards have more to do with what's going on now because the majority of people travel to European destinations without being deterred by potential terror attacks.

Of course, there is a way to escape the masses and crush and that is to select locations and times where, when they won't appear  - for example we chose to go to the Zugspitze in May of 2013 and found virtually the whole plateau empty of crowds including Chinese, e.g.

Same thing in the town of Garmisch-Partenkirchen (Bavaria) where we stayed for a week. We could see the sights, and move around without feeling like we were crammed into a sardine can. Also transport, restaurant bookings and even shopping at the local marts were all a cinch. No elbow jostling for space or resources.

Switzerland last year, however, was pretty packed - but we were told not as much as it might have been had we come in mid=July. Recall the scenes out near Jungfrau Joch, e.g.

And, of course, there were certain "crowds" one didn't mind,

Perhaps this is why we've more enjoyed European  excursions to the mountain areas rather than the urban. And fortunately, the cultural areas and exhibits we did really want to see were already taken in when the world was much less populated.
Posted by Copernicus at 7:07 AM