James Loewen, author of 'Lies My Teacher Told Me', spent two years at the Smithsonian Institution surveying twelve leading high school textbooks of American history. What he found was an "embarrassing amalgam of bland optimism, blind patriotism and misinformation" as summarized on the dust jacket of his book. Basically, he found our kids are being taught pabulum and bollocks, passed off as real history.

I already wrote of his skewering of myths to do with Christopher Columbus, e.g.

And now he has taken on the baloney and BS circulated by those he calls "Neo-Confederates" in his essay, 'Why Do Some Believe Myths About The Confederacy?' (Denver Post, July 5, p. 1D), very timely as the South Carolina state legislature is now on the verge of finally removing the odious Confederate Battle Flag. As he puts it:

"As soon as Confederates laid down their arms, some picked up their pens and began to distort what they had done and why."

Adding that a generation later, "the resulting mythology went national and persists - which is why a presidential candidate can suggest that slavery was somehow pro family and the war was fought mainly over states' rights."

Thus, the Confederates had "won with the pen and the noose what they could not win on the battlefield".

In other words, sore ass losers whose only way out was to reconstruct and revise history to their liking. The tragedy wasn't so much that they did this, but that so many accepted it and it's even crept into history textbooks alongside the codswallop about Columbus, the treatment of American Indians and the origins of the Vietnam War.  As Loewen puts it:

"We are still digging ourselves out from under the misinformation that they spread  which has manifested in both our history books and our public monuments."

Again, you don't see Nazi monuments in Germany, so why are we seeing Confederate monuments here in the U.S.? Or is it that we extol those who fought on the wrong side and moreover propagated one of the most vicious sub-human, brutal programs in history where slave women could be raped at will by 'Massah' while holding his Confederate flag, and her husband could be whipped to death for complaining.

This was the system put into place by these degenerates which the mythology of today's Neo-Confederates defends.

Loewen adds that these degenerates have also succeeded in altering the language which has actually been accepted, noting:

"In addition to winning the battle for public monuments, neo-Confederates also managed to rename the war, calling it 'the War Between the States'.  Never mind while it was going on nobody called it that."

But Loewen asserts the "most pernicious" claim by these neo-Confederates is that the Civil War was fought over states' rights.  As he puts it:

"When each state left the Union, its leaders made clear that they were seceding because they were for slavery and against states' rights.  In its 'Declaration of the Causes Which Impel The State of Texas To Secede From The Federal Union' for example, the secession convention of Texas listed the states that had offended them: Maine, Vermont, New Hampshire, Connecticut, Rhode Island, Massachusetts, New York Pennsylvania, Ohio, Wisconsin, Michigan and Iowa.

These states had, in fact, exercised states' rights by passing laws that interfered with the federal government's attempts to enforce the Fugitive Slave Act. Some also no longer let slave owners transit through their states with slaves. Thus, 'states' rights' were what Texas was seceding against."

Even more malignant, as Loewen writes:

"During and after the nadir of the Civil War, neo-Confederates put up monuments that flatly lied about the Confederate cause. For example, South Carolina's monument at Gettysburg, dedicated in 1965, claims to explain why the state seceded: 'Abiding faith in states' rights'"

But this was exploded on the same basis as Texas' reasons given earlier.  South Carolinians also invoked specious "states' rights" in 1965 when they tried to prevent federally mandated desegregation, but as Loewen points out (ibid.):

"The one constant was that the leaders of South Carolina in 1860 and 1965 were acting on behalf of white supremacy."

"So thoroughly did this mythology take hold that our textbooks still stand history on its head and say secession was for, rather than against, states' rights. Publishers mystify secession because they don't want to offend Southern school districts and therefore lose sales."!

"With our monuments lying about secession, our textbooks obfuscating what the Confederacy was about, no wonder so many Americans supported the Confederacy until last week. We can literally see the impact Confederate symbols and thinking had on Dylan Roof".

Indeed, because that thinking is all about white supremacy, nothing more, Defending their ancestors' "rights" to keep slaves, rape them at will, beat and starve and work them mercilessly - and split families asunder at will.

At least the Germans who once supported the Third Reich let that 'puppy' die soon after, and erected no Nazi monuments. Even my three German friends, Dieter, Hans and Werner, who fought in the Wehrmacht - were adamant that they spit on the swastika and were against any Third Reich memorials. They insist, and history supports them, that the Wehrmacht was seized by Hitler for his own purposes. Unlike the Southerners who willingly joined the Confederacy to fight to preserve slavery, the Germans were conscripted into the Wehrmacht under threat, mainly to their families. 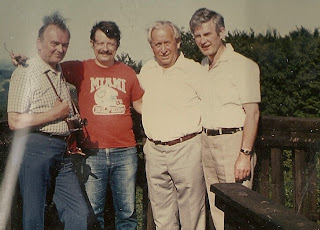 Photo: Teutoburger Forest, W. Germany, May, 1985, with two former Wehrmacht soldiers- Dieter on the left and Hans on the right. Far right is Reinhardt who acted as translator.

The Third Reich, as Hans put it, was "not about anything patriotic or a noble heritage" but imposing its will on Europe and the world and subjugating - butchering Jews. Dieter was even more forthright when we talked in the Teutoburger Forest in May, 1985, observing that anyone who'd remove those issues from the basis for German aggression was "stupid" and "didn't know Third Reich history".

In the same way, James Loewen writes that "removing slavery from its central role in the Civil War marginalizes African-Americans and makes us all stupid"

It is time now Americans wake up and move beyond that historical stupidity. If the Germans can do it, so can we!

South Carolina removing its Confederate Battle flag later this week would be a momentous step in that direction.
Posted by Copernicus at 7:07 AM