An Observational Boost for Magnetic Reconnection In Earth's Magnetosphere 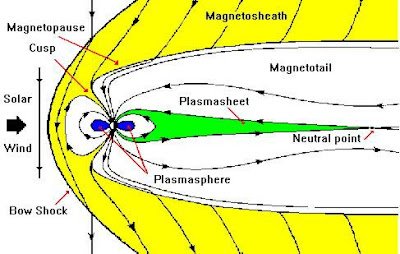 General structure of Earth's magnetosphere (above) and detail near the sunward solar wind plasma flow with X-line shown.

Ever since Walter J. Heikkila's paper on 'The Reconnection Myth' in Eos Transactions, the occurrence of magnetic reconnection as an energy generation (and dissipation) mechanism in solar and space systems has been hotly debated. Does such reconnection actually exist, and in particular - does the conceptual 'heart' of such models - known as the 'X-line' (or 'X-point' in solar situations) exist?

In solar physics the general reconnection model has been associated with the production of solar flares and one of the earliest was attributed to Peter Sturrock. Most often the proposed structures occur as sheets, hence known as 'current sheets'.

In the case of Earth's magnetosphere (see top graphic) magnetic reconnection enters by way of incoming solar wind plasma interacting with the Earth's magnetic field. By this concept, the interplanetary magnetic field divides or disconnects at an "X-line" at the magnetopause with one end going over the north pole and the other the south pole. These polar lines are called "open" with only one end connected to Earth - as the graphics indicate. In each case the total amount of open flux must conform to Maxwell's equations, see e.g.

Generalizing, a similar X-line is proposed to occur in the magnetotail with the two ends hypothesized to reconnect with a return flow of plasma and magnetic flux occurring toward Earth.

Obviously, invocation of the reconnection model depends critically on the existence of the X-line, and now that appears to have been validated using the European Space Agency's Cluster satellites, a quartet of satellites that orbit Earth in formation. Specifically, Wilder et al (Journal of Geophysical Research, Space Physics, 2014) have actually observed a retreating X-line and measured its velocity for the first time.

They note as the Cluster craft traversed the Southern Hemisphere in 2005, two of the satellites - roughly 5500 km apart - detected a sharp reversal in the magnetic field direction and the flow of ions -  within 40 seconds of each other. The authors concluded that both craft passed right through an X-line retreating down the Earth's magnetic tail.

More interesting, their data hint at a second reconnection event forming another X-line behind it. The event would have isolated the patch of field lines caught between the two reconnections. The 40-second delay between postulated X-line encounters also enabled the team to make the first direct measurement of an X-line's velocity - clocked at 136 km/ sec- or about the same speed as the flow of ions outside the boundary region called the magnetosheath (see top diagram)

The authors assert their findings lend credence to at least one version of magnetic reconnection theory as it applies to the magnetosphere. It would be nice to see a similar vindication for presence of X-points presumed to be associated with pre-flare magnetic configurations on the Sun. One example, is the reconnection model of Tsuneta (1997) which is basically a more elaborate update of Sturrock's reconnection sheet:

Here, as opposed to an X-line (for Earth's magnetosphere) we have an "X-point" where the magnetic field reversal occurs.  The problem is not trivial and Heikkila's original argument, i.e. that reconnection may be merely a manifestation of anomalous resistivity, could apply. Up to now, no satisfying resolution has been found and current sheets continue to be used because they provide at least a cartoon approximation of the physical agents at work.
Posted by Copernicus at 7:35 AM