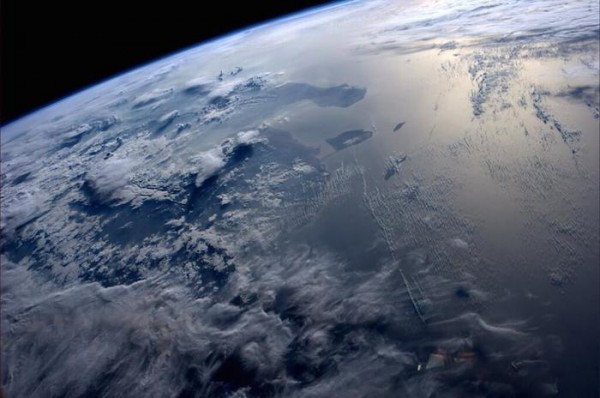 One of Reid Wiseman's Twittered images.

Everyone seems to be literally all a-Twitter at astronaut Reid Wiseman's Earth imagery taken from the International Space Station. He evidently has over a million followers, and as one voice over noted in playing a clip of him doing somersaults at zero g: "With infectious enthusiasm Wiseman lives the life at zero gravity that others can only dream about."

Maybe. But without the use of Russian Soyuz craft he wouldn't even be there, so let's not pretend or make it out like it was by his own steam or virtue that he arrived at the IST - or that it was his own country that enabled it. NO, not at all. His own country, the U.S.,  abandoned its Space Shuttle program over three years ago and has had to depend on the Russians to get crew to the Space Station. Without the Russians allowing Wiseman and his fellow astronaut Swanson to "hitch hike" on the Soyuz, they'd never even be there.

There'd be no majestic Earth photos and certainly no Twitter followers.

Sure,  the U.S. pays for each astronaut to trek to the Station, but the point is that if the Russians still didn't have working craft of their own and a manned space program it wouldn't matter how much the U.S. offered anyone - they wouldn't be able to buy the astronauts' a way into space for anything. It is the Russian craft which made Wiseman's photos possible. Apart from that, if the U.S. pushes its Ukraine pressures excessively, the Russians could easily close the door to the Station - given it is THEIR craft that provide the transport - and only their section of the IST is self -sufficient. (Those who insist the Russians "need the money" - need to check out the recent mammoth $400b gas deal made with the Chinese).

Wiseman, in his understandable exuberance, says he wants to share his perspective and "get people talking about the wonder of space".  As he put it:

"If I can just capture a little of the wonder and spark some imagination for folks around the world, and back in the U.S. in particular, then that's mission accomplished for me."

Bravo to you! Just be sure to acknowledge the Russians, without whose craft you wouldn't have a mission, or any opportunity to obtain your incredible photos.. Or so many enthralled followers on Twitter, who have re-tweeted the 'red die in space' more than a million times.

Let's also hope the U.S. has the sense not to piss off the Russians any more on the Ukraine issue, causing a complete halt to all IST cooperation and any further U.S. astronauts getting to play in the space station, or get fantastic photos.

U.S. space junkies, some of them, assert the U.S. will soon have its own program back, thanks to private outfits like Space-X. But from my vantage point, that is years away. I'd even be amazed if they have a manned craft ready to go to the IST in 3 years. (Robot craft are one thing, but you need lots of redundancy with manned craft and private companies are more likely to cut corners for profit.)  I will bet it's more like five years. So, until then, space junkies and jockeys need to cool their heels and acknowledge it's at the Russkies' pleasure we have any "manned space program" at all!
Posted by Copernicus at 8:35 AM