The Harry Bayley Observatory: Will It Flourish With Its Reset? What We Found in Barbados 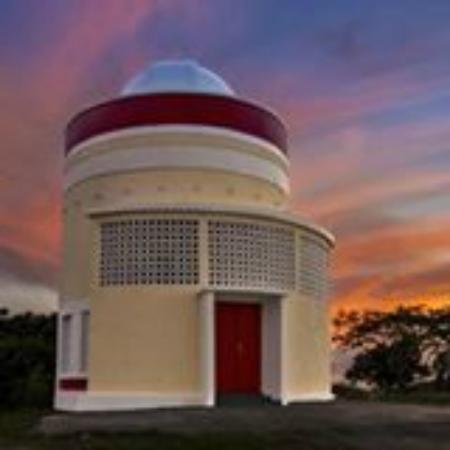 The Observatory as it is now.

The invitation received from the Barbados Astronomical Society several months ago to attend the grand opening of the Harry Bayley Observatory was met with excitement - and some degree of skepticism. Could it really be true that the Observatory (which only recently celebrated its 50th anniversary) was back up and running again? In the two comparison photos, the top one shows the refurbished Observatory we encountered on a recent junket to Barbados to experience a grand opening-  done for us - and at bottom is how the Observatory appeared several years ago after vandals had broke in and smashed precious equipment. (Including an orrery, 19th century sextant and celestial sphere model.)

But "miracles" of a sort can indeed happen, and in this case it was a million dollar BDS grant from the British-based Sfumato Foundation, to entirely upgrade and refurbish the building as well as purchase a new, full computerized Meade 16" Cassegrain telescope (the largest of its type in the eastern Caribbean) as well as a NASA-designed Malin camera and a dedicated solar telescope for H-alpha observations.

According to a story appearing in the Barbados press ('Observatory Back in Operation', The Nation, May 12) the breakthrough was accomplished after a representative of the Sfumato Foundation visited the Observatory and learned of its history, including conducting many teacher seminars, as well as lecture series and open nights for the public. (This was also around the time I'd developed the first astronomy syllabus and student -based projects for the Caribbean Examinations Council.)

The notification, including reference to all the new equipment, caused us to wonder who exactly would be using it to maximize the investment. A computerized 16" Cassegrain, Malin camera and dedicated solar telescope bespoke professional -level potential but the BAS was mainly an amateur society - so who would be using the sophisticated equipment and what would it be used for?  These were some of the things we wanted to find out when we departed for the island.

When we first arrived at the Observatory on the evening of  Friday, May 23rd, we were met by several long time members, including current President Ricardo Small. At that time, I presented him with my book: 'Astronomy and Astrophysics: Notes, Problems and Solutions' - based on materials, lectures and problems covered during workshops and courses I'd given at the Observatory in the 1970s-and early 1980s. An inauspicious sign was when Mr, Small took the book and stuffed it behind a lectern on the bottom floor (the 'lecture' floor) as opposed to putting it in the library.

Naturally, I then wanted to see the library (2nd floor construction originally donated compliments of the British High Commission in 1978)  because if an Observatory is to be truly research -oriented and especially to carry out projects with sophisticated equipment, then a library is essential - perhaps more fundamental than even the equipment itself.  So, we trekked to the second floor where the library would normally be. There I was astounded to see no books at all, only several Sky & Telescope magazines-  but mostly open boxes, and computer equipment.

There I had occasion to talk to two long time members, Michael Hercules and Bill Sutherland, shown below - at the 2nd floor.

With Michael Hercules (left) and Bill Sutherland - on the Observatory 2nd floor.

Bill told me that since I'd last seen the library back in 2007 (when most of the books were in a state of decay or worm-eaten) it had not been 'resurrected'. (One of the female members had apparently been "storing" the books at her place.) He himself made it a point to preserve one special volume - Otto Struve's 'Elementary Astronomy' - actually donated by us to the Observatory before we left for the States. He offered it to me as a kind of memento and obviously believed there'd be no regular use for it at the Observatory. So I accepted it and have brought it back to put in my own library. "Indian giver"? Maybe, but I'd rather that than that the excellent volume isn't used at all.

Subsequent talks with two female members, both well -versed in astronomy, suggested that the current President "isn't a lover of paper" which could explain a lot. However, if not paper, what? Kindle books? PDF books? Nooks?  They didn't know and couldn't say.  When pressed as to who would actually be using the equipment we were basically given only generic, general information to the effect the Society was "trying to make contact with  physics researchers at the University" (of the West Indies) and also that they hoped two professionals in Trinidad (including Dr. Shirin Haque) might avail themselves of the equipment for research projects in conjunction with the Society.

Arriving at the top level of the Observatory, we were shown how the dome is now fully automated, revealing the spanking new telescope. And a beauty it is (see below):

The computerized system allows any one of nearly 140,000 celestial objects to be not only instantly located but also displayed on a 5' wide screen with all the surrounding objects, constellations. Below, Ricardo demonstrates the object location potential of the system to Janice, finding a nebula within seconds.

Again, more questions came from Janice as to WHO would be using this elaborate equipment and what exactly they'd be doing with it?  Again, no clear answers were forthcoming.  Who would use the dedicated solar telescope and what would they do with the H-alpha imagery and photos? No answers, but perhaps someone at UWI would undertake a project. What about the fancy Malin NASA- designed camera? Unfortunately, the camera could not be interfaced with the telescope. The reason given by Mr. Small was that "conflicting information" had been given from various sources regarding the best camera to use with the scope at the time of purchase. Could the non-interfacing camera be replaced? No idea.

By the end of the tour, despite the fact that the sky was now totally overcast, some 20 people had arrived and congregated in the lecture room. This was to see and hear a presentation on the solar system by Mr. Small.

This evening, the admission was only a voluntary  "donation" - given the overcast sky - but the normal admittance fee we were told was BDS $20 (U.S. $10).

As we prepared to leave, the two women told me they'd love to contribute more but were limited and could only do what the "higher ups" allowed. These were described as male members of the "board" which now took the place of the original Council, as the Society itself had become a "non-profit" as opposed to an amateur Society with regular annual general meeting, voting etc. What this all meant, they couldn't say.

My own personal assessment of the visit was largely that the brand new scope would continue to be used only for 'Show and tell' and no serious work would be done. Betting on outside expertise to maximize the investment was more or less living in la-la land. Shirin Haque, indeed, is more involved in archaeo-astronomy than solar astronomy or comparing light curves of visual binaries. As for the Malin camera, until it is replaced with one that can interface with the telescope, no really professional work or research was very likely.

Education, to be sure, is an important function and one for which the initial grant was made. However, education alone (including showing the stars, planets to the public on open nights - and giving talks) is simply not enough to justify the magnitude of the grant given or the equipment purchased with it.

The conclusion, therefore,  is that the Observatory will likely survive and fulfill at least part of what the equipment enables it to, but not nearly all. Which is a pity.  We wish the Society and the  BAS members all the best but do hope the next time we visit, if we do, the equipment is put to much better use than merely occasional public observations.
Posted by Copernicus at 7:21 AM

Another Barbadian exercise in futility. I would forecast that within a year the observatory will return to it's dilapidated and vandalized state.