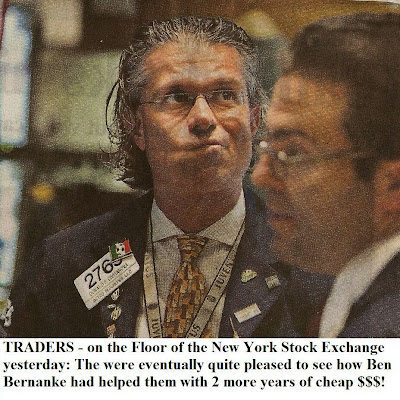 Several reports coming to my attention the past two weeks all but scream “ALARM!” in terms of the DOW and the stock market. While millions of small fry have rushed back into the stock game to try to make up for 401k losses, they are doing so in a perilous bubble environment not based on sound economic markers. If stock investors, especially the small fry –small scale investors, fail to grasp the underlying dynamic of what’s driving the DOW to absurd heights (that belie the real indices) then they’re putting themselves in line to lose most of their nest eggs.


First, there is the recent ‘Kiplinger Letter’ noting (p. 2) that “healthy gains in output won’t bring an equal gain in employment”. The reason? Corporate employers’ continued yen to “squeeze more from less” (i.e. get fewer workers to do more work) and increasing automation. The subtext is that corporate employers remain averse to hiring real flesh and blood humans because of having to pay wages and benefits, thereby lowering their profit margins. Worse, (p. 1), corporate America has no intention of plowing its $1.7 trillion cache into new jobs for at least another year, and maybe more.

These tendencies are amplified by other unmentioned ones (in the KL) which were exposed in a recent piece (‘The Barbarians are Back’, TIME, March 25, p. 16) by Rana Forhoohar. For example, “just in time manufacturing” allows companies to hold less inventory and be more nimble but also requires more cash in reserve to support quick start ups. In other words, as Forhoohar explains, “companies are becoming their own banks.” This also gives them more latitude to invest outside the U.S. and with that expanded choice, 99 times out of 100 they will do so. Damned the need for new jobs in the U.S.

As another case in point, she cites Apple, which keeps funds abroad in part for tax avoidance. i.e. “to skirt U.S. taxes on foreign earnings.” She goes on to note that “this technique is particularly common among cash rich technology companies and investment firms because of laws that make it relatively easy to move intangible assets abroad.”


Wonder why so many new college grads are sitting around in parents' basements at home playing SIMS online or waiting tables for $2.13/hr plus tips while they face enormous college debts? Well there it is! The U.S. techie companies, enabled by legislation compliments of our political whores (who make it easy for the companies to hoard cash abroad), aren’t doing squat to help Junior or Missy start earning real money!

Meanwhile, as Forhoohar observes, the big CEOS are more worried about their personal balance sheets than shareholder value, especially that of small fry (the flash traders can take care of themselves using algorithms for the computer flash trade and fractional share trading.) As she adds, with this “short termism” - this blinkered profiteering for the short term practiced by CEOs, “we all have something to lose”.


In the meantime, this short term virus of obsessive capital hoarding risks further infusions by the Federal Reserve in the form of quantitative easing that will further inflate the existing stock bubble. Much of the current rise in stock prices is due to a Fed buying spree. The past 4 years Bernanke’s Fed has pumped out billions to buy bonds and mortgage –backed securities. This tactic helped to fuel stock prices by forcing investors (mainly small fry) to chase yield and return in the equity markets. As Forhoohar has observed (TIME, March 18, p. 18) Bernanke intends to keep the spigots flowing through next year – which means we could be seeing the biggest stock bubble in history.

How to recognize a bubble that could lead to a massive correction? Arch-forecaster Nate Silver, in his book, The Signal and the Noise- Why So Many Predictions Fail But Some Don’t   has the answer (p. 347):


Now, add to this the risk-taking biology of traders and you have a recipe for a disaster. Jim Coates, of the University of Cambridge, and a former Goldman Sachs trader, recently reported on a series of experiments conducted by himself and colleagues at Cambridge on the London trading floors. He found that during “winning streaks” such as now beheld with the soaring DOW, the biology of typical traders “over reacts” and “risk taking become pathological”.


For male traders, particularly affected, “testosterone levels surge, hemoglobin increases and oxygen levels in the blood – which increases the brain’s appetite for risk and feeds over-confidence. Such a combination was likely responsible for the creation of the credit default swaps back in 2007-08 which nearly took the entire economy down. Coates’ conclusion is that at some point in the upward spiral of testosterone-fueled confidence, judgment becomes impaired. It is this impairment  (known as "irrational exuberance" about 10 yrs. ago) that's sowing the seeds for the next crash. As he puts it (TIME – Business Report, July 9, 2012, p. 18):


How will the latest overt risk taking manifest in the markets? What new confections will the quants who devise financial instruments come up with? We don’t know. But that is the worry! What we can be sure of is that every Bull market has one function and one only – according to George P. Brockway, author of  The End of Economic Man’‘. That is, any given Bull's purpose is to suck the savings and nest eggs from the ordinary investor and transfer it into the hands of the richest speculators who know the small fry will never be able to resist rapidly rising share prices.

But maybe they will next time!

According to this new item from Money News: http://www.moneynews.com/MKTNews/billionaires-dump-economist-stock/2012/08/29/id/450265?PROMO_CODE=110D8-1&utm_source=taboola

Billionaries are dumping stocks BIG time.   Acording to the piece:

"In the latest filing for Buffett’s holding company Berkshire Hathaway, Buffett has been drastically reducing his exposure to stocks that depend on consumer purchasing habits. Berkshire sold roughly 19 million shares of Johnson & Johnson, and reduced his overall stake in “consumer product stocks” by 21%. Berkshire Hathaway also sold its entire stake in California-based computer parts supplier Intel.


With 70% of the U.S. economy dependent on consumer spending, Buffett’s apparent lack of faith in these companies’ future prospects is worrisome. Unfortunately Buffett isn’t alone.

Fellow billionaire John Paulson, who made a fortune betting on the subprime mortgage meltdown, is clearing out of U.S. stocks too. During the second quarter of the year, Paulson’s hedge fund, Paulson & Co., dumped 14 million shares of JPMorgan Chase. The fund also dumped its entire position in discount retailer Family Dollar and consumer-goods maker Sara Lee.

Finally, billionaire George Soros recently sold nearly all of his bank stocks, including shares of JPMorgan Chase, Citigroup, and Goldman Sachs. Between the three banks, Soros sold more than a million shares."

WHY is this happening? According to the MONEY News author:


"It’s very likely that these professional investors are aware of specific research that points toward a massive market correction, as much as 90%."

Do you know what a 90% correction will do to your 401K? Let me summarize it with one sentence:

Posted by Copernicus at 9:27 AM