"Chained CPI"? Better Have a Million Saved for Retirement! 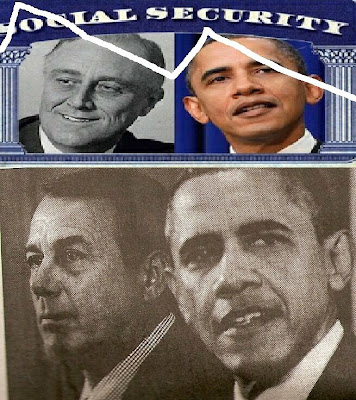 So this is the latest advice from the Money pundits (e.g. in MONEY magazine), and who am I to argue with them? They are, of course, looking at the worst case scenarios (which may not be that far off or improbable) of the Chained CPI kicking in with 3% decennial cuts to Social Security as inflation spikes back up to 5-7% per year (from increased oil prices, perhaps due to a fracas with Iran or simply Peak Oil hitting full tilt) and Medicare premiums spiking to maybe $200 a month. Then, do the math! You will need roughly $1m to reach age 88 if you should live so long. (Personally, you might be better dying of a heart attack first.)

Even now, minus the Chained CPI seniors are advised to have at least $280,000 saved just to cover what Medicare doesn't. That's if you retire this year. If it's in five years, you will need around $390,000 what with medical inflation and charge master billing running amuck. (See my blogs on TIME's expose of the medical gougers.)  Add in a possible nursing home stay at $85,000 (say for 6 months) and we're talking real money, and we haven't even factored in fuel prices.

Even "Malice" Rivlin admits now that the Chained CPI is a real cut. As she put it in a recent interview:

"One thing is the reform of the consumer price index which is really a technical adjustment, but it would mean slightly lower social security benefits and other benefits going forward. Now you could offset that with other changes in the law, but it is the right thing to do ......and he has certainly put Medicare adjustments, various sorts on the table."

But as the  'Political Liars' blog put it in a putative response:

My gripe with the Chained CPI is identical to most of those in the real Left, unlike the faux left, aka poseurs. That is, facing a twenty or more year time horizon which is sure to see major spikes in inflation, from rising oil prices if nothing else, seniors-  disabled folks on S.S. will be seeing their yearly benefits eroded year after year. This despite the fact Social Security never contributed one red cent to the deficit!

This "chained CPI" assumes that as prices increase, consumers will buy lower cost alternatives, reducing the amount of inflation they experience. (For example, if the price of stew beef or hamburger rises by 30 cents a pound, they'll opt for pork). BUT what these dingbats don't process is that this is fairyland, magical thinking! WHAT if  both pork and beef prices increase? THEN WHAT? Well, I guess it's cat food, or maybe sardines three times a day, but I notice even their price is going up - now to $1.35 a can. Hey, maybe hungry seniors can raid dumpsters for tossed out egg McMuffins!

The other aspect, as Sen. Bernie Sanders keeps mentioning, is that for seniors it isn't easy at all to find alternatives for high inflation products - since they're captives of the medical-industrial-pharmaceutical complex. Since our great government refuses to allow Medicare to bargain for the lowest cost drugs like the VA, those drug prices keep going up! Thus, it isn't like simply opting to buy a 33" LCD TV instead of a 55" flat screen HDTV! If you must have Lipitor, or some blood pressure meds, or others - say for depression - the total costs will ruin you if your total income is pared year after year by this "chained CPI" gimmick. (Which in the end is yet another evil product of the evil Pareto Distribution).


The Pareto is evil because as I showed in those two previous blogs on the Pareto and "Pareto efficiency", (e.g. http://brane-space.blogspot.com/2011/06/modern-economics-its-evil-basis-pareto.html)  it regards the dollars of the wealthy and affluent as having more "utility" than the dollars of fixed income seniors, or the poor. Thus, in considering any option of whether to give more relief to fixed income seniors (who get their S.S. monies by simply existing and breathing every day) or the wealthy- who may invest it to buy yachts, $2 million 'Billy the Kid' tintypes, 50 Lamborghinis or blood diamonds, it's always better to give the money to the latter while letting the former suck salt, or pound sand. (Or jump off a cliff?)

Since the "utility" of a senior dollar is only about one one thousandth of the utility of a buck from Jamie Dimon, it's much better to give Jamie big tax breaks (via tax cuts) than to preserve Social Security or a decent COLA for seniors!

What does this change in COLA mean then? Basically smaller annual increases in Social Security payments, government pensions and veterans' benefits. As the potential cuts are phased in, a typical 65 -year old who opts for taking Social Security at 62 will get an annual reduction of $130 in his first year. In his second year, it will be $144. In his third year it will be $172 and in his fourth year, $186, and his fifth year, $200. Also at the end of this fifth year, a cumulative total $886 (for 5 yrs.) will have been lost by attrition, or equal to one month of his benefits. By the time he's 85 the cut would be $984 a year and the total money lost by yearly attrition nearly $10,500.


'Political Liars' blog further observes that: "Some propose adopting the chained CPI with an added “birthday bump” – a 1 percent benefit increase for each of years 20 to 24 after initial retirement eligibility. But this supposed “sweetener” only affects those who live until becoming eligible for the birthday bump. Wealthier seniors live longer than their lower-income counterparts, so the “birthday bump” does not adequately protect those who need Social Security benefits the most. Even with it, the birthday bump does not fully compensate for the cut the chained CPI entails."

"The problem is that the Chained-CPI reduces the cost of living adjustment down by 0.3 percentage points annually. That translates into a cut in benefits of 3 percent for those who have been retired ten years, 6 percent after 20 years, and 9 percent after 30 years. The people who have been retired the longest and are, therefore, the poorest, will see the largest cuts. A 1% "bump" isn't going to make much of a difference. This is a cut. And it's substantial."

I agree, but even more noisome to me, but what you'd expect from the coddled Elites, is a pernicious belief in Washington circles that 70-year-olds who are living on $25k- 35k a year won't feel a cut in their incomes, which just goes to show how detached they are from the way people really live. You factor in ONE major medical energency or say a breast cancer requiring tamoxifen or long term chemo, and the affected senior is not merely reduced to cat food but out and out garbage!  Meanwhile, the rich bastards will continue to insist on the gold-plated toilets, special health spas, and trips to St. Kitts over the weekend for 18 holes. It's a god damned disgrace!


Needless to say, this abomination and perfidy must be fought with all the force and intensity that we also used against Bush's (2005) attempts to privatize Social Security!  Btw, next time Obama invites the Repuke turds to a special lunch, he needs to feed them cat food (or rancid sardines will do) , to see how they like it!

For those who need to get up to date on Neoliberalism, what it means, how it came to be, check out: