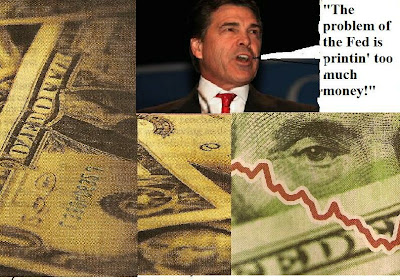 Like most Tea baggers, Texan governor Rick Perry prefers his truths as simple as a mashed up plate of hominy grits. No lumps, no complications. And no surprise that when he speaks about the Federal Reserve and it's "printing money" he reduces the intellectual content to the level of hominy grits without one tiny micron lump of...anything! In other words, a cartoon! Which suits his empty-headed followers who undoubtedly detest all them thar "smarty pants elitists".

But Perry merits being pulled up for his recent display of rank ignorance, not just his threats against Fed Chairman Ben Bernanke to do with "printing money is treason" but also a more generic recent statement that "The Fed has a problem printing Money". (WSJ, today, page A3). To hear Perry tell it, one would imagine Ben Bernanke and a thousand drones feverishly working all hours of the day and night to print out as many $10s, $20s, $50s and $100s as the machines of the Bureau of Engraving could take!

Of course, this is bare bollocks! Now, I know many people experience their eyes glazing over when talk reverts to the Fed or the money supply, but I think this is important. It is important because if too many don't grasp the basics of our monetary system then anytime some political firebrand or troll starts ranting, they'll just join in without grasping what they're ranting over.

Now, let's get serious for once. Let's all first agree that money is desirable and the most liquid form of medium which is also necessary to the smooth functioning of our economic system. After all, it means no one has to lug around a suit case full of old baseball trading cards, stamps, or precious emerald rings with which to barter for what one needs. Hence, at the very least, having five fifties in one's billfold is a lot easier to carry around - say to purchase groceries or that new DVD player, than 450 TOPPS baseball cards from 1954!

So we get that one out of the way!

Next, let's agree that printing money is not necesarily evil but essential! Nor is it "treasonous" - unless done to undermine a country's financial stability - say via a crazy freelancing terrorist printing billions of counterfeit bucks on his desk top computer. Indeed, the printing of money is an essential role for the Federal Reserve, and incorporated as one of its Constitutionally designated mandates via the Federal Reserve Act of 1913.

Printing of new bills is especially important as....DOH!...money wears out! Have you seen some of the tattered pieces of crap floating around lately? Who wants to handle those? In addition, money is one of the dirtiest things in existence. One enterprising group of biochemists - as reported in Science magazine two years ago- tested a host of filthy bills and found they had more bacteria on them than the back of a toilet seat. No wonder they said to wash hands after handling it! "Filthy lucre" is obviously more than a saying.

Then there's the blood on a lot of money, mainly a result of impacts from cocaine cowboys and drug cartels. Even a dollar bill that may look clean on the surface may have hundreds of microscopic blood flecks on it, invisible to the naked eye.

So, there's a definite role to print more bills to replace worn out or degraded existing ones.

In addition, it is absolutely insane to assert that there must be a limit to printing money! Assume, for example, that five years after the Fed came into being, a law was passed that they could not print more than 1 billion notes of each denomination, ever! That is one billion ones, one billion fives, one billion tens, one billion twentys, one billion fifties and one billion hundreds. (Under a special dispensation they'd be allowed to also print 1 million thousand dollar bills, but no more).

This printing dictate would translate into a total of $187 billion, and would then be the ultimate limit on the Fed. The only other printing allowed would be to replace worn out bills.

For a population of about 100 million in 1918, with only one billionaire, this might be okay. Take away one billion, and then each remaining person would be allotted $1,860 on an "equal distribution" basis. But, of course, the possession of money is never fixed - so it remains in one pair of hands - it is constantly moved through the system, via purchases, enterprise, work, selling bonds or what have you. We call the speed with which money throughputs its velocity.

The velocity of the money supply is taken by dividing the total GDP by the total money supply. This results yields the average number of times each dollar turns over to buy the goods and services during that year. Say then there's now a GDP component of $15,000 billion and a total money supply of $10,000 billion, then the velocity of money is: V = 15,000/10,000 = 1.50 per annum. Thus, from this, each dollar will be spent 1.5 times in purchasing goods and services. Not very much, but then people - consumers are saving more than ever before.

But let's get back to the law of fixed printing! If that same hypothetical law from 1918 were in existence today, NO ONE would have any money to speak of ! The total of 186 billion would now be divvied by access among 310 million population, to make $600 each for maximum access to money! Now, if there are currently 100 billionaires (including overseas tycoons with money parked here in the U.S. hence partaking and affecting the money supply) then that is reducd to $86 billion divided by 310 billion or $277 each.

That is, the maximum money any given American could obtain or access, all other things and factors being equal, would be a measly $277. And if tax policies were adjusted in just the right ways for the rich to benefit (say by huge tax cuts, including on capital gains) and they were allowed perks and subsidies the hoi polloi weren't, you could expect the have nots to lose their quota of that $277 over time, until nothing was left...and the richest and most financially adept controlled it all. Result? Massive unemployment, massive loss of consumer demand...likely also investor demand (since only the mega-rich could invest) and hence, a veritable banana republic! Oh, and nearly everyone in massive debt since - without money- they'd have to borrow to get anything, even food!

Is this what Perry wants?

Even assuming he doesn't, and he means the Fed printing money in the absence of proper incentives for capital formation and investment, he still is mistaking the map for the territory. By that I mean he's confusing money with the money supply

To give an example of how it breaks down: In 1983, M1 had $500 billion, M2 was $1.5 trillion and M3 was $300 billion. Thus, the total came to $2.3 trillion. In effect, most of the money supply was not even in liquid cash of the type Bernanke (or Paul Volcker at that time) would presumably be "printing" to get Perry's dander up so much. From this, we conclude that Perry is totally ignorant or not concerned with the major money supply components, M2 and M3, and only with the most liquid M1.

Perry's obsession with "printing money" in the M1 domain is in some ways understandable, but in many ways not - especially for a guy who purports to have aspirations for the presidency. One would think he'd know more about this stuff!

For example, Perry's obsession over the Fed "printing the money" and changing the dynamic on a political whim is absurd. For one thing, the Fed - though called "Federal Reserve" - is not part of the Federal government proper. It was created in 1913 as an independent banking enclave with 12 Federal Reserve districts and banks whose charge is to broker money into the nation's banking system. In a real sense, the Fed is "the Banker of Bankers". They create money and broker it to the banks, charging a small interest as they do, and banks lend money out with a higher interest rate to recap what they paid the Fed.

But the Fed is certainly not the only party who "creates money"! Say you have a $10,000 government or corporate bond and you sell it to a local bank, then they put that money on their books, and in effect, the "supply" of money has increased by $10,000 - thanks to YOU. Are you now "treasonous" as well for creating money? Of course not! You simply made a basic transaction. Conversely, when you repay a bank loan by giving the bank a check, say for $5,000, the bank gives you back an IOU and at the same time lowers your deposit balance. If a bank sells a bond to an individual the same reduction occurs. Thus, banks create money when they lend or buy securities, and "destroy" money when their loans are repaid or they sell securities.

The fact these transactions occur by the billions each day shows that even if the Fed "printed a billion dollars" a day it wouldn't make much difference. Not to the total money supply of M1, M2 and M3 components. Indeed, the Fed's easy money policies (QE1, QE2) of the past three years haven't even had much effect on the country's economic health. Nor has it engendered inflation which would be the natural outome of an excess of M1 money being produced.

Indeed, in this terribly low aggregate demand environment what we are seeing MUCH more of is deflation, or too little money chasing too many goods - thus consumer demand slows, halts ...until prices come crashing down. This also explains why consumers aren't purchasing, say for new school supplies, as they normally would. They are still trying to dig out of too much debt to afford to get into new debt. They don't have the money! This is also why a number of economists have insisted the best way to help the situation is to reverse it, and engender more inflation, at least for a time. That would entail creating more money, yes, but as we'll see in the next instalment there are other ways to achieve a goal - especially since money intrinsically has no value. Its value inheres in what it can purchase at a given time. In addition, "printing money" is by no means the only way to debase its value! (I.e. creating so much extra money that the value of all money in relation to the goods that it can purchase, plummets - which is what Perry and his Monetarist zealots are all about!)

In a real sense, based on what I just wrote, it is the ordinary banks who are often the culprits in the piece, especially in terms of using leverage to buy unsound securities (usually with risky derivatives buried inside). To give an example of leverage, or rather being over-leveraged, if a bank has checking account deposits of $10 million but only $1 million in reserve then it's leveraged by a 10:1 ratio and only has $1 to cover every $10 it may have to potentially redeem. THIS is the real "printing money" crime, but it comes when banks use money they can't cover to buy securities, etc. they can't really afford.

This is exactly what led to the financial meltdown in 2008 when banks by the score purchased risky credit default swaps(basically insurance contracts) which they were unable to honor when they came due, because they lacked the money! They were over-leveraged, often as much as 33:1 (see the documentary Inside Job).

The Fed then is the rescuer of last resort, since it's job is to ensure the banks are properly covered and have enough reserves to pay all comers. If they have to print money in order to do this, yes - they will do so. It's better than forty million people unable to get their money out of banks to pay their bills, and setting the cities on fire!