Is This Country Ready To Be Totally Destroyed? 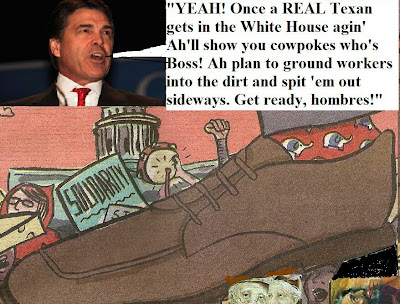 As Texas Governor Rick Perry, the wannabe Secessionist and Confederate sympathizer tosses his hat into the Reep candidate pool, this is the $64 question. We are already on the ropes as a nation, and in full serious decline, as an impossible political impasse combined with the further use of "hostage taking" (demonstrated in the debt ceiling debate) comes to fruition.

Add that to revenue draining "wars" (actually occupations) which remain unpaid for, and...well, you could say we're headed for the dumpster.Exceptionalists don't wish to believe this but it's there in plain sight. One of the best evidences of fundamental political insanity was on exhibition two nights ago in the Republican debates when the candidates were asked if they'd accept any taxes if there were spending cuts TEN TIMES the size of the taxes. These freaks to a person said 'NO!' Now, as the blog DailyKos put it so quaintly: "If that isn't fucking insane, what IS?"

What it also shows is none of these candidates or their terrorist party will represent anything a reasonable person can negotiate with. These vermin don't want to negotiate, they want to destroy...this country.

Now enter, Massa Rick Perry, who claims he's the "real Texan" and Bush Jr. wasn't. Why would anyone turn the reins of power over to him? Well, because we have such a plethora of dumb people who can actually vote, especially fundamentalist religious fools that will buy any guy talking "God", it's feasible.

Look for Perry's campaign to brag endlessly about his "job creation" powers in Tex-Ass as opposed to Obama's feeble efforts in DC. Look for Perry to insist that he can bring the same job-creation acumen if he's elected President. How many dumbasses will be there to believe it? Likely too many, because as usual the corporo-vanilla media pundits refuse to do their jobs. It's left to bloggers like me to pick up the slack.

For one thing, Perry's job creation in Texas must be looked at not through his fractured PR prism, but a finely honed lens. If one does so, one sees the increased jobs have come at an enormous cost to the state in its quality of life. This is because Perry managed his "jobs miracle" by massive spending cuts with the money "saved" going toward blood money for any corporations that would set up shop in his state - oh, along with giving them extended tax holidays! At the same time he's throttled labor and environmental regulations down to the minimum so no company entering Texas need worry about being busted for ....anything. OSHA, you paying attention?

Perry's grand state ranks 47th in the country for state spending on schools, and its performance - abominable - is reflected in all national tests from the SAT to the scholastic tests in history, geography conducted each year. As for physics, not one in one hundred high school Texas kids will ever see the inside of a physics lab. As for lab equipment, 'string and sellotape' takes on a new meaning in Tex-Ass, and we won't even go into how the biology curriculum will now feature a new book with chapters on creationism and intelligent design. Or how Jefferson Davis and the Confederacy will now be taught alongside Abe Lincoln and the Union in U.S. History!

Texas also leads the nation in creating crappy minimum wage jobs without benefits – the number of minimum wage workers increased by 150 percent between 2007 and 2010.

At the same time, as Texas' citizens are exposed to these carcinogens in their air and water, probably engendering 100,000 new cases of breast, lung, liver and bladder cancer each year. Texas has also massively cut spending on its healthcare, so anyone unfortunate enough (like one of those minimum wage workers) to acquire one of those cancers and needs treatment will likely have to declare bankruptcy after receiving it.

This same Texas template for "job creation" is what Perry plans to bring to the nation! Can anyone say "Third World America"?

Sure you want Rick Perry, America? Be sure you think that one through really hard before you put this asshole into the oval office, or we will all live to regret it!

And, btw, for anyone who thinks Obama is "bad", please recall the old saw about jumping "from the frying pan into the fire"!
Posted by Copernicus at 10:04 AM