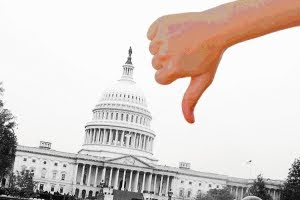 So now the news is in: Standard and Poor's, the same credit rating monarchs that mis-rated credit default swaps in 2007-08 (giving them 'AAA' instead of BBC) have "downgraded" the U.S. credit rating from AAA to AA. In other words, we're now (in their terms) on the level of Slovenia and Luxembourg in terms of credit worthiness. What does this all mean, if anything?

In practical terms there's been little impact. Readers will want to note that two of the other big three rating agencies did not downgrade the U.S.'s credit rating when they made their own calls in recent days. (Though Moody's did assign a "negative outlook') In objective, quantitative terms (and weighting all three ratings firms equal) it translates to a credit downgrade by 1/3, or maybe a rating of:


Hence, this downgrade may not immediately change anything and U.S. Treasurys will still be desirable in an uncertain world. (I'd definitely warrant they'd be preferable to anything Slovenia or Luxembourg had to offer!). Bottom line here: the U.S. retains the best reputation as a place to park capital, buy securities or invest in government debt.

Why the negative overtones? Blame most of it on the insane Tea Party radicals of the Repuke contingent, who could have easily agreed to just pass the debt ceiling increase cleanly - with no fanfare- and not make such a noise. Especially, not insist on using the debt ceiling as leverage to parlay their ideology into policy decisions that wouldn't have a rat's ass of a chance of passing in legislation. Not with the TEEpee brand claiming only one half of congress.

At the same time, Obama shares part of the blame for this, make no mistake. Standard and Poor's, recall, had asked for not only a clean debt ceiling increase but also at least $4 trillion delivered in revenue or cuts. This lump sum could have been delivered from December last year, had Obama and the Dems only disallowed the ghastly extension of the Zombie Bush tax cuts! I mean, taking out ALL of them!

In addition, that didn't require any active legislative moves, merely passively allowing them ALL to expire! (Middle class and for the richest). But, instead of acting with simplicity and delivering $4 trillion in revenues, they acted with political calculation and manipulation - defending the middle class cuts (which comprised over 3/4 of the total!) and attacking those for the wealthiest.

And, instead of crafting a solid narrative on WHY all these tax cuts needed to expire (i.e. that if not expired they'd threaten social programs down the road if spending cuts were called for to make up the deficit difference), they wimped out and allowed the repukes to seize control of the language and debate as they usually do. It was sickening to behold and one of the biggest reasons why Obama could never be counted as a true Socialist. A true Socialist would have allowed ALL Bush tax cuts to sunset for the common welfare!

In addition, had they an ounce of gumption, they could have included the debt ceiling raise with the tax cuts issue (even if they only passed the middle class extension).

Why did the Dems and Obama punk out again? The ostensible reason given was to "protect" 13 million unemployed from losing their benefits - which the repugs had tied to the deal: no tax cuts, no unemployment benefits extensions. The problem is, that while the 13 million were granted their extensions of benefits, it was at the cost of more than 43 million who now stand to suffer with this odious debt ceiling deal! (Via Medicare, Tri-care and Social Security cuts). Evidently, the Spock-like Obama had never heard of Spock's first maxim (enunciated at the end of ST III):

So, having yielded with the Bush tax cuts, and not even tied the debt ceiling increase to them THEN, Obama and his Dems set themselves up as hostages to be taken in the next two rounds, which occured with the federal budget deal in March, then the Aug. 2 fiasco that will ensure poor economic growth for at least 40 quarters.

I ask you, folks, is it any wonder I am a Democratic Socialist as opposed to a Democrat? I ceased believing in the Democrats long ago, though I did vote for Clinton, as I did Obama - because the alternatives were simply too much to take.(It may be true all presidents end up as 'puppets' but why add toxic puppets to the mix?) That doesn't mean I liked the choices! What happened to the Dems? Why did they mutate into such perpetual wusses?

I ascribe most of it to the infusion of corporate cash. According to Michael Tomasky, writing in The American Prospect the Dems eschewed political point-making and "hard nosed", no-holds barred political partisanship sometime in the early 70s. They replaced it with discussing fact-based policy points, which appeal to "reason" and "temperance" but do little or nothing for core partisans. The very people Dems need to get out to the polls each mid-term election.

Tomasky attributes this substitution of "rational" policy talk for good, old-style politicking to a loss of identity that particularly accelerated with the onset of the Reagan plague years. Those years, which saw the rise of the Democratic Leadership Council (DLC, or what I call "corporate Dems") meant the Dem party would eschew its working class roots henceforth for brownie points and campaign contributions (not to mention lobbying perks)from big Business, the corporate and investor classes. Yeah, they might win a few elections, but how does one say it? "They lost the war".

The problem was that, in making this conscious switch of political emphasis, the Dems lost the ability to really fight verbally. Corporate whoredom and being in Neo-liberal thrall inevitably forced on them a 'back-off' mode, and pussification priority. Lest they upset the hands that fed them! No wonder they are constantly one-upped by Repub PR and spin machines, not to mention tea bagger gangsters who defy the Dems to stop them.

Factored into this was the diminution and loss of an overarching and motivating vision which keeps all the Reeps energized and going to the polls, though they may differ on various platform matters and how to implement them (like 'faith-based' charities).

As Tomasky notes(ibid.), the Reeps are unified around a central idea which can be expressed in both positive and negative language: that they are the conservators of liberty and morality, and that liberals are sending the country to hell in overdrive. Whatever Republicans do or don't believe they believe in those two hypotheses. "This unity gives them their passion." Indeed. But the question is what gives dem voters their passion? The answer is nothing, because they don't have any. Cycle after cycle - since the Carter era- they've beheld their visions and ideals debased on the altar of Neo-liberal tripe. Some perspective on this is provided by Robert McChesney in his excellent book, The Problem of the Media, Monthly Review Press, 2004, p. 49:

With the election of Ronald Reagan, the neoliberal movement had commenced. Neoliberal ideology became hegemonic not only among Republicans but also in the Democratic Party of Bill Clinton, Al Gore, and Joseph Liebermann. Differences remained on timing and specifics, but on core issues both parties agreed that business was the rightful ruler over society.

And of course, Obama has admitted to his worship of the "free Market" as well, and hence is another Neo-liberal. Little wonder then he fawns so much over Ronnie Reagan - the character who actually (by his massive military spending and tax cuts) converted this nation into a global debtor and deadbeat.

Before the next election, with the economic signs now portending a moribund future for this country - since spending cuts were chosen over job growth - the Dems and their Neo-liberal collaborators may well wish to ponder these words of JFK:


"For the Democratic Party is not a collection of diverse interests brought together only to win elections. We are united instead by a common history and heritage--by a respect for the deeds of the past and a recognition of the needs of the future." - John F. Kennedy

Common HISTORY and HERITAGE? Deeds of the past? Needs of the future? Any memory there?