President's Day? Nothing To Celebrate Given The Nation Is One SC Decision From History's Scrap Heap - Thanks To Dictator Dotard. "All the accounts together show that Trump is engaged in a serial murder of the Constitution and rule of law. He fires anyone investigating him who wants to seek the truth,  whether it's McCabe or whether it's Comey or even Jeffrey Sessions. He puts in place constitutional jokes like Matthew Whitaker.  He tries to discredit and destroy investigations.  He dangles pardons at people who could help him out in any trials. He declares national emergencies without warrant. He discredits judges. All together  this is someone who is unfit to discharge his duties as our chief executive officer."-   Former Acting Solicitor General Neal Katyal  on MSNBC  'All In'


Even as we learned over the weekend that European leaders (at a global security conference in Munich) now regard Donald Trump as a bigger security threat than Putin, we've beheld the spectacle of more than a half dozen lawsuits being mounted in the U.S. against this renegade orange ape who dares call himself a human and president. Not in my book.  He's a traitor, swine and scumball and no more merits the presidency than being a dogcatcher.

So this President's Day is not a day to celebrate, but  to possibly prepare to mourn the downfall of the latest historical experiment in democratic governance. I refer, of course, to the specious declaration of a "national emergency" on Friday, with Trump even openly admitting he "didn't need to do this".  He just wanted his mythical wall done faster,  for a mythical crisis he fabricated.

Earlier I, like many, held out hope that  the National Emergencies Act of 1976 would have  allowed  the Dem House to short circuit the move.  Basically, nip it in the bud. Thus,an initial House vote to block Trump's folly and overreach would  automatically trigger a Senate  vote and there wouldn't be a damned thing Mitch McConnell  could  do to impede it.

But alas, we've since learned this presumptive check-and-balance mechanism was severely eroded by a 1983 Supreme Court ruling. It held that to have legal effect, such a congressional resolution must be presented to the president for signature or veto.  That would mean a 2/3 Senate majority (67 votes) would be needed to override it, not likely to happen with so many butt -licking Repubs still in Trump's orbit.  (Like Sen. Lindsey Graham, who now plans to take over Devin Nunes' role,  running interference for Trump while Chairman of the Senate Judiciary Committee, i.e. against the Mueller probe and the FBI, e.g.a sneak peek: 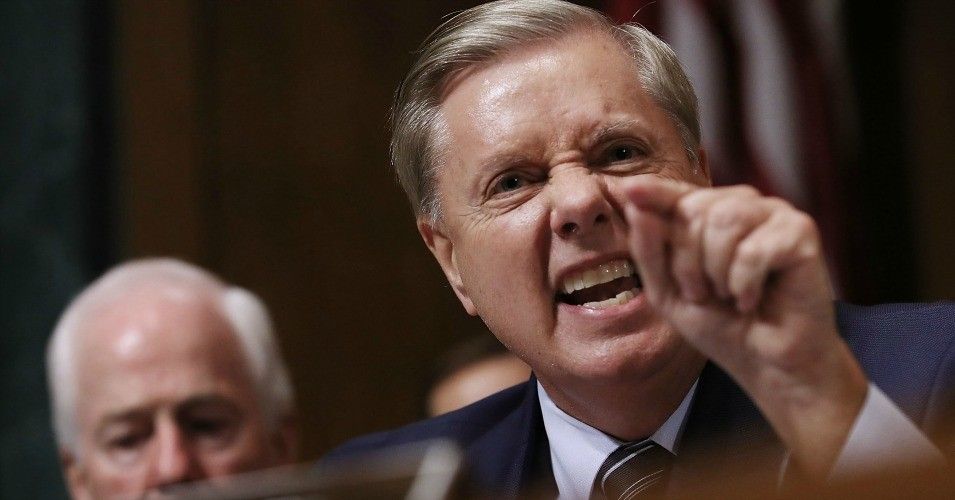 Trump first, country second, even if it means the country going into the crapper. Think I'm exaggerating? Think again!  As legal expert Robert Weissman has pointed out:

"If this invocation of emergency on false pretenses is tolerated, it could justify almost limitless abuses of presidential and military power, including far-reaching clampdowns on civil rights ."

"If the president can merely cry "emergency" to override national law and contravene explicit congressional action—particularly when the claimed emergency is transparently fraudulent—then it is hard to know what limits exist on presidential power. What's to stop the president from declaring an emergency and limiting the right to protest? To round up people of color en masse to combat purported gang activity? To deploy the military on the streets to maintain order? To censor social media and Internet conversations?"

Elizabeth Goltein, a specialist from the Brennan Center for Justice,  e.g

is also not sanguine about the Supremes putting a halt to this blatant destruction of constitutional checks and balances. As she writes in a recent post on (smirkingchimp blog -see link at the end):

"It might seem that the courts would put a quick stop to the president’s antics. But the National Emergencies Act, passed by Congress in 1976, will not make things easy for anyone preparing litigation to stop Trump. The law gives the president complete discretion to declare a national emergency; there is no definition of emergency and no criteria that must be met. As a result, most judges would tend to defer to the president’s determination that an emergency does exist, however much of a stretch it might seem.

That doesn’t mean the president has carte blanche to violate the Constitution under the guise of false emergencies. With sufficient evidence that Trump is acting in bad faith — that he is abusing the discretion Congress granted him for the purpose of subverting constitutional constraints, including the prohibition on spending funds that Congress has not appropriated — a judge could still find that the emergency declaration is invalid....'

But the kicker follows:

"Still, the Supreme Court has already shown its willingness to defer to Trump on claims of national security. When he invoked broad immigration powers to ban travel from majority-Muslim countries after revising the ban twice to deal with objections from lower courts, five Supreme Court justices were willing to credit paper-thin national security justifications and ignore obvious signs of an unconstitutional motive. There is a risk that the Supreme Court or other courts could take a similar approach here — and that they could choose to read the emergency powers themselves quite broadly.

And even if the current emergency is struck down by the courts, it could be a short-lived victory. The next time Trump concocts an emergency, he might be less vocal about his intent to circumvent Congress, and the laws he invokes might be a better fit for his goals. Some of these emergency laws confer extraordinary powers that are ripe for abuse, including laws that allow the president to take over ."

My take then is that if it comes to that fateful SC decision, and Justice Roberts doesn't stand with the court's liberals to oppose this perfidy, we are all for the high jump. Kiss this nation's democratic and constitutional future goodbye because, in effect, Adolf Dotard Drumpf could then even resort to a "national emergency" to halt or indefinitely postpone the next  general election.   One thing we've learned during Trump's vile occupation, never ever underestimate the degree of his reprehensible rat-like nature.

What about mass citizen protests across the land? Well, they might work but maybe not because so many citizens' brains, minds have already been sucked into Trumpism, at least to the point they are so weak on the outrage monitor they give it an effective pass.

This is one of the most egregious problems afflicting our nation currently or what NY Times Michelle Goldberg has called the "catastrophic awfulness" of his presidency. In a nutshell, it is that too many are becoming inured to it or desensitized. Indeed, some who were once sane and normal are extolling Trump as some latter day "savior" somehow rescuing our Republic. Others are reading this twaddle and letting it colonize their brains like one of the worst memes or mind viruses.

Of course, pro- Trump propaganda and outright balderdash often lies at the core of the subversion process.  For example, a recent National Review piece by one Victor Davis Hanson tops the cake in terms of sheer odious glorification of the mad swine fouling the White House.  This Trump butt kisser actually compared Trump to Shane in the movie by the same name. In fact, if one watched the movie, Shane (Alan Ladd's character)  had principles, self-respect, self-awareness,  intelligence and a moral compass - all attributes that Donnie Dotard lacks - in spades.

In the film - part of which was shot on location in the Grand Tetons of Wyoming -   where we visited the cabin used on the set (while on our Yellowstone trip in 2000), e.g.

We see Shane protecting his homestead and hearth from all nefarious comers. In his piece, Hanson takes this as a cue to compare Trump to Shane, e.g.

"Daily, Trump tweets retorts to his myriads of attackers. No one is too big or small to win exemption.  All that mattered is if anyone drew first on Trump he would empty his six shooter back in a way quite disturbing even to those who invited him in...Trump could no more stop tweeting and ridiculing than Shane could put down his guns".

Truly, a gross and distorted analogy.  So it's well to  recall Shane protected and defended the vulnerable and dispossessed, including women and kids from the bad guys. He did NOT cage infants and have border troops fire tear gas at fleeing mothers with infants! He was never the bad guy himself wreaking havoc on one and all.   But this is what the nation has now come to: idiots like Hanson, Lance Morrow and others now making every excuse for Trump and comparing him to heroic figures, e.g.

But Trump is no heroic figure or even a decent human being, as Mick Mulvaney even admitted back in 2016 when the pestilence first seriously mounted a campaign,

Trump is an ongoing, uncontained national dumpster fire,  burning and disrupting every civilized norm, and spreading rot and disintegration to the Constitution itself. This is no longer a game - if it ever was- and has now mutated into an existential fight for the country's future.   As Ben Franklin once put it when asked by a woman if the United States was a monarchy or a Republic:

Well, we are now one Supreme Court decision away from abandoning the Constitution and any meaningful rule of law.

Donald Trump
Trump’s Dictator Move Is the Real Emergency — and We Handed Him the Keys
by Will Bunch | February 19, 2019 - 8:10am | permalink

"So this is how liberty dies — with a rambling, incoherent monologue. President Trump’s bizarre — and, to be brutally honest, frightening — Friday morning appearance in the Rose Garden of the White House to announce that he’s invoking extreme presidential powers to declare a “national emergency” and build border wall that Congress refused to authorize was, in many ways, that moment that Trump’s harshest critics warned about after his shock election as our 45th president.


And yet it was striking that when Trump’s dictator move finally came, there was a lot more banality than evil."

Posted by Copernicus at 7:57 AM