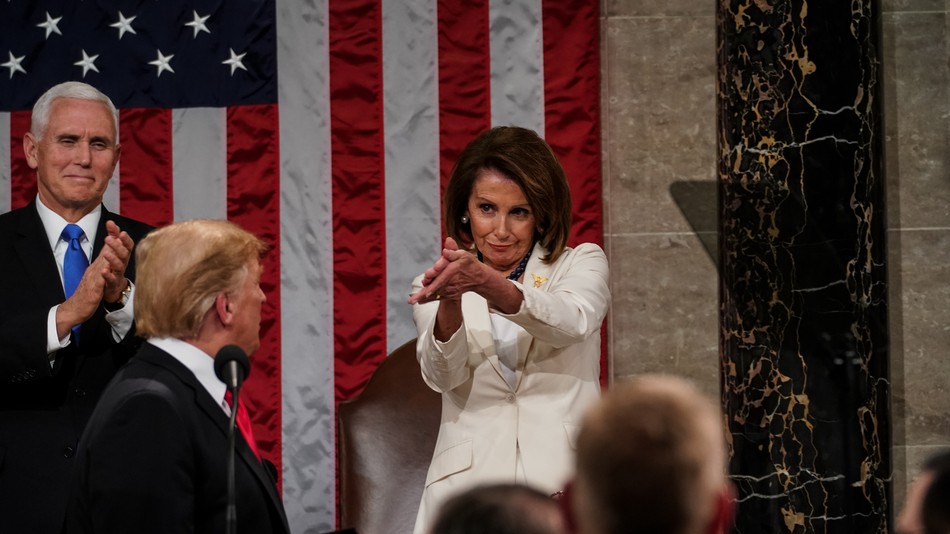 Nancy Pelosi delivers a weaponized 'fuck you' hand clap last night to the charlatan in chief.

"That was a psychotic speech...a mix of cookies and dog poop"-  Political organizer Van Jones on CNN after Trump's State of the Union.

Here are other voices sounding off on Dotard's 82 minute misuse of network time, given I had the good sense not to watch it!


"One tell of a man, of a good man, is his amiable acknowledgement of his opponents' agreeable attributes, which at times is even an honest acknowledgement. When forced on occasion, such a recognition nonetheless shows some magnanimity and an admirable willingness to appreciate legitimate disagreements. (This observation assumes, of course, the actual presence of favorable assets amongst his opponents; otherwise, false praise comes across as little more than a Pecksniffian labor.)


Yesterday, however, we were again bludgeoned by that unpresidential model of a truly bad man. Trump told of himself with striking ease. Speaking with network television anchors at a closed-door luncheon, he proceeded to assess a few opponents with the crudity and vile disingenuity we've all come to expect from this Fifth Avenue con artist turned global abomination."

Donald Trump
Here Are 7 of Trump’s Most Outrageous Lies and Distortions During the State of the Union
by Cody Fenwick | February 6, 2019 - 7:40am | permalink

"As Toronto Star reporter Daniel Dale has noted, Trump’s on-script speeches tend to be much more accurate than his off-the-cuff rally tirades, which are filled to the brim with lies and distortions. When he speaks from a teleprompter, his staff produce formalized comments that sometimes withstand fact-checking scrutiny better than his usual claims.

But he still made many specific, demonstrably false claims. The greatest lie, though, was the basic premise of his speech: a supposed call for unity. Instead of a unifying rallying cry, it was filled with much of his typical divisive attacks and vicious fearmongering, particularly about immigrants.

Here are seven of his other false claims and distortions Tuesday night:

1. “After 24 months of rapid progress, our economy is the envy of the world, our military is the most powerful on earth, and America is winning each and every day.”

The implication here that Trump’s presidency oversaw a huge resurgence in the military and the economy is just flat-out false. The United States’ military has been the world’s biggest (and most wildly expensive) for generations long before Trump came around. And while the economy has continued to grow under this president, it has essentially carried on the trajectory it started under President Barack Obama.

Trump's State of the Union was exhausted, ugly, and simply devoid of any ideas

"To call Donald Trump’s Tuesday night State of the Union address “chaotic” is giving it too much credit. That term implies some sort of manic energy. And “rambling” doesn’t capture the way in which the speech sandwiched a lot of general nastiness between two slices of generic calls for “unity,” by which Trump was clear that he meant everyone doing just as he wants. The best way to describe the speech is simply “atrocious”: listlessly delivered, horribly written, and above all free of any meaningful content.
If a State of the Union speech is supposed to be where the White House declares its vision for the coming year and beyond, what Trump demonstrated most convincingly is that he’s blind. A speech from Barack Obama or Bill Clinton might be full of lofty goals. Even Stacey Abram’s brief response carried with it a sharply packaged list of possibilities. But Trump’s speech was a hair’s breadth from being absolutely empty."

"Just a few weeks ago, I joined volunteers to distribute meals to furloughed federal workers. They waited in line for a box of food and a sliver of hope since they hadn’t received a paycheck in weeks. Making their livelihoods a pawn for political games is a disgrace. The shutdown was a stunt engineered by the President of the United States, one that defied every tenet of fairness and abandoned not just our people – but our values." - Stacy Abrams


Nancy Pelosi invents the F**k You clap for Donald Trump. Internet has ...

— from Alternet
Posted by Copernicus at 9:28 AM