What Exactly Was That "Ghost Particle" And How Was It Detected?

Artist's conception of the blazar in Orion  that emitted the ghost particle (aka neutrino) detected at the Ice Cube facility in Antarctica.

As usual, the media in stories about this "revolutionary" astrophysical find, chooses terms like "ghost particle" aiming to elicit plenty of clicks.  In fact, the term can apply to any neutrino precisely because one of the properties of these near massless particles is the ability to pass through an enormous amount of matter without causing any reaction. Like the cartoon character "Caspar the friendly ghost",  they can literally pass through walls. In fact, only about 1 in ten billion neutrinos traversing a matter barrier equal to Earth's diameter, reacts with even a proton or neutron.

Hence, by virtue of being unaffected by normal matter, radiation or gravity we have "ghostly neutrinos".

In the case of the recent discovery-  announced Thursday at the National Science Foundation- we learned one and only one neutrino "made the cut"  in being detected by Ice Cube. This neutrino arrived from a "blazar" - a hyper active galaxy in the constellation Orion, 3.7 billion light years distant - and hurling neutrinos like particles from a cosmic ray gun.  Indeed, the international team assembled in D.C. for the announcement believes the neutrino- spewing blazar to be the first known source of higher energy cosmic rays to reach Earth.  See also:

This particular neutrino intercepted the Ice Cube detector in September, 2017, with an energy of 290 terra electron volts. (Recall here that 1 eV = 1.6 x 10 -19 J) . That energy is some 40 times greater than similar particles produced in the Large Hadron collider.   But how do we know, what signature do we have, that it was a neutrino?  Also what type of neutrino?  Recall I had discussed three different types in an earlier post, the electron neutrino, tau neutrino and muon neutrino, e.g.

In the current single neutrino case from the blazar, it appears we have a muon neutrino - based also on archival data. We suspect it is an actual neutrino because the little bugger generated Cherenkov radiation, and hence able to move faster than the speed of light c, in ice.   Some accounts have the muons moving faster than light, period, which is incorrect. It is faster than light in the ice, e.g. forming the Ice Cube detector.   Moving faster than light through a medium like ice, the muons, electrons spun off, glow or flare.   It is the sensors in the ice of the Ice Cube that "spotted" the flares and from that - and some useful statistical analysis (see bottom of post) the neutrino interaction was deduced.   The initial discovery was confirmed by astronomers at 20 different observatories. The find itself caps almost 20 years of work by a collaboration comprising 300 astrophysicists and astronomers (you can more easily see their names appended to the pdf version  of one of the papers accessible at the end.)

OK, so how did the above reference "confirmation" take place? Well, lo and behold, at nearly the same time , the Fermi Gamma-ray Space Telescope   detected an increase in energetic activity from the same direction as the blazar. Coincidence? Nope, the contributing researchers don't buy it, mainly because the rigorous statistics indicates a physical connection. Readers can read the end conclusion in the paper for yourselves. (Of course, the uncertainty is measured in so many standard deviations and these measurements aren't entirely free of them so the participating team members can't be 100 percent sure, but they're maybe at least 70-80 percent sure. Which is a pretty good marker in astrophysical research!

Some 8 years ago, I wrote at the end of a post ('Neutrinos Then And Now',  Oct. 26, 2010  about the planned construction of the "Ice Cube" neutrino detector in Antarctica. I wrote at the time:

"Many other physicists and astronomers are interested in detecting neutrinos from much more distant objects, such as supernovas, and colliding galaxies. To that end, an enormous neutrino telescope detector called "Ice Cube" is being constructed inside an ice field in Antarctica. (See attached image). Its sensors will be aimed not only at the sky but toward the ground to detect neutrinos from the Sun and outer space that are coming through the planet"

The image shown at the time was extremely crude with virtually no details, but the one I show below basically indicates the most critical aspects. 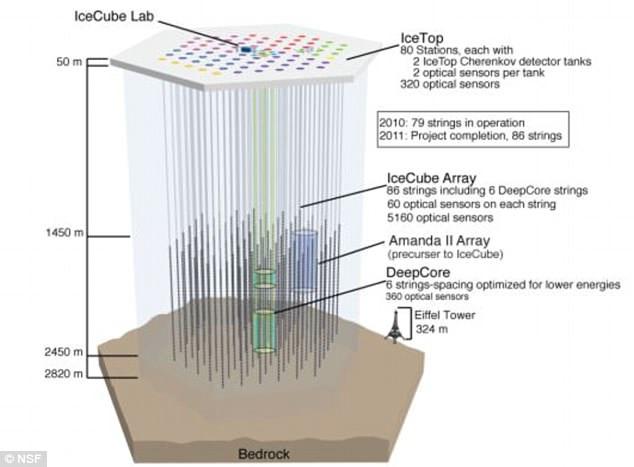 The Observatory seen in macro-frame:

-In-Ice Sensor Network.   Engineers used hot water to melt 86 different holes a mile deep or more into the ice. There they lowered also 5,160 electric-optical sensors  then allowed them to freeze in place.

- Deep core:  The sensors are able to detect the flare (glow) from a rare neutrino- normal atom collision as the neutrino speeds through the array. The signal is then relayed to the surface, accurate to within 5 billionths of a second.


- When the neutrino collides with a proton or neuron a particle called a muon emerges. It radiates blue light as it moves through the ice along the same path as the neutrino.

The full paper of the discovery referencing one aspect (using an analysis based on self-correlation of multiple neutrinos, prior to the specific Ice Cube Alert)  for those interested may be found here:
http://science.sciencemag.org/content/361/6398/147.full

The key conclusion to note is:

The analysis of the Ice Cube-170922A event in (20) relies on correlation of a single neutrino with electromagnetic activity, whereas the analysis presented here relies only on self-correlation of multiple neutrinos. The coincidence of an Ice Cube alert with a flaring blazar, combined with a neutrino flare from the same object in archival Ice Cube data, pinpoints a likely source of high-energy cosmic rays.

The other paper referencing the single neutrino capture based on the simultaneous Fermi gamma ray Space telescope detection - prompting the Ice Cube alert-  can be found here:
http://science.sciencemag.org/content/361/6398/eaat1378.full

Of  course, there are always going to be pseudo conspiracy wackos who try to skew scientific or astrophysical finds into spurious conspiracy ideations, like this:

Let's review again these neutrino flavors for good measure. If there are three flavors: electron, muon and tau, then there must be three different corresponding neutrino masses which we can call: m1, m2 and m3.Further, the three "flavors" are really different superpositions of the 3 basic neutrino mass states.  Moreover, and to make it more complex, we know that quantum interference between mass states means a neutrino originating in one "flavor" can transmogrify to another over its transit.
Because of the oscillations and quantum interference we need to reckon in a "misalignment" between flavor and the basic neutrino masses. This is done by reference to three independent "mixing angles": Θ_12 , Θ_23  and Θ_13. To a good approximation, oscillation in any one regime is characterized by just one Θ_ij and a corresponding mass difference, defined:

As an example, the probability that a muon neutrino of energy E acquires a different flavor after traversing distance L is:
P = sin2 Θ 23  sin2 (l23)

Posted by Copernicus at 1:21 PM