Could 12 Average American Kids Have Survived The Ordeal Of The Thai "Wild Boars"? Not A Chance! 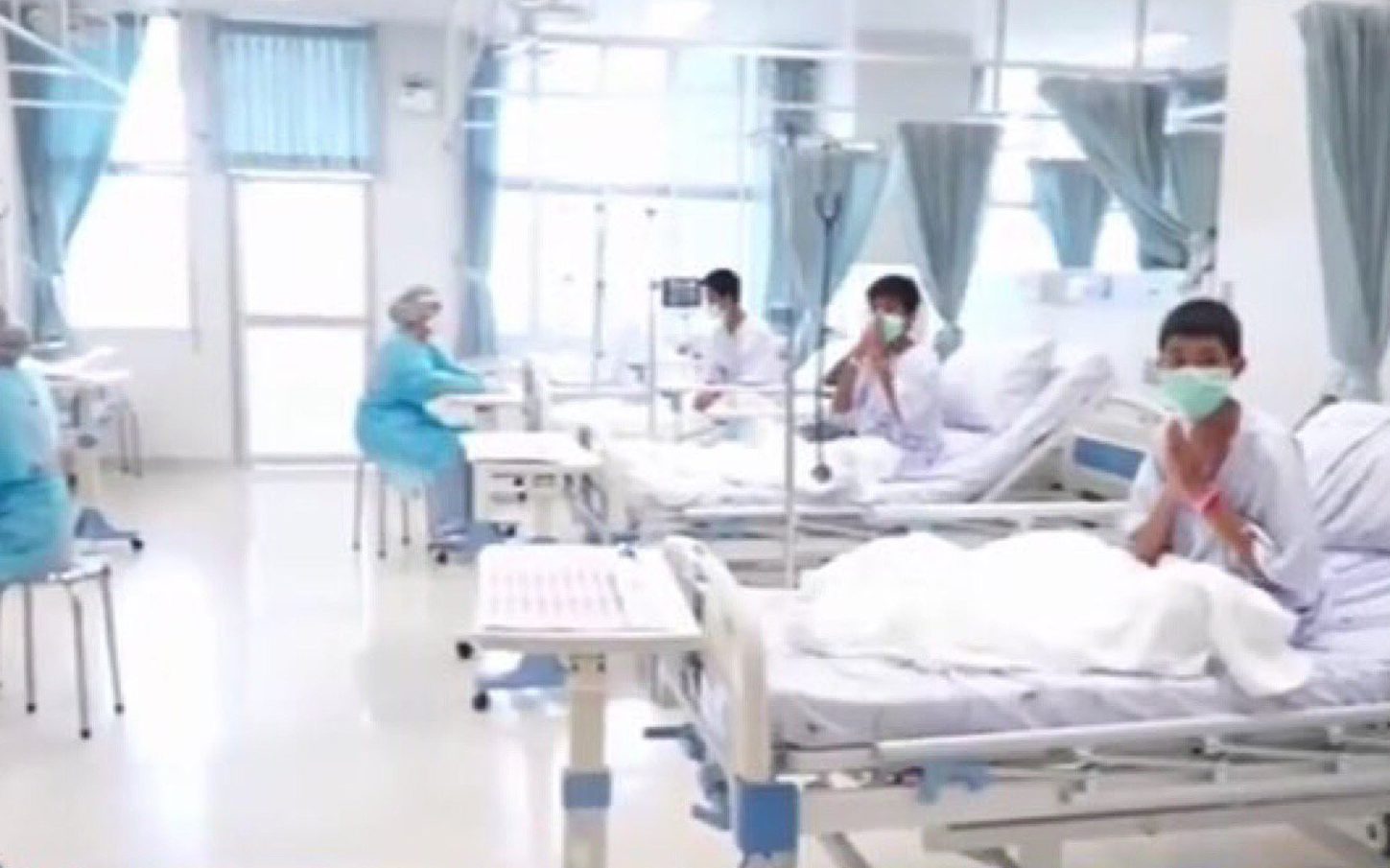 Hospital scene showing some of the Thailand "Wild Boars" team recuperating after their 17 day cave ordeal. Could American kids have survived such an ordeal? No way in hell.


By now the story of the cave rescue of the "Wild Boars" kids' soccer team from northern Thailand is well known to anyone not living under a rock. The twelve members of the team, aged 11-16, had been cooped up in the bowels of the formidable 2.5 mile long  Tham Luang cave system with virtually nothing but water- dripping down from the cave top -  to drink for 17 days.   World class divers were dispatched to retrieve them in a complex scheme that is more than Hollywood film worthy.
The boys and their coach lost an average of 2 kg (4.4 lb) during their 17-day ordeal but were generally in good condition and showed no signs of stress, according to a senior Thai health official.  The kids, now recovering in a Thai hospital, reflect an amazing cohesive social dynamic, one predicated on a communitarian - as opposed to individualist - culture, which also values self- discipline over entitlement.  That also was reflected in the assistant coach, isolated along with them.
We now know 25-year-old assistant coach of the Wild Boars - Ekapol Chanthawong -is being hailed by relatives of the boys as the quiet hero of an adventure that almost ended in tragedy. (Hours after the last boys and coach were taken out the water pumping system broke down and the cave flooded, preventing Thai Navy seals from recovering equipment left behind.)
We also know Chanthawong once practiced as a novice Buddhist monk and one of the first things learned is meditation.  There is no doubt at all he would have used the techniques he learned to ground and center those 12 boys over their 17 days of isolation.
This elicits the question of how an average group of 12 American kids would have fared under the same conditions. My take is they would be lucky to have lasted three days in total darkness without losing it. I suspect even if they had a mentor like Chanthawong it wouldn't have made too much difference, because they wouldn't have taken him seriously.
Why not? American kids are spawned in an entitled, ME-ME-ME social culture, in which parents endlessly kowtow to their every whim - something that would be unthinkable in Thai culture.   They are also overly addicted to their smart phones and without even those they'd go bonkers in a hurry,  trapped hundreds of yards below the surface with no food in a deep cave. This would be despite having their devices with them (since the cave configuration prevented any GPS or other cell signal reception).
Let's be clear, too many kids today firmly believe they rule the roost rather than their parents. And it is the parents' own fault for making them believe so.  According to studies disclosed in a 2012 WSJ piece ('A Field Guide to the Middle Class U.S. Family', p. D2, March 13), this has now become the nature of the American middle class: perpetual wimps - giving in to anything their kiddies want, and worse, sometimes even acting as their slaves.

The study of interest was conducted by researchers at UCLA's Center on Everyday Lives of Families (CELF), and geared to 'in vivo' or real life observation, rather than in labs. The studies, using video cameras to record family interactions in middle class America, Samoa and Peru's Amazon, showed how widely children are treated across cultures.
The CELF U.S. videos showed parents doing most of the house work and not asking any kids to help out - even to clean their own room. In one video scene, an 8-year old named "Ben" is shown sprawling out on a couch demanding his dad untie his shoe, then when he does - to put the shoe back on and tie it up again. The dad complied each time like a trained chimp.

In Samoa, by contrast, the CELF videos showed children serving food to their elders and waiting patiently until these elders have had their designated selections and started eating before they eat. They couldn't just come to a table and  lunge or grab at food like many American kids. In Peru's Amazon girls no more than 5 years of age were required to climb trees to harvest papaya, and must also help (along with the boys) to haul logs thicker than their legs to stoke fires.
While Thai culture doesn't make demands on kids to that extent, it also doesn't tolerate any scintilla of disrespect to elders like American culture does.  It also expects kids to help out to do their part for home and hearth and no allowance to be expected! Zero, nada, zilch.
Bottom line: kids in these other cultures aren't waited on hand and foot, nor are they aren't treated like "pals" and they certainly are not permitted to exercise their own wills other than in limited domains.
In respect of the latter, the WSJ Sunday Review 2017 article ('Children Should Be Heard But Only So Much', p. C3, by Jennifer Breheny Wallace) definitely merits attention for those skeptical of my claims in this post.   In her piece Ms. Wallace cites examples of this modern breed of airhead parent:
- Allowing a 6-year old daughter to approve a NYC apartment, not completing the deal until she gave it her thumbs up

- Giving their kids final decision on where to spend the family vacation.

More astounding: In a recent National Retail Federation survey of 1,000 parents,   "67 percent said they solicit their child's opinion before making family purchases and 59 percent said they will not buy an item unless the child approves"

Ms. Wallace adds: "When in doubt parents can ask themselves: What is my motivation behind letting my child make or influence the decision?"

Well, the motivation is parents don't want to piss them off. They want to be friends, have friendly terms. They will do it even to the point of making terrible decisions not in their kids' self interest. The classic example, was 11-year old Mark Garrity Shea who mustered a test of will against his mom, Ms. Brucie Jacobs, in 2000, when the two took off for a jaunt in Botswana.

Mark Garrity Shea - Eaten by Hyenas after he got his own way.

Young Mark had always camped in a tent by himself in his home environs of suburban Maryland and insisted he wanted to do likewise in the Okavango bush of Botswana. After all, what young man at the age of eleven wants to sleep with mom? That's the epitome of babyness, and Mark wanted no part of it..

Had this middle class mom thought deeply about it, she'd have realized the pair were not anywhere near a Maryland camp site, but in the Odavango...one of the last real African wilderness areas left, and certainly not to be treated as a zoo. But she didn't and so allowed Mark to be in a tent sleeping by himself.

She only realized her mistake some time later, after midnight, when she heard her son's frantic screams as he was dragged away by a pack of hungry hyenas. Some lessons are simply learned too late, and  hence are way too painful! Had the mom established the parameters of her will many years earlier - maybe as young as when Mark was two, this awful incident might never have transpired.

So now tell me: Would a random set of 12 American kids, fully marinated in a social "me" culture in which parents kowtow to their every entitled whim, survive like the Thai kids?

Assuming  they also found themselves trapped in a deep warren  like the six mile long  Tham Luang cave system, 2.5 miles to the nearest exit with flooded chambers all the way?  The  key question: Could they have lasted 10 days until found by the first cave divers?  Then lasted another 6 days until being fitted for a six hour extraction mostly under water?  I doubt it, like I doubt Trump could actually read James Joyce's  Ulysses.

After the first three days of joking and razzing each other- perhaps anticipating a quick rescue-   then the overt bullying would set in and they'd end up as dead meat - for the bats.
Posted by Copernicus at 7:35 AM