In Memoriam - My Youngest Brother Mike 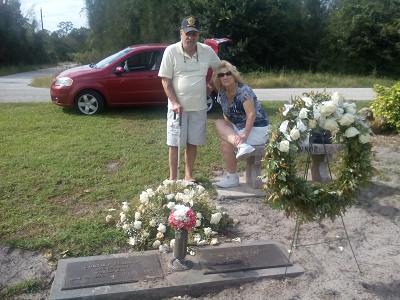 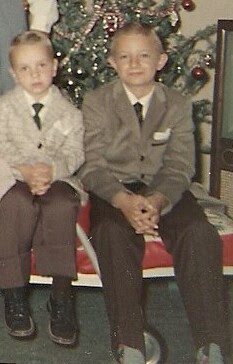 The phone call came in at a quarter to midnight last night from the daughter of my youngest brother Mike(age 64) that he had passed away in the Port Charlotte hospice he'd been in for the past week. I'd known since the end of April that Mike had been battling stage IV liver cancer.  He'd first become worried after a rapid loss of weight (10 lbs.)  that he'd  first brought to the attention of his VA PCP..  Meanwhile, by early April, this VA primary care physician became concerned by his last liver enzymes test- with all the numbers way too high.

A visit to the ER on April 24 - after experiencing extreme pain in the upper abdomen-  resulted in the ER attending   "feeling a 'lump' in the right abdominal area".

A   subsequent CT-scan with contrast showed  "a mass of cancerous -like spots" .  But the doctors wanted further tests, namely a liver biopsy, to confirm what they suspected.   The problem was that when the VA PCP submitted the order for a biopsy the VA officialdom nixed it. They informed  Mike and the VA doc that in their (VA) opinion "it was not an immediate, life-threatening condition".  Mike informed me of this in an email and I told him to screw the VA and just use his Medicare to get the biopsy done, even if he had to shell out 20 percent of costs (he had no Medicare supplement).

He did so and the results came  back -  for the worst -  by May 3rd. They showed that he had inoperable liver cancer with tumors throughout the organ. By then Mike had dropped nearly 45 pounds and was barely able to eat  "a few bites of scrambled egg" at a time.  He sent several photos by email, each showing more and more weight loss. By now he also opted to go in for hospice care, which his Medicare approved. This was given the oncologist had given him only 1-2 months to live at most.

When I last spoke to him on the phone two weeks ago, he was barely able to move, to get up or walk and had to wear a Foley catheter, also had the hospice nurse coming in three times a week. A week later, he needed a level of care he was unable to get even at home.

Make no mistake that my youngest brother and I diverged and disagreed on almost every  conceivable topic and issue for two brothers related by blood. And this was even more than I differed from my middle brother Jerome (who died of a burst abdominal aneurysm in August, 2016) and my second brother John (who died in May, 2013 of  congestive heart failure).

For example, Mike was a hard core NRA member and  gun owner (I already noted his February 18 guest post on Brane Space) as well as a firm believer in Trump and his agenda. We had actually been blog enemies for a while, and "Pastor Mike" via his  "atheist registry",  drew national attention back in 2010, e.g.
https://www.mediaite.com/online/florida-pastor-calls-for-an-atheist-registry-media-points-and-laughs/

But by November, 2014, and after my mom's death, he  had a true  "come to Jesus" moment and dropped the harsh evangelism.  Indeed, he had sent me an apology via email for all the atheist attacks he'd committed for years - including blog posts with photo-shopped images of all my friends, as well as Richard Dawkins, Stephen Hawking et al in "hell".

Mike was a committed conservative, and we disagreed on much more than we agreed on, but he will be sorely missed, especially in the spirited exchanges we've had in recent years.  He is survived by daughter Ciara and son Dylan, as well as by me and sister, Jo-Marie (with whom both of us have been incommunicado since 2014). He will be cremated then his remains buried at military cemetery in Punta Gorda, FL with Marine Guards in attendance and a folded flag to be given to Ciara.

Rest in Peace, Mike. Perhaps you'd have lived longer had the VA been more on the ball!
Posted by Copernicus at 7:44 AM