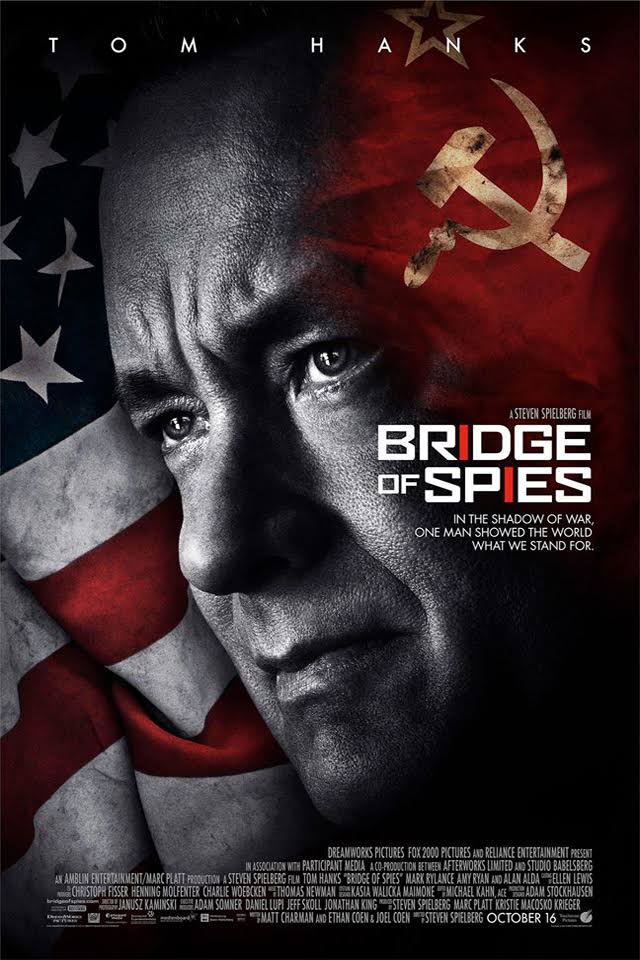 As readers may recall I've sometimes raked actor Tom Hanks over the proverbial coals, especially after his once planning a 13- part series on the JFK assassination for 2013 - with the emphasis on Vince Bugliosi's revisionist history tome, 'Reclaiming History', see e.g.

Fortunately, that planned series was scrapped by HBO, owing to previous Hanks' efforts (e.g. 'The Pacific') not making the ratings expected. Just as well, as the last thing needed is more pro-Warren Commission bunkum by amateur history buffs.

Anyway, Hanks more than redeems himself, certainly as a serious actor, in 'Bridge of Spies'.  He plays the Cold War negotiator James B. Donovan, a one time insurance lawyer pushed into the spotlight of Russian-U.S. relations by being asked by the government to defend a Russian atomic spy, Rudolph Abel.

The main body of the film is the intense negotiations to get Powers' release from the Soviets, who insist on getting their own top spy Abel back. Many complications arise especially with the East Germans who captured another American, a grad student named Pryor,  leading Donovan to try for a 'double' exchange - the 2 Americans for Abel.

My main interest in seeing the film was the  portrayal of the spy exchange, of which I had been unaware in terms of Donovan's career.  What I had been aware of was Donovan's role in  helping to secure the release of the Bay of Pigs  prisoners,  along with Washington lawyer William Attwood - who was also instrumental in the subsequent efforts at rapprochement with Castro's Cuba.

The background for the U2 incident I already knew from released FOIA documents, including that earlier Eisenhower had established 'The President's Board of Consultants on Foreign Intelligence Activity'. The Board concluded that the CIA's clandestine services were "operating for the most part on an autonomous and free-wheeling basis in highly critical areas."

Its primary recommendation was that Ike fire CIA Chief (Allen) Dulles or that he at least accept an administrative deputy to keep tabs on him. Ike's "reward" was sabotage of a hugely important Big Four Summit (Russia, France, Britain, U.S.)  set for May 16, 1960. Richard Bissell, chief of the clandestine services saw to it that the U-2 flown by Francis Gary Powers on May 1, 1960 tracked a route over the USSR that ensured it would be shot down. (The U-2 fleet at the time had been dubbed 'RBAF' for Richard Bissell's Air Force, see e.g. Record No. 157-10011-10020, 'Testimony of Richard Bissell',  June 9, 1975, SSCIA, released under the National Archives and Records Administration)

Alas, none of this background - including the impact on the Summit - was provided in the Hanks- Spielberg film, but this was perhaps understandable as they didn't want to complicate the plot too much - or even the background (CIA agents were nevertheless depicted suspiciously in several sequences.) Still, those who lived at the time would recall the main headline was the torpedoing of the critical Summit, not so much Powers' plane being shot down.

The Agency also lied directly to Eisenhower, telling him that should the plane be shot down neither the pilot or the aircraft would survive. (In a similar fashion, barely over a year later, Bissell would lie to JFK and insist failure at the Bay of Pigs was "impossible"). Eisenhower had declared the cut off date for all U-2 flights as May 1, expecting the flights wouldn't go beyond the last 2 weeks of April. However, Bissell sent Powers up exactly on May 1st, knowing what would transpire by that additional overflight. In the process, Bissell effectively set policy himself (clearly at the behest of Dulles) and with the collapse of the Big 4 Summit, succeeded in destroying détente at that time - and at least for another 25 years.

Would the film have been more interesting with these other details incorporated? Yes, probably to those of us into deep politics and the history of the deep state - but likely not so much for the average viewer.  Sadly, even the demographic of the viewership we beheld  at this one showing was limited - mainly to those 60 and over. We didn't see a single millennial or even Gen X'er. We hope some of them do get to see the film - especially as it truly nails the paranoid atmosphere of the time. Also, it faithfully captures the 'duck and cover' baloney (pushed on Donovan's younger kids). The biggest laugh? One of the kids filling the bathtub telling his dad they'd need water after "a 50 megaton bomb went off" since all the pumps would be down. NO thought that a 50 megaton blast would make saving water the least of their worries!

If you want to get a really authentic peek inside the Cold War years, and particularly if you weren't alive then, this is a film you really need to see - especially if you're now aware of the background to the U2 incident!