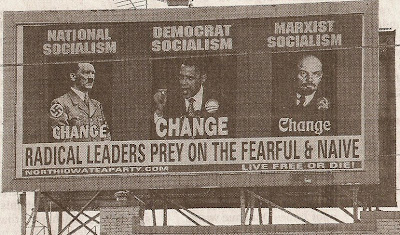 One of the difficulties that corrupts debate on the blogosphere, as well as online political forums, is the failure of so many to correctly interpret political party names. That is, merely because a national party may use the term "socialist" doesn't mean it really is, any more than a party which uses the terms "liberal" or "democratic" can be taken literally. By extension, certain national names themselves cannot be literally taken to be what they proclaim. Common sense ought to apply here, but in many cases (e.g. "National Socialism" of the Third Reich), common sense alone can't discern wheat from chaff. One needs education too!

For example, 'the Democratic People's Republic of Korea' is nothing remotely democratic. North Korea is one of the most totalitarian regimes on Earth, has no democratic elections, or democratic institutions and even mocking the great leader in a cartoon can invite death.. Ditto with 'The German Democratic Republic' (DDR) which was the title used for East Germany - but not to be taken literally!

Thus, the guard towers I saw near the East German border at Allendorf in 1985, clearly showed no element or aspect of that country being "democratic".  No nation that would shoot its own people for trying to leave could be called democratic.

Another example: Angela Merkel's Christian Democratic Union party is not "democratic" say as an analog to the U.S. Democratic Party. it is more a center-Right or conservative party.

The news that Justin Trudeau and his "Liberal Party" won the recent Canadian election, also has assorted nattering nabobs and untutored pundits painting that  party erroneously as "liberal" when it is in fact a moderate centrist party. The actual, bona fide liberal party in Canada is the New Democratic Party. (But even this can't be compared to the U.S. Democratic Party which is much more Neoliberal then liberal!)

Then there is the most colossal mislabeling and woeful misinterpretation of all, "the National Socialist Party" of Hitler's Germany, deemed to be "socialist" by too many who are not properly educated on history or the nature of German fascism at the time.  Thus, by virtue of this monumental ignorance, billboards such as the one at the top of this post can be created- and alas, literally believed by too many.

“The oppositional forces on the Left, such as the Communists and Socialists were crushed, cowed and powerless”

This was in reference to Hitler dispatching his S.A. thugs in the early 1930s (and later S.S. after "the night of the long knives" in 1934)  to beat and kill Socialists (the REAL ones,)

Thus, the actual members of Hitler's NSDAP party would regularly - as Kershaw writes- : "beat Marxists, socialists, and any leftists on the streets while holding up signs that read: “Tot dem Marxem!” (Death to Marxists!)Kind of a damned funny way to show kinship with REAL Left Socialists!  Now, if these "geniuses" who insist Hitler "wasn't of the Right" are correct, then WHY beat up on Marxists, Socialists and Commies of the LEFT? Huh? Can these illustrious nabobs answer that? Of course not, because the facts of history contradict their absurd reconstructions, i.e. of democratic socialists being the same as National Socialists.

How can we educate people to back off from such erroneous conflation? The short answer is we can't because their takes are based on personal beliefs not facts. Thus, their warp and woof is to always reinforce their preconceived notions. They pick out one or two things or aspects they believe relates to the true nature of the party under question (e.g. seizure of guns or strong gun laws) then illogically extrapolate that to be a fundamental characteristic. Hence, their preconceived notions lead always to a predictable confirmation bias.

Foxites that regularly tune in O'Reilly believe a constellation of untrue things, and that leads them to collect — even invent — bad information to flesh out what they already believe.  The classic case is the dupe who by virtue of some streak of bad life decisions or experiences comes to believe "all liberals are liars". He then somehow finds Larry Schweikart's fishwrap book on '48 Liberal Lies About American History' and finds specious support for his false knowledge and bad insights. So again a classic case of confirmation bias.

No one said that learning history was easy, especially because these days it's often rewritten and exploited to drive current agendas. But my claim has always been that if one digs deep enough he can separate fact from fiction. And, if all else fails, maybe he can take a trip to the nation of controversy - say Germany - and actually talk to those who lived history instead of getting it second hand, especially from ignorant sources.
Posted by Copernicus at 8:19 AM