The Predicament of St. Paul's School - Caught Up In Unwanted Controversy Over Its "Senior Salute" 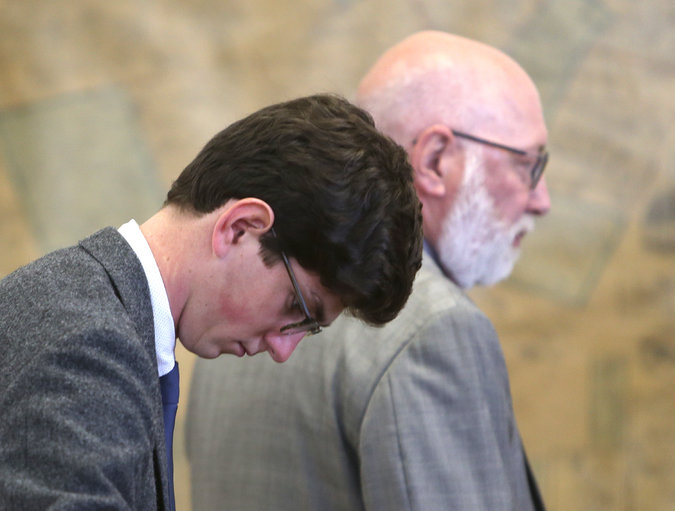 Owen Labrie - next to his lawyer - hangs his head during part of the court  proceedings.

"Students and graduates of St. Paul’s School, which is embroiled in a high-profile rape case, are passionately defending the elite institution on social media with spectacular levels of arrogance and tone-deafness. They're dissing “haters,” implying that criticism of the school is inspired by jealousy and essentially giving the media the middle finger"

This is in the midst of the trial of Owen Labrie, a recent St. Paul’s graduate charged with raping a girl who was 15 at the time on the roof of a campus building. The first full day of testimony was Wednesday, when the accuser took the stand, tearfully describing how she told Labrie “no, no, no” before he allegedly penetrated her.

Labrie's lawyer, Jay Carney,  described Labrie's and the girl's rendezvous as part of a ritual known as the "senior salute" - a St. Paul's tradition.. The lawyer  actually intimated that  girls were generally honored to have such attention visited on them since it's a venerable tradition and right of passage.. Even as the clip played on CBS News I couldn't believe what I was hearing. Seriously?

At the same time there is the vigorous defense - aggressive and preemptive I would say - of so many seeking to defend this elite bastion. But this is understandable. The school has a long and venerable history - since 1856 (not as long as Harrison College, f. 1733) and has turned out some fine people. If one checks its website one will find a place packed with high end resources for its boarding students. It is a high caliber academic venue every bit as impressive as Harrison College in Barbados or Choate, JFK's prep school (now Choate- Rosemary Hall following a 1971 merger). Hence, its associates - past and present students as well as teachers- would be vexed to behold so much negative attention in the media. No elite bastion, educational or other,  wants to see its good name dragged through the mud of unproven allegations.

The problem inheres in all places of educational and social privilege which also bear proportionate levels of accountability, and responsibility. I would also add to that,  a proportional sense of noblesse oblige, i.e. 'Whoever claims to be noble must conduct himself nobly' . That means even when under fire - or when one's beloved institution is under fire- one conducts himself with grace and class.

Sadly, what Flory- Clark references is more an ignoble,  knee jerk response  that is undignified for the residents and graduates of St. Paul's.  I.e. that the reactions hitherto are  all part of a media-driven feeding frenzy fed by a bunch of vipers and jealous proles who couldn't get into such an esteemed school if their lives depended on it. Maybe that explains  some small subset of the reaction,  but surely not all.

But anyway, St. Paul's is not unheard of in my own history. I actually have fond memories of a St. Paul's science teacher - Walter Hawley (and his wife Lenore)  who would sail his yacht 'Cordelay' into the Bridgetown Careenage in the 1970s and invite my wife Janice and myself aboard for great food, conversation and wine. Walter and I would  also smoke a cigar or two while discussing our respective interests in astronomy - me, solar flares and sunspot morphology, and him, variable stars. . Best of all, it would always be under pristine starry skies before light pollution and Sahara dust diminished the night sky quality in Barbados. We'd  treasure such interludes because it provided us the opportunity to talk serious astronomy - especially of variable stars - which was one of Walter's abiding interests. We'd often stay on his yacht until the wee hours picking out naked eye variables and estimating their magnitudes - at least until wifey began to get seasick from the yacht's yawing and pitching.

We'd also invite him and Lenore to our own Harry Bayley Observatory to  see assorted nebulae, open and globular star clusters, as well as planets (and variables), in our 12 1/2 " (at the time) reflector.  He'd be speechless at the sights and on some occasions we'd be able to set up to do some spontaneous astrophotography.

Let me say Walter was the embodiment of a true gentleman and scholar and how I used to picture a St. Paul's person - whether teacher or student. (He also directed the school's Astronomy Club at the time) . He was a person of class, keen intelligence and ethical quality and I am sure - if any  foul deed had allegedly taken place in his era to expose the school to a jaundiced media eye- would not have reacted with the sort of comical and pathetic “Looking down on the haters #spsfam,” nonsense we behold now.

No, he'd have been too much of a gentleman with judicious temperament to do that and would've advised rising above it.. He'd have exhorted the school's faithful not to give vent to their baser emotions, but to 'ride it out' and take the high road, as befitting a noble institution.  He'd have surely advised against lowering oneself to the level of one's detractors - whatever the stimulus.

A pity that more "St. Paulians" don't seem to grasp that now, allowing false privilege and a sense of exaggerated entitlement to trump that precious attribute of noblesse oblige. Because, in the end, it's the demonstration of noblesse oblige in trying times that defines the truly elite institution.
Posted by Copernicus at 7:54 AM