College Board Backs Down on AP U.S. History - WHY? 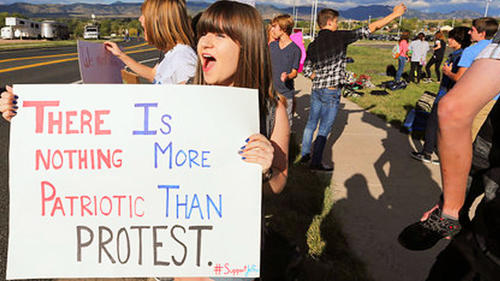 Jefferson County students protested last year as their school board attempted to push a non-controversial version of AP U.S. history.

As the segment on CBS News yesterday evening put it:

"Students might not notice the changes, but AP  U.S. History teachers will. For example, western expansion where in the last AP version the focus was almost entirely on the negative impact of western settlement on the native American populations".......Now, not so much, as the points of view of the settlers themselves - how great it was to take all that Indian land - will dominate.

"When you change the story to one of pioneering spirit and economic opportunity it's not just a change in emphasis. It's  a lie."

So the College Board has evidently acquiesced to the promulgation of lies about U.S. history - to placate raving Right wingers intent on substituting a rah-rah patriotic veneer for what really transpired..

So what was the genesis of this egregious change?

Almost a year ago, I posted about the kerfuffle in Jefferson County, Colorado - after a misbegotten local school board sought to revamp the latest AP History recommendation. This triggered protests from thousands of students who wanted their history straight - not perverted, "positivized" or rendered like mush. The teachers also were in full revolt as they should have been, since no teacher worth his or her salt ought to bend over to replace genuine historical  content -however sordid and painful-  with PR, and mischievous malarkey. That sort of crap leads inevitably to the swill we behold from clowns like Larry Schweikart and his  '48 Liberal Lies About American History - when he's the one doing the lying!

Anyway, like 6 other states Colorado law allowed local school boards to override school districts and impose their own history content, such as for AP studies, courses.  Taking advantage of this, the Jefferson County school board held a closed door meeting (wherein most nefarious deeds get hatched) that created the original uproar

At the meeting, Board Vice President Julie Williams proposed that a committee be formed to review the current Advanced Placement History Curriculum and change it. She wrote in her goofy proposal:

"Materials should not encourage or condone civil disorder, social strife or disregard of the law. Instructional materials should present positive  aspects of the United States and its heritage."

Of course, thinking teachers and students mocked this gibberish via Twitter. Two of the tweets that appeared were:

"Roe vs. Wade was about the best way to cross a river."

"The Declaration of Independence refers to a song by Beyoncé"

As I noted if the JeffCo proposals succeeded one would never learn about:

- The basis for the American Revolution, or be allowed to read Thomas Paine's fiery 'Common Sense'

- The Haymarket Massacre and the influence of labor unions in U.S, history

- The Sand Creek Massacre and the betrayal by the U.S. gov't of its signed treaties with the Indians - to take their land.

- The use of propaganda by Edward Bernays to goad the U.S. into WWI

- The assassination of John Kennedy and the role of the CIA in it,

- The pretext for the Vietnam War in the Tonkin Gulf Resolution wherein it was falsely claimed that the U.S. fired in N. Vietnamese gunboats in international waters after being fired on first.

- The My Lai massacre

- The false pretext for the Iraq war and "Operation Iraqi Freedom"  pushed by Bush, Cheney and the Neocons like Paul Wolfowitz,

Now, however, it seems all those omissions (and more) may manifest as it appears the College Board - after initially siding with the students, e.g.

has opted to side with the conservatives' shiny, smiley, bullet point view of history - accurately described as "RNC talking points".  Evidently, the massive shit fit pitched by these ahistorical ninnies - bawling their asses off that U.S. history would now be "corrupted" - got the College Board to back down.

The changes are essentially contained in the document 'Course and Exam Description; AP United States History ' - basically guidance on what the final exam will cover. The new recommended course topics will now include:

- The American ideals of liberty, citizenship and self-governance

- The productive role of free enterprise

As Prof. Holhoffer puts it:

In other words, totally regressing to the earlier mode of indoctrination of students for assimilation into the corporate state. As authors D. Stanley Eitzen and Maxine Baca-Zinn note in their wonderful book, 'In Conflict and Order', p. 443:

"The schools perform several vital functions for the maintenance of the prevailing social, political and economic order.  Through their curricula, testing, and bureaucratic control, and emphasis on competition, the schools reflect the social class 'structure' of society  by processing youth to fit into economic slots similar to those of their parents.."

What drove the reversion to imparting corporate false consciousness and historical revisionism? Last year's well thought out changes were not accepted in knuckle-dragger states like Texas, Oklahoma, North Carolina, South Carolina and Georgia - as well as in the capitalist bastion of Jefferson County, CO,  which all screamed "Unpatriotic!" and  "went on a rampage, pushing for changes to the original changes"

Really, Ben? Seriously? Or are you talking out of your ass again? Methinks the latter is the case. One wonders how you ever managed to get on the staff of Johns Hopkins with blabberwash like that! Of course, Carson's blurtations and those of other Reeptards weren't surprising given the Republican National Committee adopted a resolution specifically calling the original changes "biased and inaccurate accounts of many important events"

But the underlying subtext - unexpressed-  is that they were terrified the changes might promote civil disobedience. I mean god forbid Americans ever do that, or were reported to have done that! But if one only conformed to authority no change would ever come, which evidently escapes these jackasses. And without change there is no history!  Rosa Parks would have remained in her place and not violated "authority" by moving to the front of a bus in Montgomery.  Martin Luther King would have remained in his Atlanta  church and wrote sermons and never taken to the streets of Selma, or Birmingham.  Vietnam protestors would have stayed in their university classrooms and never made a single protest sign or marched. Oh, and JFK would never have printed $4.2 billion in U.S. Notes outside the Federal Reserve system,  e.g.


wouldn't be the first time that an organization backed down after conservatives went ape shit. 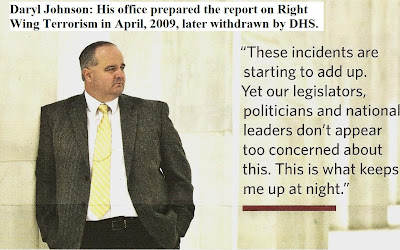 Recall some 4 years ago Daryl Johnson tried to warn about increasing right wing terrorism:   His April 7 report, headed, Right Wing Extremism: Current Economic and Political Climate Fueling Resurgence in Radicalization and Recruitment analyzed the causes of the surge in right -wing extremism since Obama's election, and which included numerous incidents - including nearly beating to death of dozens of Obama voters, supporters. They traced nearly all the incidents to the election of the nation's first black president.

The report, alas, was short circuited when one office (or official) inside DHS leaked it prematurely to the media, which then had a field day with it - mainly the conservative zombots of FAUX News etc. along with Lush Limburger. Subsequently, Janet Napolitano's DHS reacted to the stream of criticism by withdrawing support.

The episode disclosed the power of the right wing and its media in the country - to actually cause a government agency to back off if they screamed and squealed loudly and often enough. So in a way one shouldn't be surprised that a similar coordinated hissy fit would sway the College Board on its recommendations for AP History.

I mean, it takes a lot of cojones to stand up to these yelping infants hurling their feces every time something doesn't go their way.

Let's hope that's the case, and there are no penalties including on the exam. As Jefferson County history teacher